Meghan Markle and Prince Harry’s move to Frogmore Cottage in Home Park, Windsor, is well-documented. And, while they may be new to the area, they’re sure to feel more than at home very quickly. That’s because they won’t be far from relatives, who are sure to welcome them with open arms. Not only do the Duke of Sussex’s grandparents, Queen Elizabeth II, 92, and Prince Philip, 97, spend much of their time in the area, Prince Harry’s aunt and uncle live there too.

We’re a lot more fortunate because we live so much closer to the Queen.

Sophie, Countess of Wessex, 54, and Prince Edward, Earl of Wessex, 55, shared some insight into what their family life is like, during a 2016 interview with Rhiannon Mills for Sky News.

In the chat, the couple, who live in Bagshot Park, just 11 miles from Windsor, revealed how they and their children, Lady Louise Windsor, 15, and James, Viscount Severn, 11, spend their weekends.

And, it seems that the young royals enjoy much of their time off school with their grandmother, the British monarch.

Some of this time is spent having tea with her, as well as enjoying the expansive countryside, such as riding horses.

She spilled: “We’re a lot more fortunate because we live so much closer to the Queen.

“So, when she spends a lot of time at Windsor at weekends, our children are more fortunate because they can go over and have tea with her on a regular basis.

“So we do see quite a lot of her, and we’re over there most weekends riding.

With Prince Harry, 34, and Meghan, 37, also now living in Windsor, Berkshire, it’s likely that they’ll also be close enough to head over to see the Queen on a regular basis.

And, as the royal baby grows older, the youngster may also get to enjoy having tea with their great-grandmother.

Elsewhere in the interview, the Countess of Wessex spoke of her daughter’s shock when discovering that her “Grandmama” was in fact the Queen. 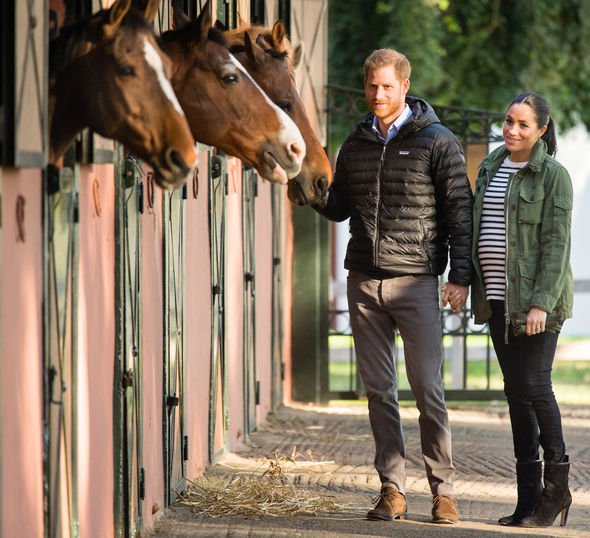 The Duke and Duchess will spend some time enjoying the arrival of their newborn privately, they have confirmed this week.

A statement from Buckingham Palace read: “The Duke and Duchess of Sussex are very grateful for the goodwill they have received from people throughout the United Kingdom and around the world as they prepare to welcome their baby.

“Their Royal Highnesses have taken a personal decision to keep the plans around the arrival of their baby private.

“The Duke and Duchess look forward to sharing the exciting news with everyone once hey have had an opportunity to celebrate privately as a new family.”

Meghan and Prince Harry have been issued a warning on the topic of facing pressure to release photographs of the little one, by a relationship expert.