This interview contains major spoilers from the season finale of Yellowjackets.

Melanie Lynskey and I are going to talk about the tragic final twist in the Yellowjackets season finale in a moment. But first, I’m still reeling from the opening minutes.

Shauna, with an electric carving knife, in the bathtub?

“I know, right?” said Lynskey, 44, who plays the adult version of Shauna on the buzzy psychological horror series Yellowjackets, streaming on Paramount Plus, about a high school girls soccer team that becomes stranded in the wilderness after a plane crash in 1996. We’ve seen just enough to know that their time in the woods didn’t end well, especially not for those who wound up literally butchered and eaten by the survivors. But it’s pretty clear that surviving — which is to say, having been reduced to murder and cannibalism — took a toll as well. 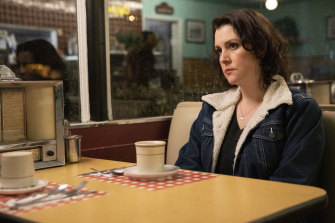 Case in point: the relative calm with which the adult Shauna, in the present day, dismembers her new boyfriend … to hide the evidence of having accidentally stabbed him to death with a different, nonelectric knife.

“There are moments with this character when we have to remember that she’s operating on autopilot,” Lynskey said of Shauna. “There’s a problem, and she’s just like, OK, let me get through this part of the problem until another problem arises. She’s just trying to keep one foot in front of the other.”

Lynskey, a New Zealand actress whose Kiwi twang morphs into a flawless American accent on Yellowjackets, was calling from her daughter’s bedroom last week in Atlanta (“I’m hiding,” she explained), the city where she’s shooting the coming Hulu series Candy. In that series, she plays a woman on the other end of a blade: Betty Gore, a Wylie, Texas, woman who was murdered with an axe by her best friend, Candy Montgomery, in 1980.

“I like things with a little bit of darkness,” Lynskey said. “I like seeing how normal people can get to a desperate point.”

Lynskey’s high-profile roles in Yellowjackets, for which she earned a Critics Choice Award nomination, and in Adam McKay’s star-studded apocalyptic Netflix satire, Don’t Look Up, are the latest successes in a career that, in recent years, has included major roles in the HBO series Togetherness (2015-16); in Macon Blair’s 2017 critically beloved film, I Don’t Feel at Home in This World Anymore; and in the FX on Hulu historical series Mrs. America (2020).

But although the parts and the budgets keep getting bigger, the roles are still the kind she loves to play: real women, wrinkles, curves and all.

“A lot of women out there look like me,” Lynskey said of Shauna’s come-as-you-are appearance. “That was really important to me.” 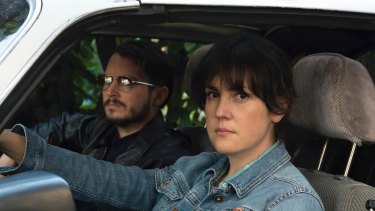 Melanie Lynskey and Elijah Wood in a scene from I Don’t Feel at Home in This World Anymore.Credit:Allyson Riggs

In an interview, she discussed her favourite fan theories, Shauna’s uncanny resolve and the one thing she told the writers her character would never do. These are edited excerpts from the conversation.

Q: First things first: Where does Shauna find the resolve to chop up her lover’s body in a bathtub? We even see it when she’s in the wilderness in high school, volunteering to slit the deer’s throat.

A: I’m hoping that we meet members of her family so we can see why she is who she is. She seems like a completely self-sufficient person even before she’s stranded in this situation. I think there’s something inside her that’s a little bit scary even to her, but it feels like the most honest part of herself.

Q: It’s not just young Shauna who butchers animals — as an adult, she guts a rabbit in the kitchen. Are you squeamish when it comes to blood?

A: I’m a vegetarian — I haven’t eaten meat since I was 10 years old. I didn’t want to have to do that with a real rabbit, so they made me this crazy prop rabbit — it was all magnets, sticking pieces together. It looked so real!

A: She’s able to switch into a cold, calculating veneer that I don’t know if I have — I guess I must, because it can come out of me. But she’s also someone who has a great capacity for love, so we’re alike in that way. She’s a lot more confident than I am, but she still has moments of self-doubt, which can lead her to make some of her biggest mistakes.

Q: What about when it comes to survival skills?

A: If I’m going anywhere, I have to read every single TripAdvisor and Yelp review just to make sure the hotel is going to be as nice as I need it to be. I’m very particular, very princess-y. When I was a child, I went to nature camp for a few days, and the entire thing was torture. At the end of it, everyone in the class had to write a letter to the person who impressed them the most, and I got every letter because people were like: “You got through it. You cried the entire time, but somehow, you did it.”

Q: Let’s talk about Jeff (Warren Kole). Why does Shauna stay with him?

A: Before the wilderness, there was chemistry, and they really liked each other, but Shauna felt like it was temporary. And then she came back from this experience with a ton of survivor’s guilt. But she’s not dealing with any of it — she’s just stuffing it all down, and she feels like the responsible thing to do is to now marry Jeff. She’s scared to look too closely at “Who is this person I’m with?” in case she has to do something difficult. It’s a similar situation with Adam [the former lover in the bathtub, played by Peter Gadiot], where she just kind of jumps into things. She’s so scared of finding out something she doesn’t want to know that she just lets things happen to her.

Q: How much did you know about Shauna’s character going into the series?

A: The writers had told me what happened to Jackie [Ella Purnell], because when she started appearing in front of me in flashbacks, I said I needed to know specifics. And I knew the trajectory of the Adam relationship. I knew the trajectory of the Jeff relationship and that he was the blackmailer. I think sometimes writers are scared that if an actor has all the information, they’re going to give things away in their performance, but it’s helpful for me to have so I can do something layered that’s fun for people to go back and watch.

A: When Jeff and I are driving back from brunch with Jackie’s parents [in Episode 6], we’re talking about Jackie, and I say, “Do you wish you had ended up with her?” And he says, “No, I was just the high school boyfriend.” We’d never had a conversation about that, and that’s something he knew Jackie had said because he read Shauna’s journals. And so I was able to react to that moment like, That’s a bit interesting. I don’t know why he said that or how he knows that.

Q: To clarify, Jackie is for sure dead — she’s not pulling a Van?

A: As far as I know. I don’t see how she comes back from [freezing to death]. [Laughs.] And I think Ella’s contract was always just a year.

Q: A slew of fan theories about Shauna have cropped up on social media. Do you have any favourites?

A: It was so interesting to me that nobody was like, “What if Adam just likes her?” Part of it is that it’s a mystery show, and he’s a suspicious character. And part of it is that it’s an unconventional relationship where he’s more conventionally attractive than me, he’s younger than me, he’s thinner than me. So it’s very hard for people to accept that that might just be a relationship that they’re witnessing. And then there were some theories that were just so nuts — so many people were like, “He’s Shauna’s wilderness baby.” I wish I could remember all the crazy ones. “He’s Jackie” was a funny one.

Q: What kind of input do you have into your character?

A: It’s not often, but there are times when I read something and am just like, “This doesn’t feel real to me.” When I was about to go on a date with Adam, they had me stealing a pair of my daughter’s underwear — like a thong — to wear. And I just was like, “Guys, first of all, as a mother, no.” That’s so gross. I know that Shauna doesn’t have boundaries, but that’s, like, a step too far. And, realistically, they wouldn’t fit me. There’s no woman in the world that’s going to watch that scene and be like, “I believe that she’s comfortably wearing those underpants.” But they’re very good about listening to me!

Q: Have they told you anything about Season 2?

A: I know they haven’t even gotten into the writers’ room yet, so I want to give them a minute. But I definitely want to ask questions. I really think I probably drive them crazy.

Yellowjackets streams on Paramount Plus.