“You’re not upset or anything are ya, mate?”

“Nah, nah,” replied the man sitting opposite, shifting in his seat.

It was so obviously a lie that I couldn’t help but tune into the conversation occurring at the café table next to me. 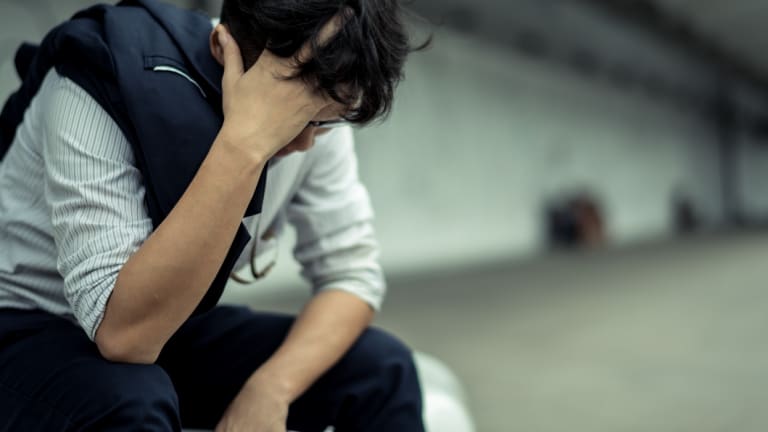 The man who was doing a terrible job of insisting he felt fine was giving three men and one woman an update on the custody battle he was going through in the Family Court.

His mates’ responses were not exactly what you’d call sympathetic.

“He’s probably crying on the side,” chipped in the second man, which drew a round of laughter from the table.

“I think she was just looking around for a good looking bloke to make babies with. She couldn’t find anyone so she slept with you,” said the first man.

“No, she was so drunk she didn’t realise how ugly he was,” added the second man.

Cue more laughter and more uncomfortable fidgeting from the father. Only the lone woman at the table didn’t see the funny side, darting concerned glances at the young father.

The exchange was painful to witness. You don’t need a PhD in empathy to know that anyone going through a custody battle would be “upset”. Nor do you need to be Sherlock Holmes to deduce that this father was particularly distressed.

Opening up and showing vulnerability is difficult to do when your mates don’t want to hear it, or turn your pain into a punchline.

But not only did his mates not encourage him to speak openly about his feelings, their banter shut down any possibility of him expressing himself.

To a witness to this awkward exchange raised questions about the advice routinely dished out by a small army of men’s health experts that men should open up, express our feelings and show our vulnerability. That's pretty difficult to do when your mates clearly don’t want to hear it or if they turn your pain into a punchline.

Associate Professor Michael Flood from Queensland University of Technology and a co-author of The Man Box: A study of being a young man in Australia says many men are poorly prepared by our culture to express emotion — let alone respond to expressions of emotion from other men.

“It is clear that men’s same-sex friendships tend to involve less disclosure, less trust, less intimacy  — and that costs men in terms of men’s ability to seek support, to deal with crises or everyday problems,” says Dr Flood.

“Separation is a perfect example of that. Men and women alike may find separation a deeply stressful experience, but men often have fewer resources than women with which to cope with that because their friendships are less trusting, less supportive and less close.”

This can lead to situations like the one in the café, where a friend’s distress was met with insults.

But, in fairness to these men, trading insults is a means for some men to express closeness and friendship while remaining within the accepted boundaries of masculinity.

Melbourne academic Dr Peter Gill, who teaches psychology at Victoria University in Melbourne and has researched the role that insults play in male bonding, says that insults can help to satisfy men’s core emotional needs.

“For men, showing affection, showing weakness, showing a need for other people is taboo. So what do you do if you’re a man? You’ve still got that need. You have to adapt – you have to find ways of getting it while maintaining your masculinity. It’s not ideal, but it is adaptive,” says Dr Gill.

Being able to give and take insults is a male rite of passage; a way of demonstrating that you understand the intricacies of male friendship. To refuse to participate in trading insults might be a sign of social ineptitude. Equally, being too aggressive with insults is likely to get you ostracised.

“I’m not saying it’s ideal, but we certainly shouldn’t be trying to curb this,” says Dr Gill. “If there’s only a limited number of repertoires that men can connect with, and you take one away, then what are you left with?”

Dr Gill says that problems arise when men’s emotional repertoires are limited to just trading insults with each other. Men who understand that they’re acting a role can alter their behaviour to different contexts.

Flood says that there is some indication that young Australian men make a distinction between mates and friends.

“Reflective guys, who have a more expansive gender repertoire, they can be the masculine bloke, they can carry on as men, and do the banter and insults,” says Dr Gill. “And then they can also go home to their wives, girlfriend or partner and be a different kind of man. They understand that masculinity is, to a large degree, a performance.”

And men may be becoming more discerning when it comes to how they think about their relationships with each other. Michael Flood says that there is some indication that young Australian men make a distinction between mates and friends.

“The mates were the guys who you take the piss out of each other, you have fun, you get drunk, you boast, you take drugs or whatever, but you don’t talk about problems, you don’t offer support,” says Dr Flood.

“With someone who’s a friend, rather than a mate, you can talk to each another, you can share personal problems, you can talk about relationships and emotions and so on.”

Thinking back on the scene at the café, hopefully the father has friends,  male and female, who offer deeper forms of emotional support. But the episode underscores the need to change the conversation about men and friendship from one of quantity to one of quality. Men don’t simply need more mates or more talk. They need meaningful friendships and deeper bonds, ones that allow authentic interaction, rather than snark and cheap shots.