One of the assorted jobs Michael Paul Smith had on his way to unexpected fame was as a mail carrier.

“Everything you do, you will learn from it,” he said, “and you will use it later on in life.”

The delivery rounds he made proved useful when, years later, he became founder, chief architect and mayor of Elgin Park, surely the most visited fake town in the United States. The town, frozen in a midcentury haze, exists only in the carefully staged photographs Mr. Smith made with a cheap camera, vintage model miniature cars, tiny hand-built sets and a keen sense of perspective.

In 2010 the Flickr site where he displayed those pictures went viral, and within four years 74 million virtual visitors had spent time in Elgin Park. His letter-delivering experience, he said, helped make his imaginary town as close to real as something nonexistent can be.

“When I was mailman,” he said in “Elgin Park,” a brief 2015 documentary by Danny Yourd, “it made me aware of how streets are laid out, how towns grow. My photographs read well because there is a logic to it.”

A few weeks ago, visitors to the Flickr site encountered a posting saying that Mr. Smith had “moved permanently to Elgin Park,” words he himself chose for the announcement. Mr. Smith died on Nov. 19 in Reading, Mass. He was 67.

His longtime partner, Henry Goldberg, said the causes were pancreatic cancer and complications of diabetes.

Mr. Smith created his photographs using forced perspective, the technique of making an object seem larger or smaller than it really is based on its juxtaposition with other objects. He would place the model cars and miniature buildings and props he had fashioned on a platform positioned just so — the real buildings and trees in the background would combine with the staged materials to create a realistic scene.

He strove for authenticity, putting baking soda on tires for a winter scene because snow sticks to tires, or making sure there was a tiny puddle under an old-fashioned milk truck because blocks of ice inside would melt a bit as it sat at the curb. But, as Daniel Strohl of Hemmings Daily, a classic-car site that first publicized Mr. Smith’s death, noted, the Elgin Park universe was defined to an extent by the kind of model cars that were available to its creator: pristine high-end automobiles that suggested a glossy version of midcentury America. 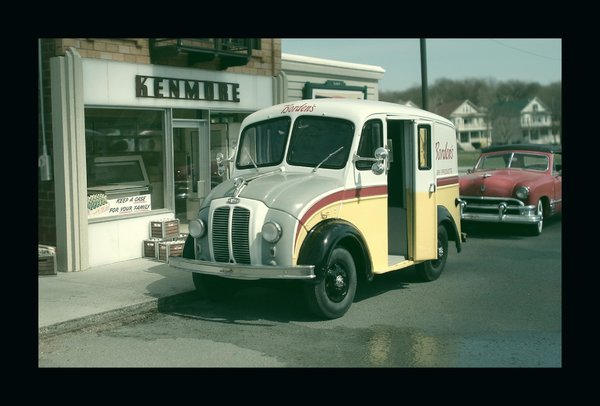 “Given the depth of thought he put into his artwork,” Mr. Strohl said of Mr. Smith in an email interview, “I’d argue that he at the very least recognized that myth and was, in his own way, commenting on how the past can easily be idealized, if not actively scrubbed of its messier aspects.”

Michael Paul Smith was born on Nov. 22, 1950, in Pittsburgh to Roy and Audrey Smith. He grew up north of that city, in Sewickley, Pa., the town that became a model for his fictional one.

A memorial to those who lost their lives in 2018

“Elgin Park is not an exact re-creation of Sewickley,” he told The New York Times in 2010, “but it does capture the mood of my memories.”

Although many of the Elgin Park photographs looked idyllic, Mr. Smith’s memories were not uniformly so. In the documentary, he spoke of being bullied because he was gay.

“It got so bad that the teachers let me leave class 15 minutes before the bell rang because they knew I was getting tromped on,” he said.

His family moved to Auburn, Mass., when he was a teenager, and after graduating from high school there he attended classes for three years at the Worcester Art Museum. He briefly enrolled at the University of Massachusetts at Amherst, then got a job with an advertising agency, working there until a heart attack sidelined him at 33.

He moved to Boston, started a wallpaper and painting company, then made models for an architectural firm. And he developed a hobby: collecting model miniature cars, many of them from the Franklin Mint or the Danbury Mint, both known for their exacting standards.

He posted his first photograph in 2008, drawing little attention for a year and a half. But when a car magazine in England reproduced a few of his pictures, his click count soared.

“The day it hit the stands,” he said, “it went from a thousand hits to a million hits.”

National news coverage in the United States in 2010, including the article in The Times, fueled the interest. Mr. Smith’s work would eventually result in two books, “Elgin Park: An Ideal American Town” (2011) and “Elgin Park: Visual Memories of Midcentury America at 1/24th Scale” (2015), both written with Gail K. Ellison. A note Mr. Smith wrote on the Flickr site in 2010 announcing his first book contract gives a sense of how casual and do-it-yourself his art was.

“What’s most interesting,” he wrote, “is when I started to take the photos of my models, I had no idea what I was doing. I just aimed and shot with the little digital Sony. Who knew you had [to] set the DPI, or whatever it’s called, to the highest setting?”

Complete information on survivors was not immediately available.

Elgin Park (a name that, Mr. Smith said, just came to him and wasn’t related to real towns with similar names) may not be a physical place, but it did become a community of sorts. Mr. Smith didn’t use Photoshop or similar tools, but he invited visitors to Photoshop themselves into his pictures, and many did, in period outfits, goofy costumes and so on, posting the results. But Elgin Park kept its standards.

“This is a family-oriented group,” the site advised. “Please, nothing you wouldn’t want your mother to see. Play nice or risk being run out of town on a rail!”

In the documentary, Mr. Smith reflected on why he created Elgin Park.

“I needed a place that I felt comfortable in,” he said.

“Elgin Park,” he added, “is never a lonely place for me.”