Bushfires do not discriminate. 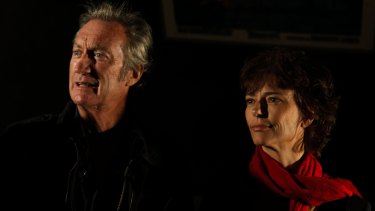 Bryan Brown and Rachel Ward were evacuated from their north coast property.Credit:Ben Rushton

With fires raging across the state, neither fame nor fortune were a deterrent to the flames that have caused such devastation.

Indeed, such matters as Oscar winners or best-selling authors were of little consequence for communities as they fought to save lives and homes with famous and not so famous neighbours pitching in to help each other the best they could. 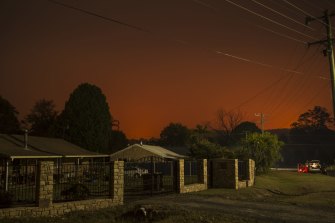 The glow from the Liberation Trail fire outside Nana Glen this week.Credit:Wolter Peeters

Last Friday actor Rachel Ward was evacuated from the beloved farm she and husband Bryan Brown have owned for years on the north coast. 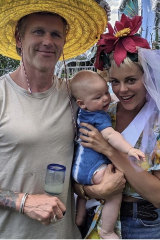 Scott Gooding and Matilda Brown, with their son Zan, have moved their wedding to Sydney because of the devastating fires.Credit:Instagram

The couple had been planning to host their daughter Matilda's wedding on Saturday at the farm, however the family has opted to relocate the celebrations to Sydney after the area surrounding the property was scorched.

Matilda Brown will today marry her chef fiance Scott Gooding, the pair having welcomed their baby son Zan into the world six months ago.

"The family is safe and that is the most important thing, but a house 300 metres away from where we were planning to get married was lost in the fires, we really had no choice but to move it given what has happened up there," Gooding told PS.

Jack Thompson and his partner of nearly 50 years,  Leona King, were ready to evacuate their north coast home nestled in bush land near Coffs Harbour and not far from Russell Crowe's Nana Glen property all week.

"He says he smells like a smoked bacon," joked one of his oldest friends this week, Annie Wright, however she added Thompson has been deeply concerned for the welfare of neighbours and the wider community around his acreage, where he has planted 23,000 trees – blackbutt, tallowwood and hoop pine.

While he is presently in good health, Thompson depends on a dialysis machine, which he also travels with, and has been "packed up and ready to go" for days. 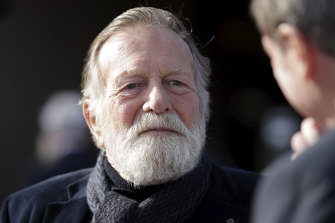 "He says the smoke has turned the sun and moon red, and the devastation is heart breaking for them but really there isn't much they can do but remain alert … it's a terrible tragedy for everyone," Wright said.

Over on Crowe's 400 hectare property at Nana Glen, about 25km north west of Coffs Harbour, the actor's bush idyll was ravaged by fires, though the actor, who is  overseas working, said his family were safe and had been "billetted" out. 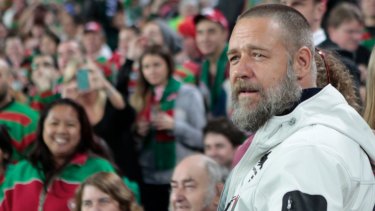 Scorched roof: Russell Crowe’s property at Nana Glen was in the line of fire.Credit:Quentin Jones

One of Crowe's neighbours, Debbie Waldon, had lashed out at the star during an interview with Channel 7 news on Tuesday, saying: “I’m angry because our friend’s house is there burning and all the trucks go to Russell Crowe’s. What about normal everyday people?”

The NSW RFS dismissed the neighbour’s accusation while the actor’s niece, Chelsea Crowe, who lives on the property, described the claim as “bulls–t”.

“Unfortunately, there is a lot of gossip & bulls–t media going around that fire crews abandoned properties in favour to protect Russell’s home," she posted on Facebook.

Crowe himself posted on Twitter: "“Lost a couple of buildings, but overall very lucky so far", though the actor did mention the roof of the chapel, which he had specially built for his lavish wedding to former wife Danielle Spencer in 2003, had been"scorched".

"Deepest thanks to everyone on the ground," he wrote. "Some fires still burning and we are out of water. No livestock deaths to date. Horses OK. Let the chickens out and they are back, warm worms for breakfast!” 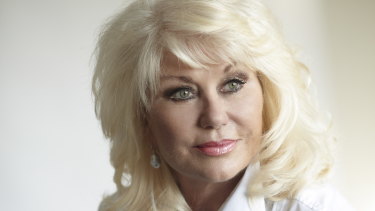 Di Morrissey has been providing refuge for frightened koalas.

Further south best-selling author Di Morrissey told PS she, along with most of her neighbours, were concerned about falling embers spreading from fires surrounding her forrest retreat.

But her most immediate worry was the community of koalas on the property.

"The loss of not only habitat but the animals devastates me," she told PS.

"We have a huge koala population in the area and a small community of them around us and in our garden. I have tied pots of water to all the trees. The poor things are scared as hell, one of them turned up this morning in a jacaranda tree by the bedroom. He has a tub of water on the tree behind him.

"I just wish the politicians would act and not accuse. We have a lot to learn from our indigenous elders."

Wait and watch for celebrities

Fires have also been threatening to derail one of Britain's biggest television shows with a horde of celebrities (well, to be honest PS had not heard of most of them) due to be dropped in the wilderness for the ITV show I'm A Celebrity Get Me Out Of Here tomorrow. 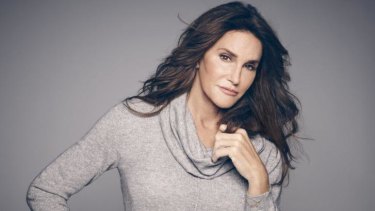 Caitlyn Jenner is about to go into the fire zone for Britain’s I’m A Celebrity Get Me Out Of Here.

The British version of the show is filmed in a disused banana plantation near Murwillumbah, not far from several of this week's fires.

Among the show's 2019 lineup is transgender woman Caitlyn Jenner, father of Kylie and Kendall Jenner and step-father of Kim, Chloe and  Kourtney Kardashian.

The closest fire to the camp where the show is filmed was just 10 kilometres away in Lamington National Park.

“We are in constant contact with the NSW fire brigade and are closely monitoring the situation,” a spokesperson for ITV said.

The show is one of the most popular in Britain, with millions of viewers tuning in each night to watch the mostly live-to-air broadcast.

“We currently have no cause for concern. The health and safety of all our production crew and celebrities are of the utmost importance,” the network statement said.

Jenner and her co-stars have been lapping up their last moments of luxury at the Palazzo Versace on the Gold Coast before being transported to the show's set, which is still scheduled to happen tomorrow.

His father and grandfather have been immortalised on the small screen, but James Packer says he "knows nothing" about a new play about his famous family which makes its debut on the stage of the Belvoir on Saturday. 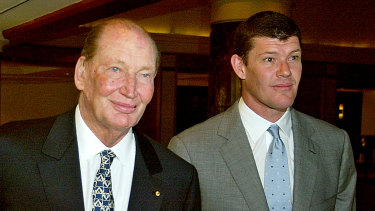 Called Packer & Sons, the play is by Tommy Murphy, who was also responsible for the excellent Mark Colvin’s Kidney and Holding the Man.

Directed by Belvoir's artistic director Eamon Flack, it is being billed as "a play about power and what it does to the men who wield it."

But when PS approached Packer this week about the new play, he admitted: "I know nothing about it".

Granted, he has probably been pre-occupied in recent months, with both his personal and business lives. He is not expected back in Sydney until his shining edifice at Barangaroo, the towering casino, is completed in around a year's time.

So what are we to expect from this new play?

According to the blurb from Belvoir, Murphy "writes real-life like no one else – complex dramatic portraits, a pitch-perfect sense of the public interest in the private life. In other words, no one is better suited to write about the Packer line."

As for the actual play it is "about power in Sydney, and fathers and sons across generations, and the childhood traumas that drive us forward".

"From humble beginnings, the myth of the Packer dynasty grows in step with their increasing influence, as each son feels the weight of time, of power. Newspapers, magazines, broadcast TV – what are they? How does each generation keep the empire one step ahead of the technological race, declare himself free of the shadow of his father and build a lasting legacy.''

Flack adds: “This is the story of patriarchy and the way power is passed from one man to another, and the cost of concentrating power in these men. It’s a historical story that has found its time in 2019 as big-man politics continues to assert itself on the national and international stage.”

John Gaden, who has been in Cloudstreet and The Wild Duck, plays an older Rupert as well as former media executive Nick Falloon.

Brandon McClelland takes on Clyde Packer and A Taste Of Honey's Josh McConville plays James Packer and a young Kerry.

While none of the Packer family is expected to be in the audience for tonight's opening, they have until December 22 to see it.

Unlike his great rival the showbiz impresario Harry M Miller, fellow media and sports agent John Fordham's was not a household name but rest assured he was involved in some of the most critical deals that have helped shape this city. 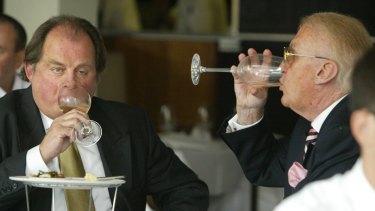 Indeed the calibre of his pall-bearers at Paddington's St Francis of Assisi on Friday was testament to that, with Mark Taylor, Ricky Stuart, Wally Lewis, Matt Burke and Mark Bouris among them.

Fordham, 75, lost his battle with throat cancer on Sunday, though he was still advising his son Nick Fordham on various deals just hours before his death.

"I think he was retired for about 12 hours," Fordham told PS of his father. "We were talking about a contract negotiation and he admitted the morphine was making him fuzzy in the head and that he was ready to quit …  just a few hours later he was gone."

John Fordham was the man who convinced Alan Jones to try his hand at talk-back radio and advised Mark Taylor to bow out graciously when he equalled the great batsman Sir Donald Bradman's 334-not-out in the second Test against Pakistan in Peshawar in 1998, rather than beat the 1930 record for most runs by an Australian. 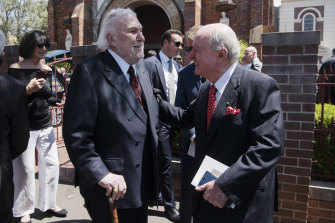 It was Fordham who flew to London to be by Jones' side following the infamous "London incident", when he was arrested in a public toilet and charged with "outraging public decency" and "committing an indecent act". The charges were later dropped when the prosecuting authorities were ultimately unprepared to present any evidence to support them.

It was Fordham who was at the centre of both the Cash For Comment and Super League controversies, determined to protect the interests of his clients. He famously put Tom Hughes, QC, in his place when the legal eagle questioned why his client John Laws was earning so much money from his on-air endorsements, to which Fordham suggested was "on par with elite athletes or even QCs".