A woman has vented her frustration at being frequently called ‘black’ by white people, despite the fact she’s mixed race.

Posting on Mumsnet, the woman, who has a white mother and black Brazilian father, explained that a friend asked about her views of racism in the UK ‘as a black person’.

She said it’s not the first time that people have assumed she’s fully black and she doesn’t have anything against the aspect of her heritage, but feels the identity is being ‘forced’ upon her.

Describing herself as having slightly darker skin than the Duchess of Sussex who is also bi-racial, the woman sparked a debate about assumptions associated with skin colour and identity. 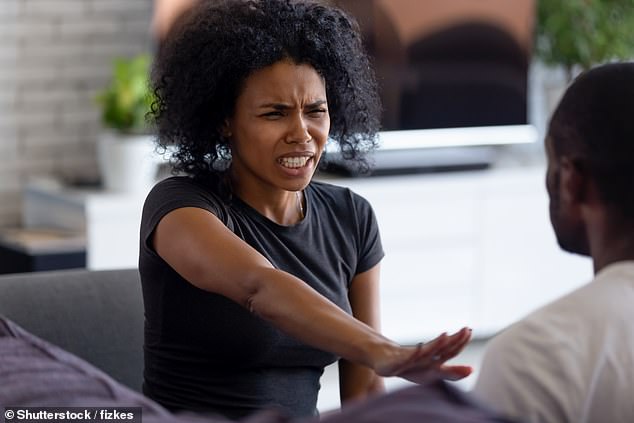 A British woman sparked a discussion about identity, after revealing she’s fed up of being referred to as black despite being mixed race (file image) 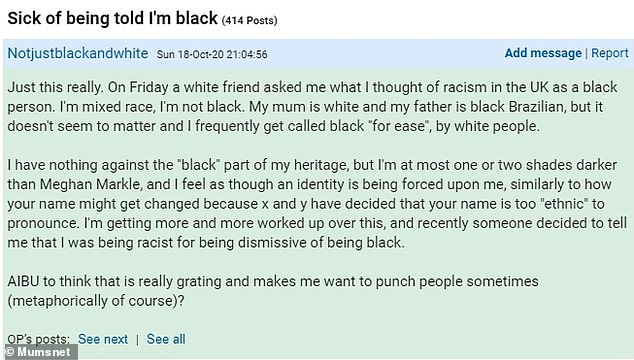 Posting on Mumsnet, the woman explained a white friend recently asked her to comment on racism in the UK from the perspective of a black person

Captioning her post ‘sick of being told I’m black’, she wrote: ‘Just this really. On Friday a white friend asked me what I thought of racism in the UK as a black person. I’m mixed race, I’m not black. My mum is white and my father is black Brazilian, but it doesn’t seem to matter and I frequently get called black “for ease”, by white people.’

‘I have nothing against the ‘”black” part of my heritage, but I’m at most one or two shades darker than Meghan Markle, and I feel as though an identity is being forced upon me, similarly to how your name might get changed because x and y have decided that your name is too “ethnic” to pronounce.

‘I’m getting more and more worked up over this, and recently someone decided to tell me that I was being racist for being dismissive of being black.

‘AIBU to think that is really grating and makes me want to punch people sometimes (metaphorically of course)?’

The post received a divided response as some agreed the individual should be given the freedom to choose how they identify.

Another said: ‘I would find that annoying as well. I don’t really understand why people refer to Meghan Markle as black either. Bonkers! I’m actually mixed race but no one would ever call me black.

‘I blame the tick boxy obsession with trying to put everyone in boxes and the generational periodic change in the way that people talk about people. We are all humans after all so should be able to think in shades.’

A third said: ‘I always thought the idea that mixed race people are black came from the “one drop” rule/theory in the US. I tend to find black people over white people default to calling mixed people, black.

‘As a mother of mixed children and mixed niece and nephew it would p*** me off as my daughters should be equally proud of both sides of their heritage. African on their dad’s side, white Jewish on mine, know both histories etc.’

Others argued some mixed race people identify as black and therefore they can’t understand why the woman is angry about the assumptions made about her.

‘Well YANBU and YABU. You’re obviously right – you are mixed and people shouldn’t just be seeing one side of anyone’s identity,’ one wrote.

‘However, I think many people who are mixed race – even to have one black grandparent and three white – consider themselves black, so you can see why they make that call.’

Another added: ‘The term “black” means someone with African heritage. You can be black and mixed race. However “white” describes fair skin and European ancestry. A half black person with brown skin is not viewed as white in Western society even if one parent is.

‘Honestly a lot of this always sounds like mixed race people who perceive blackness to be negative so make huge noise to distance themselves. I have many black and mixed race people in my family and no one has any issue owning all sides of their culture but also identifying as black.’