An early review of a $3.2 billion community grant program run by the previous government has found cash funnelled to projects without any organisation backing them, successful applicants not told they had won assistance and money given to projects identified only by their state.

Infrastructure Minister Catherine King has revealed in at least one case, a grant has gone to a company owned by a Cayman Island-based investment firm while money has also flowed to a private golf club that charges $1242 a year for membership. 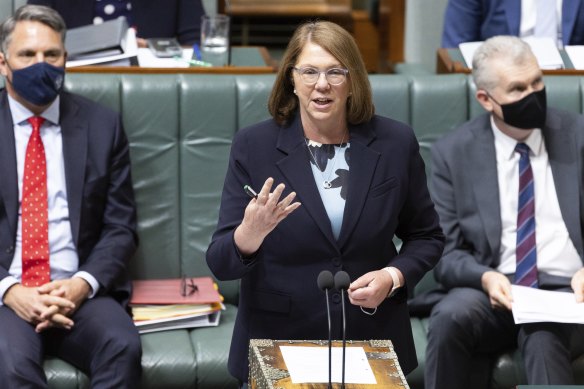 Infrastructure Minister Catherine King has signalled the budget will contain new rules around contentious grants programs in a bid to stamp out pork-barrelling.Credit:Alex Ellinghausen

The Community Development Grant program was one of 11 programs identified in a special investigation by The Sydney Morning Herald and The Age that heavily favoured either Coalition-held seats or marginal Labor electorates.

The program was created after the 2013 federal election by the government of then prime minister Tony Abbott to fund various promises it had made ahead of the poll.

It funds infrastructure that “promote stable, secure and viable local and regional economies” and acts as a closed, non-competitive grants fund. The prime minister of the day approves funding for projects before a value-for-money assessment is carried out by the public service.

At this year’s election, it was again used to promise hundreds of millions worth of projects.

King’s early examination of the fund has found in six cases, projects have won funding but there is no organisation requesting financial assistance.

In seven cases, successful applicants have not been sent an official letter saying they have won funding.

More than $18 million worth of projects have no fixed location, with paperwork showing only that it is destined for a state or territory.

A spokeswoman for King said the government was going through spending programs “line by line”, with changes to the allocation process likely to be revealed in next month’s budget.

“We want taxpayers’ money to go to projects that represent good value and benefit to communities, including in regional Australia,” she said.

“The upcoming budget will propose a range of changes to strengthen integrity and transparency of grants and to ensure they are fairer than they have been under the previous government.”

Some grants were included in the pre-election economic and fiscal outlook. Of those grants, half went to Victoria where the Coalition was facing strong competition from Labor and teal independents. Just 10 per cent of funding went to NSW while regional Australia received less than metropolitan areas.

A $25 million grant for a port development in South Australia will go to a company 70 per cent owned by an investment fund based in the Cayman Islands tax haven. In Queensland, a private golf club that charges a $1500 joining fee and then annual fees of $1242 will get $1.3 million towards a carpark extension.

Two grants, $600,000 for the Armidale Rams Rugby League Club and $3 million for the Guyra Early Learning Centre, were promised by then deputy prime minister Barnaby Joyce just days out from the May 21 election.

While the Coalition says these were commitments made by the government before the election was called, the Infrastructure Department has no record of the former government or former prime minister Scott Morrison actually approving them.

This week, the parliament’s joint House and Senate audit committee revealed it would look at six separate funds, worth a combined $7.2 billion, that critics have alleged were used to pork-barrel Coalition seats at the past three elections. It does not include the Community Development Grant program.

Finance Minister Katy Gallagher is expected to reveal the first results of her own audit of “waste and rorts” in the October 25 budget.