This is an enterprising stage adaptation of Danish author Janne Teller’s 2010 novel Nothing – a bleak YA fiction that pivots from the horrors of growing up to exploring stark questions of whether life and art mean anything at all. 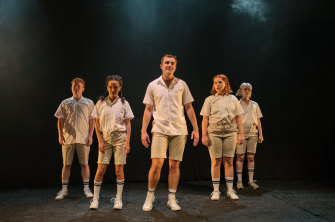 The cast of Nothing ponder the nature of existence.Credit:Cameron Grant

When seventh-grader Pierre Anthon declares “nothing matters” and walks coolly out of his classroom on the first day of school, he shocks his peers. The outsider takes to taunting a group of his classmates from atop a plum tree, where he continues to deny that life has meaning.

If the boy’s existentialist mantras are difficult for children to refute, they’re also backed by glib arguments that waver between enlightened philosophy and abject nihilism.

Stung, a group of fellow students take up arms against him: first throwing stones at him, and then hatching a plan to prove him wrong.

Surely, something must matter, but how to show it? The group decides to assemble a cache of meaningful things, each teenager sacrificing something precious to the pile.

And what starts innocently enough – Dungeons & Dragons books, bikes, favourite shoes – becomes more disturbing, as slaughtered pets, sacred religious objects, the corpse of a child, a severed finger and a girl’s virginity are added to the collection.

Law enforcement gets involved. The media goes wild. In a sudden twist, their macabre assemblage is bought for millions by a prestigious US art museum. Will such recognition be enough to convince Pierre Anthon of the meaning of their endeavours? Or must one last treasure be sacrificed?

Fleur Murphy leans (perhaps a touch too heavily) on choric ensemble acting to capture the flavour of this existential gothic tale.

Through committed physical theatre and often in vocal unison, the five young actors – Connor James, Rebecca Makar, Jessica Marton, Eddie Pattison and Laurence Young – transform into a teenage hydra, giving vigorous embodiment to the menace of peer pressure and the abdication of responsibility that can grip those under its spell.

Less intensely rendered are the character’s individual psychological arcs, partly because they’re underdrawn, though you get a sense of histrionic inexperience, too.

Leaving aside the mood-breaking use of pop songs, the design is superior, with set, lighting and stage effects conveying a dark Scandinavian atmosphere as well as the apocalyptic weight of impending adulthood.

A more experienced cast and some fine-tuning might be necessary, but it’s an adaptation with main stage potential.