Mother, 30, who was diagnosed with PTSD and ‘wanted to burn the house’ following a traumatic C-section has praised gardening for improving her mental health

A mother who was diagnosed with post-traumatic stress disorder after suffering night terrors and suicidal thoughts following a traumatic C-section has revealed that gardening has helped to restore her mental health.

Self-employed Kirsty Ward, 30, from Lincoln, told how she struggled with the pregnancy of her second daughter Mila, three, after her pelvis started coming out of line, meaning she had trouble walking.

She went into premature labour at 27 weeks – but luckily the baby was held off for weeks thanks to an injection of steroids.

However, a traumatic 12-hour labour and C-section at hospital followed, which caused her to loose a large amount of blood and suffer two womb infections.

At first, Kirsty, who also has daughter Callie, five, tried to paper over the emotional cracks, but one Sunday morning, when her husband Jason, 32, was due to fly to Russia for work, it all got too much.

‘I was upstairs on the top floor of my daughter’s bed,’ she explained. ‘I was crying. Like sobbing.’

‘And when he asked me what was wrong I said I didn’t want him to go. I told him I thought that when he left, me or the children were going to die. 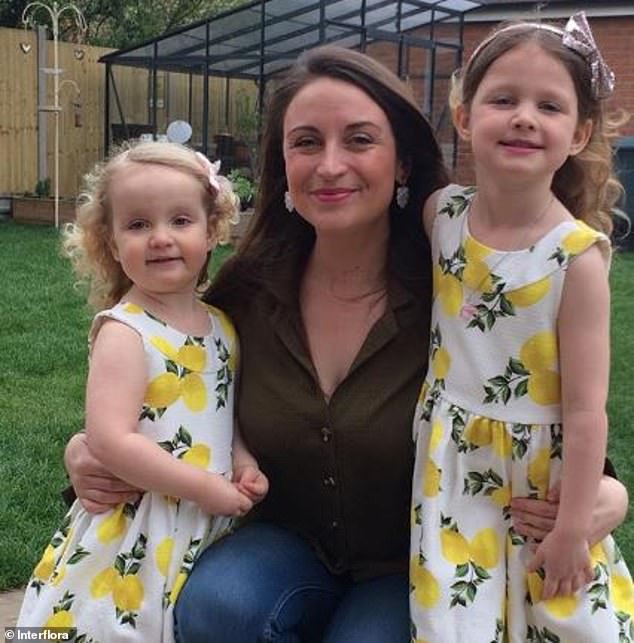 Kirsty Ward, 30, from the UK, was diagnosed with post-traumatic stress disorder after suffering night terrors, panic attacks and suicidal thoughts following a C-section when giving birth to her second daughter Mila. Pictured, both together  in the garden in Lincoln alongside her eldest daughter, Callie 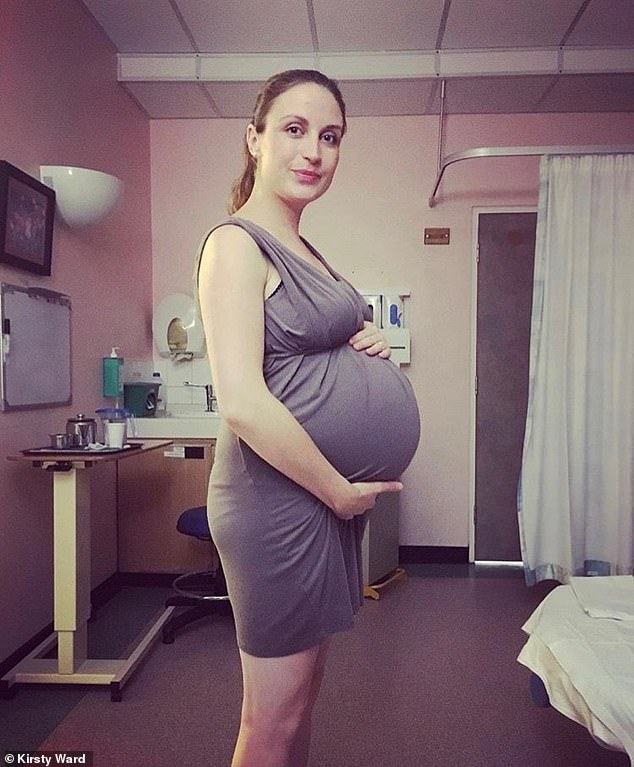 While pregnant with Mila, pictured near the end of her pregnancy in 2016, Kirsty’s pelvis started coming out of line, giving her trouble walking – and she went into premature labour at 27 weeks 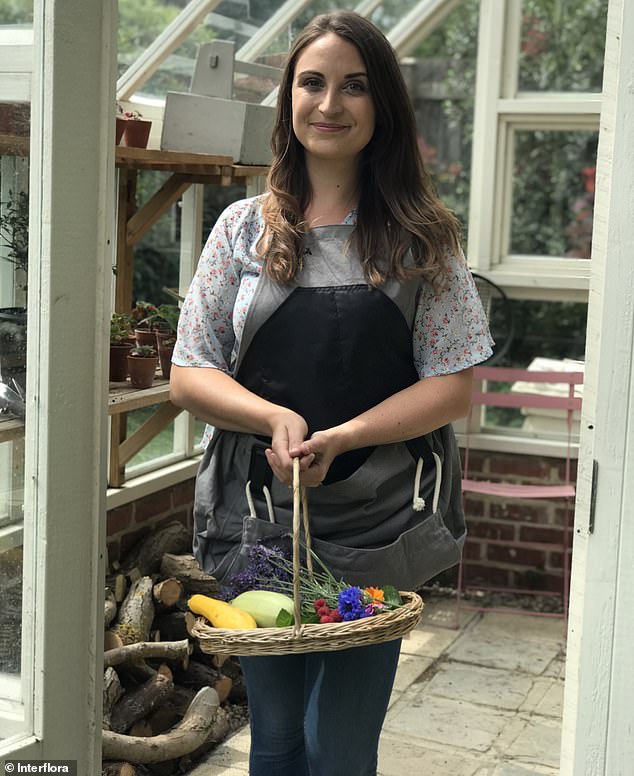 After her diagnosis, Kirsty took up gardening to help improve her mental health and hasn’t looked back since. Pictured in her allotment in Lincoln. She now runs an Instagram account called @my_little_allotment

For most of Kirsty’s traumatic pregnancy, which included a scare that it was ectopic, and bouts of severe dehydration, Jason had been abroad working as a commissioning engineer.

But following the birth, Kirsty struggled with the emotional side and as a result told how she stopped eating and drinking for two weeks, lost three quarters of a stone, and became bed ridden.

‘I was waking up in the night screaming,’ she explained. ‘I spent two weeks in bed. I couldn’t keep anything down. I was waking up sweating, shouting and then I’d have a panic attack. And that would last anywhere between 10 and 30 minutes.

‘And by the time one would have started and finished – I would then have another. Then I started having quite awful visions. I wanted to just burn the house down while we were all inside because I thought that would be easier.’ 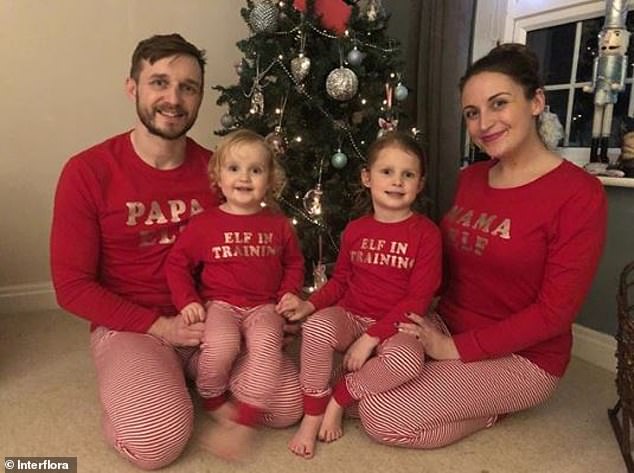 Kirsty’s husband Jason, 32, pictured with the family at Christmas, realised something was wrong after his wife left the breakfast table without speaking to him the morning he was planning to fly to Russia for work 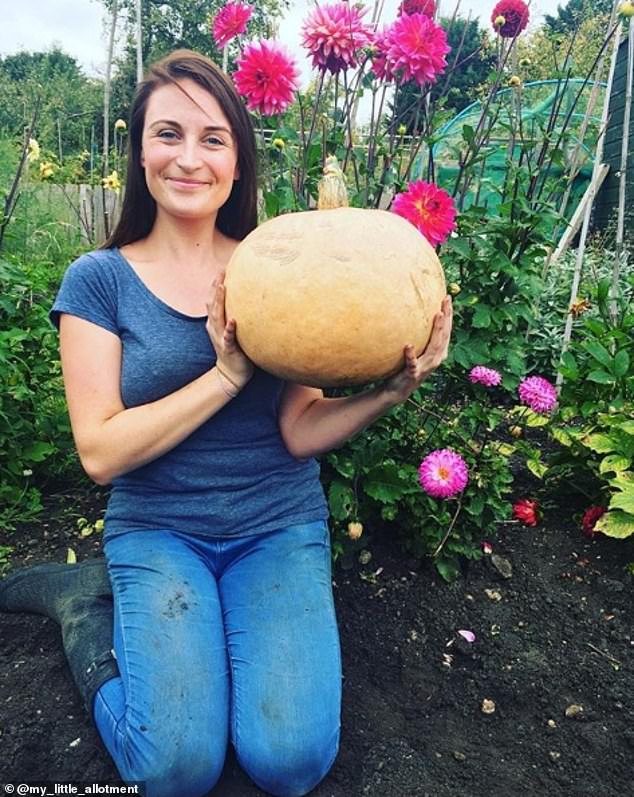 After going to therapy, Kirsty discovered gardening and, following advice from her husband, applied for an allotment. Pictured, holding up a giant squash grown on her allotment

Kirsty had also struggled with the forceps delivery of her first daughter Callie, now aged five, but didn’t tell anyone.

‘I felt quite overwhelmed being a new parent and felt like everything had to be perfect – the house, everything I did with her, what she was wearing,’ she explained.

‘I couldn’t go out and about with her in case she would cry and be upset.’

But when she finally broke down to Jason about how she was feeling following the second birth, he rushed her to the doctors and cancelled his trip to Russia.

KIrsty claimed the emergency clinician on hand was ‘very dismissive’ and said she was just suffering from ‘a bit of postnatal blues’. 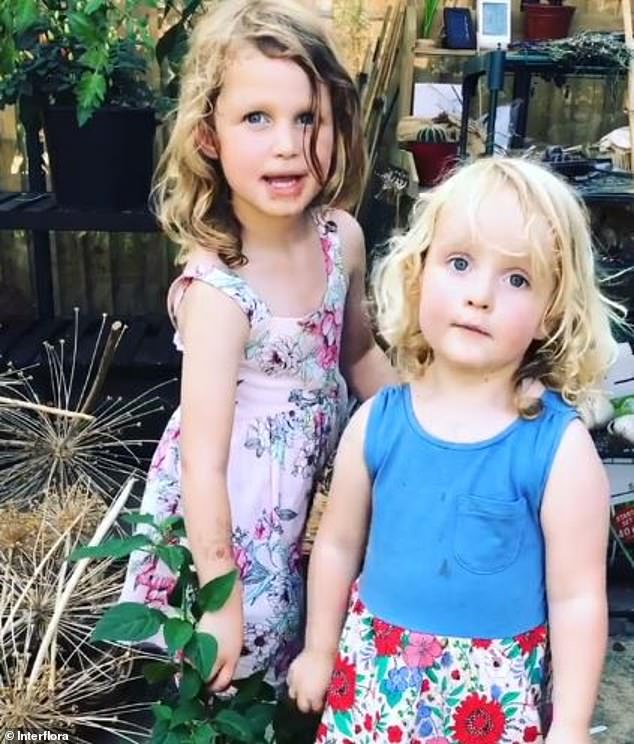 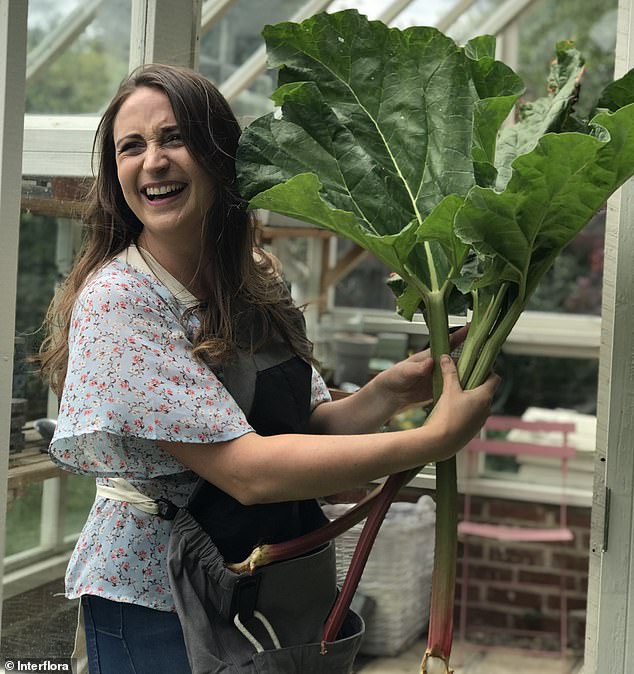 After having her breakdown six months after the birth of Mila, Kirsty, pictured here holding some rhubarb, said she was bedridden for two weeks and couldn’t eat or drink

But the next day at an emergency appointment with her GP, Kirsty was booked in to see a behavioural therapist.

She was also given pills to take while she waited, but was warned that these would make her feel worse before she got better.

‘I can remember thinking the only time I’ve ever heard PTSD is for people that have been in the war,’ she said. ‘I just really couldn’t understand what was going on.’

‘I had cognitive behavioural therapy for six to eight weeks and I started taking the tablets. It helped me get back on my feet but I felt knackered completely.

‘I was just a really empty and emotionless shell. This is where the allotment comes in.’ 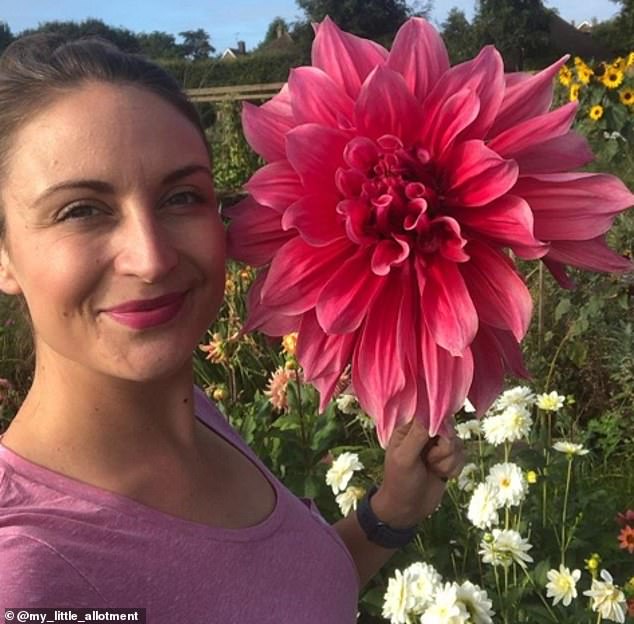 The mother-of-two said Dahlias, pictured, are her favourite flowers because they bloom in such brilliant colours 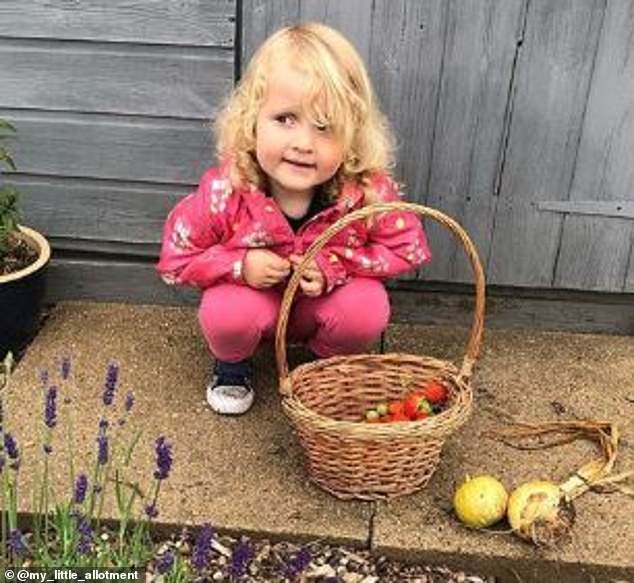 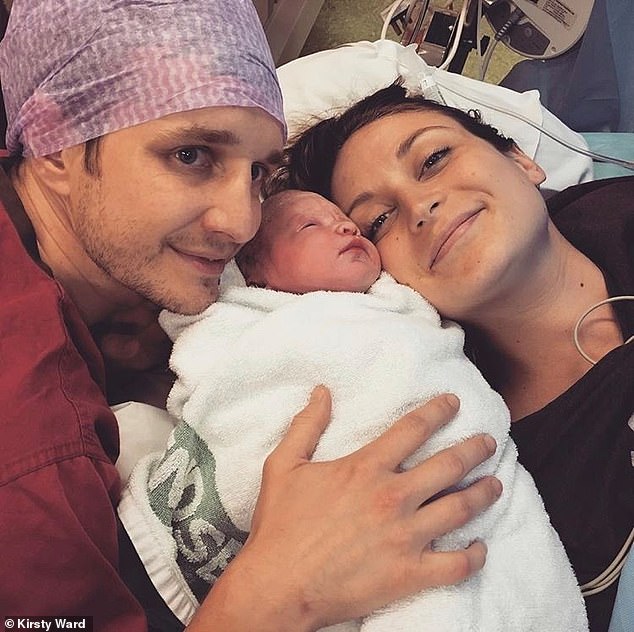 Kirsty, pictured with Mila and husband Jason after the C-section birth, said she lost a lot of blood following the procedure and suffered from two womb infections 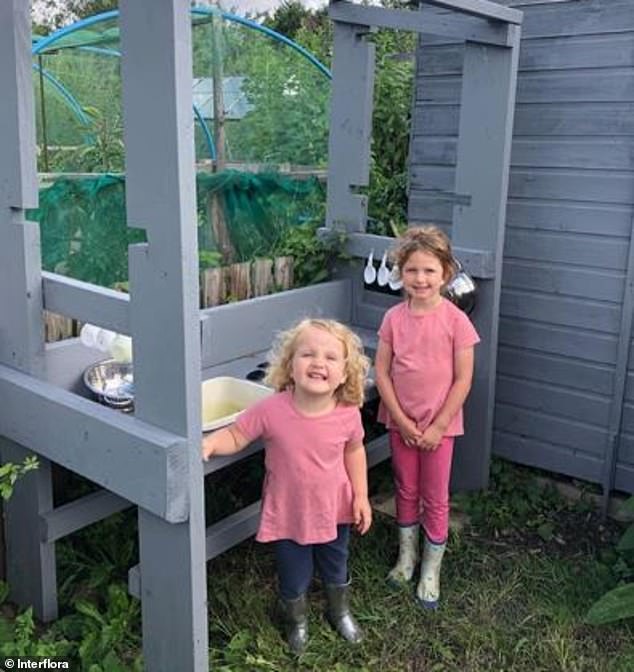 Kirsty said the allotment, pictured here with her two daughters, has been a real lifeline for her and that it has completely transformed her life

She initially got the idea to start tending plants online and it was only when her husband suggested getting an allotment that she decided to go through with the idea.

‘I didn’t have any idea about growing your own’, she explained. ‘The first thing that I ever planted was Gladioli bulbs as they’re flowers that I really like and actually, I planted them upside down!’

Soon, Kirsty’s mental health began to improve and she finally had something that she loved and wanted to talk about.

‘I think that was actually the first time I started thinking forward,’ she said. ‘I was thinking about what I wanted to do over the next few months’.

What are the best plants for improving your mental health?

As part of their campaign, experts at Interflora have named plants that can help improve your mental health and well-being by cleaning the air, even at night, keeping the house cool or just giving you a comforting bit of greenery in a place you wouldn’t normally find it. 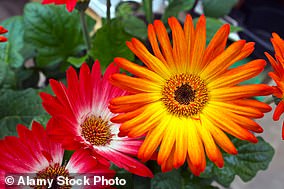 Experts at Interfloral labelled the Boston Fern as being one of the best to keep the air in your home clean, as it was reported to be ninth in NASA’s top 50 air-purifying plants.

It is also especially good at clearing the air of formaldehyde, which is found in household products.

Similarly the Spider Plant was also named as a great one for the house becaues it filters carbon monoxide, formaldebyde and xylene from the air.

And plant Gerbera could also help keep the air clean because at night its flower keeps discharging oxygen and absorbs carbon dioxide and other toxins.

Best plant for a bathroom environment 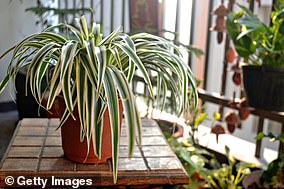 Peacy Lily was named by Interflora experts as being best for a bathroom environment as it likes lots of moisture and helps to filter ammonia, benzene, formaldehyde and other substances from the air

Plant to keep the house cool

For the summer months, Interflora’s experts said it may be a good idea to get Sansieveria, or the snake plant, as it has been proven to keep air temperatures low.

It also emits oxygen during the night and filters the air, making it great for bedrooms.

‘Over the course of a few months, I didn’t really see it, but it completely changed my life. I don’t think I would be here without it.’

Kirsty is now completely invested in her green-fingered hobby – and even took her phone on the family’s first ever holiday to Malta so that she could keep posting updates.

‘Last year I grew a large pumpkin and called him “big mac” – and I joked about it so much on Instagram,’ she explained.

‘There’s loads of pictures of me having tea with this pumpkin. And every time I think about it, it makes me smile.

‘It’s so important to sow a seed, nurture it, and watch it grow. And it’s just that little bit of love and attention that will help it bloom. 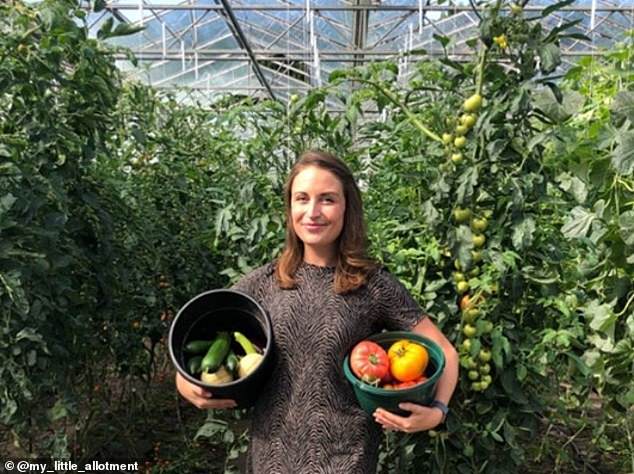 Speaking of her favourite flower, she continued: ‘I think it’s such a good reflection on yourself and your own mental health to watch it – so for me – dahlias just have to be my favourite flowers. My god they are amazing.’

‘I grow garlic and herbs over the winter to get those nice green shoots when things are a bit more miserable. Winter is a hard time of year, especially for people with mental health problems.’

Now, seven months on, Kirsty is off her tablets and enjoying life with her precious family.

‘Whether you seek help through a doctor, a friend or a family member, help is always there,’ she said. ‘If you are suffering after having a child you need to talk to somebody and get help.

‘You can still suffer with mental health problems and be a good mom’, she said before bursting into tears.

‘If I had been more honest and got help after my first daughter maybe I wouldn’t have suffered so much after my second, but I didn’t. I tried to act like nothing had happened.’

Interflora partnered with Kirsty for its #Mindfloral campaign which encourages people to get into the garden to improve their well-being. 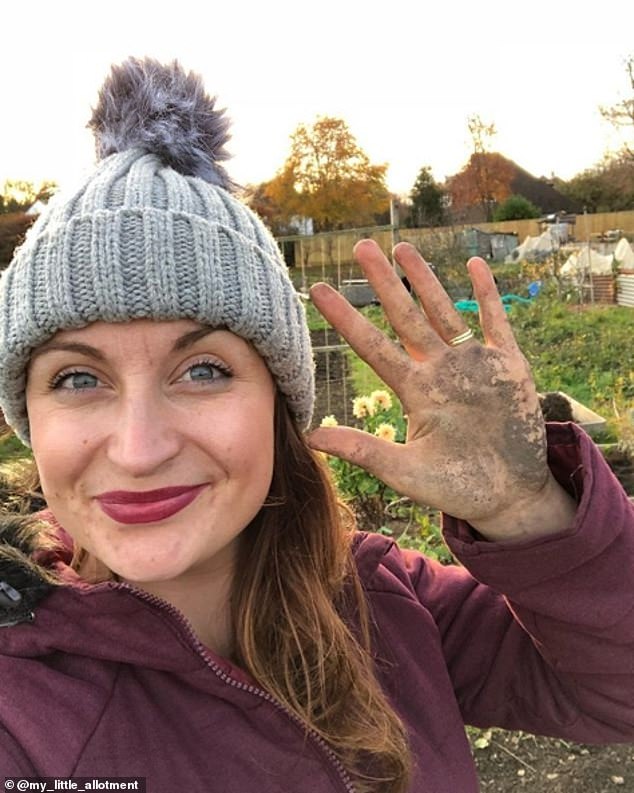 Giving advice for other women in the same situation, Kirsty, pictured showing off her muddy hand after a hard day’s work on the allotment, said that you should talk to someone as there is always someone willing to listen 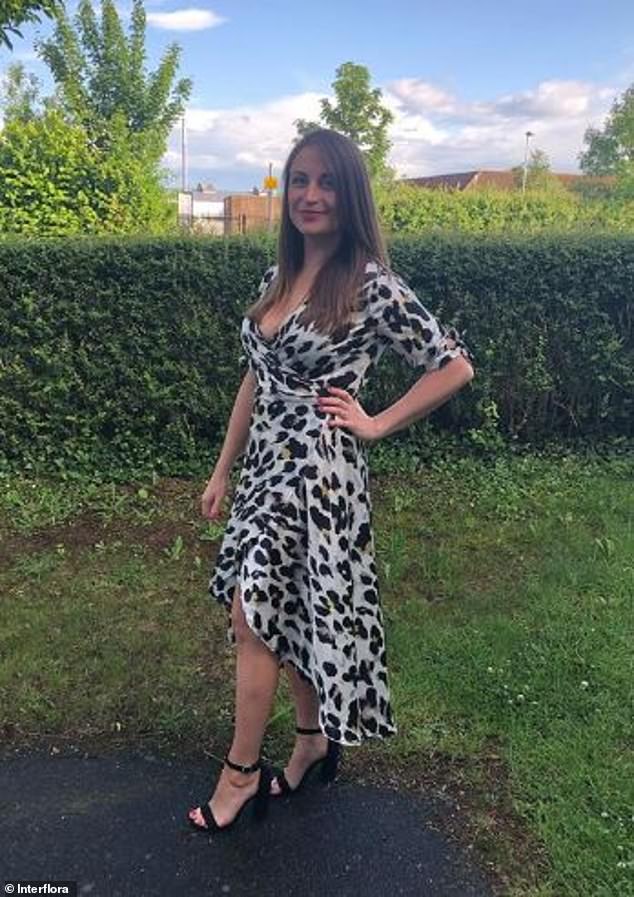 Kirsty, pictured at home in Lincoln, added that any woman can suffer from mental health problems and still be a good mother