A mother has shared her chance encounter after finding the daughter she placed for adoption 17 years ago standing right behind her.

Gina Crotts, 38, from Saratoga Springs, Utah, couldn’t believe her eyes when she turned around to see Kalyn mere feet away staring at her through a dance studio window.

She made the brave decision at the age of 19 to place her baby for adoption knowing she was single, living away from home and unable to raise a child.

Every year Kalyn’s adopted family would send Gina pictures and an update on how her life was going, which ‘settled her heart’ but she never stopped thinking about her daughter.

Gina would go onto have three other children with husband Brandon, 46,- JD 16, Evie 13, and Jett 8, and telling them all about their other sister, and even celebrating her birthdays with cake, candles and singing.

She never knew if her Kalyn, now 18, would want to connect with her, but fate brought them together while she was watching daughter Evie at a dance rehearsal that Kalyn happened to walk past. 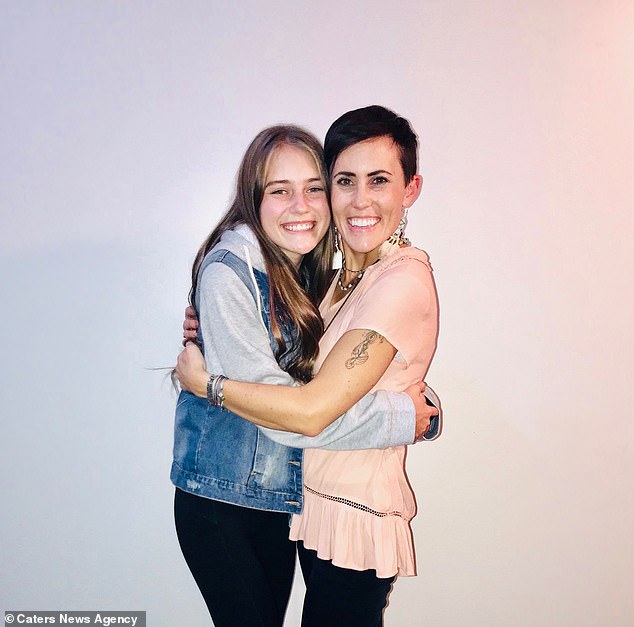 Gina Crotts, 38, from Utah, was reunited with Kalyn, 18, seen left, who she gave up for adoption 17 years earlier when she spotted her at the same dance studio she was attending a ballet class at 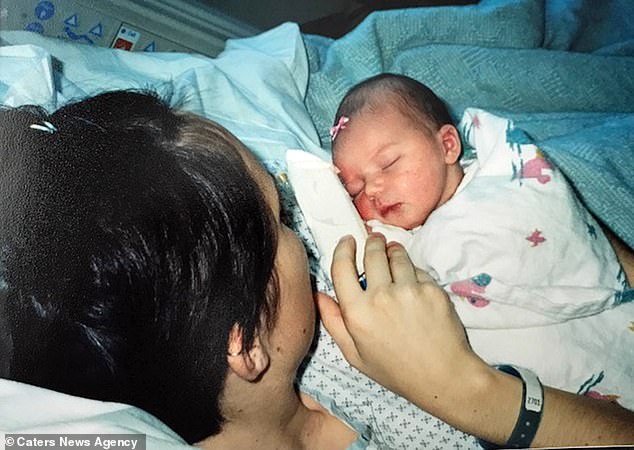 Gina, seen with Kalyn as a baby, made the brave decision at the age of 19 to place her baby for adoption knowing she was single, living away from home and unable to raise a child

During the class Evie suddenly pointed out a teenager in the crowd outside, who she believed to be her sister, and in disbelief the mum locked eyes with the young woman she last saw 17 years ago.

Gina, who is writing a memoir about her experiences, said: ‘I was sitting with my back to the window, I turned back and that single wall and six feet, was all that was between us.

‘I was shocked at first, then a second later full of sheer excitement, then hesitation in case she didn’t want to see me. 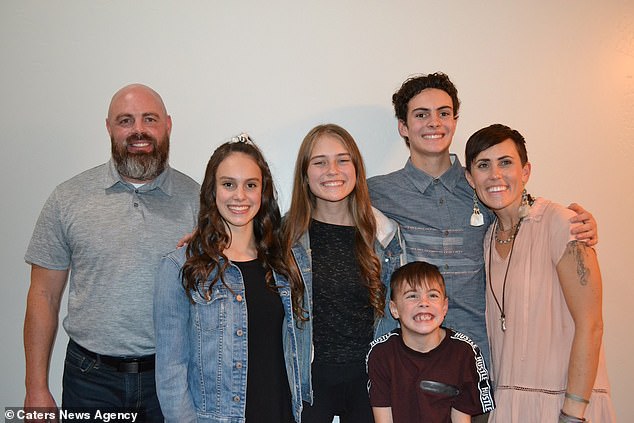 Pictured left to right: Gina’s husband Brandon 46, Evie 13, Kalyn 18, JD 16, Gina, and in front Jett 8. Kalyn met the family at the end of last year following the chance encounter at the dance studio

‘I stopped at the door, I didn’t want to walk out and see her walking away because she wasn’t ready. When I opened the door, she was standing in front of me.

‘The first thing I asked her was, ‘Are you happy?’ she said ‘Yes’ and we were hugging, I had to pull away because I wanted to look at her.

‘We couldn’t help but stare at each other, as we talked for longer, we would just look at each other and laugh.

‘It really is wild to think about the odds and was such a great moment for me, I feel very fortunate.

Since the chance encounter in October 2017 the pair have been texting, with Kalyn visiting Gina three months ago to meet her biological mum’s family.

Gina added: ‘My daughter always kept a picture of her sister in her room, so if anyone was to pick her out it would be Evie.’

After realising she was pregnant aged just 19, Gina knew early-on that she couldn’t have an abortion and decided to go down the adoption route.

Sifting through files about different couples looking for a child, she selected a family who were due to give birth to a baby boy six weeks after her, believing the pair could be raised as twins.

Gina said: ‘It was really hard the whole pregnancy leading up to that one moment of delivery that’s supposed to be joyous, bringing life into the world.

‘It was a mix of grief and happiness but knowing what was coming after, a lot of heartache.’ 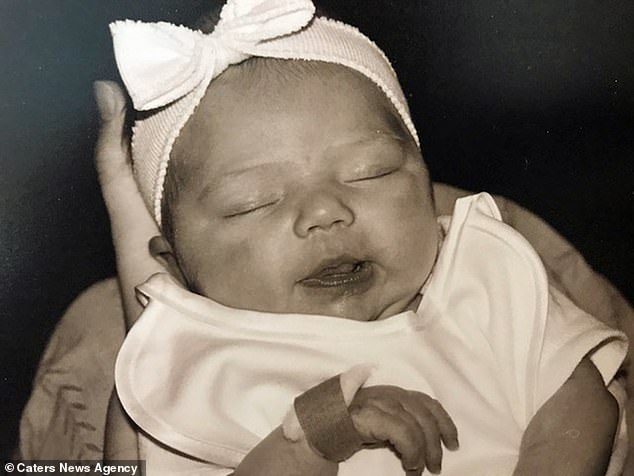 Pictured: Gina with little Kalyn who she knew she could not raise so she placed her with a new family – she knew her as her little butterfly 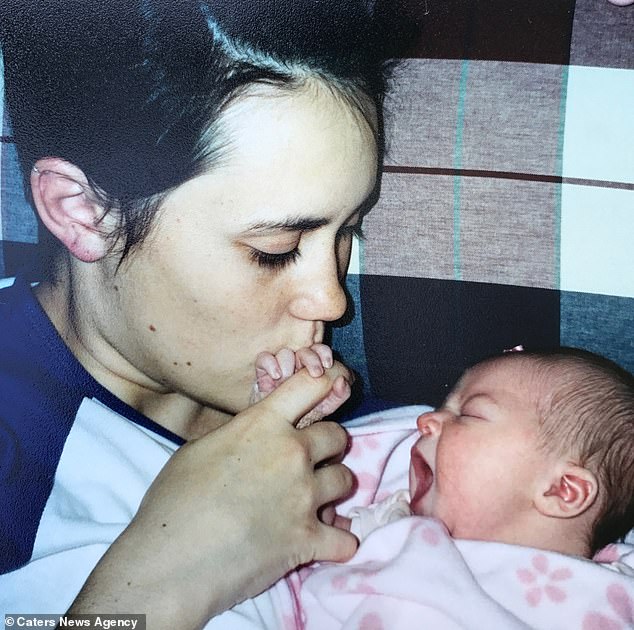 Pictured: Gina at home with little Kalyn who she knew she could not raise so she placed her with a new family 17 years ago

Gina quickly penned a poem for her daughter, ‘My little butterfly’ a symbol she would associate with her daughter and think of her whenever she saw one freely flying in the wind.

Kalyn’s adopted family kept in touch and sent updates several times a year until the age of five, then downsizing to once a year on her birthday.

While her daughter was not physically present in Gina’s life, she would tell her other children about their sister and showed them pictures of her.

Each year on her birthday, the family would gather around with a cake, candles and sing to keep her a living part of their lives.

After their unusual encounter in October 2017 Kalyn and her birth mother exchanged phone numbers. 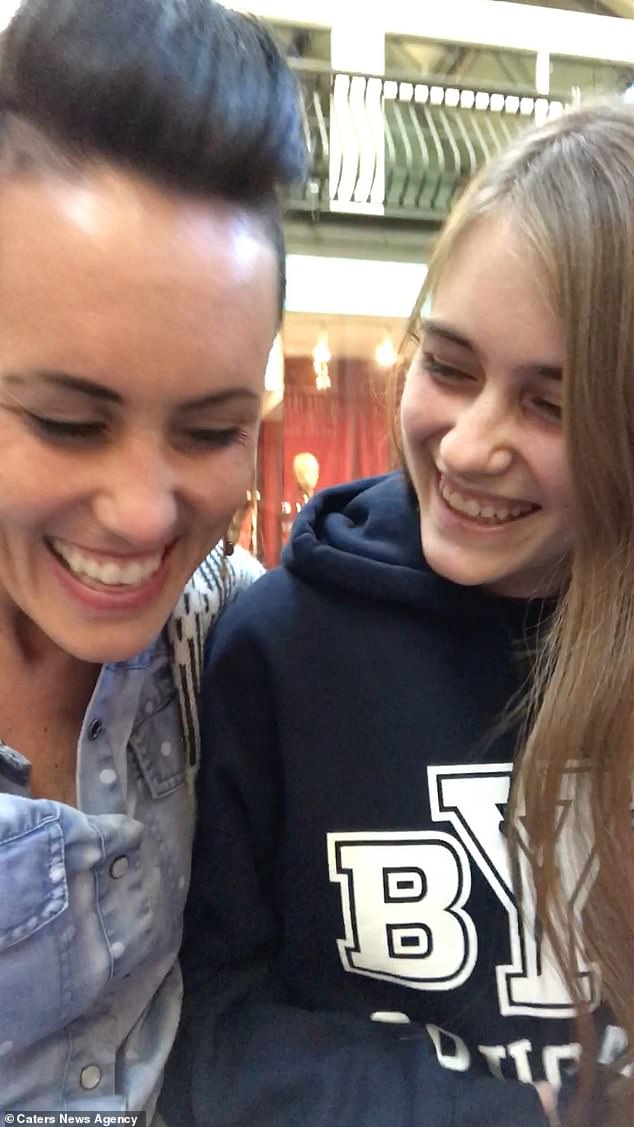 Pictured: A grab from the video of Gina and Kalyn on the day they met last year they have got closer ever since 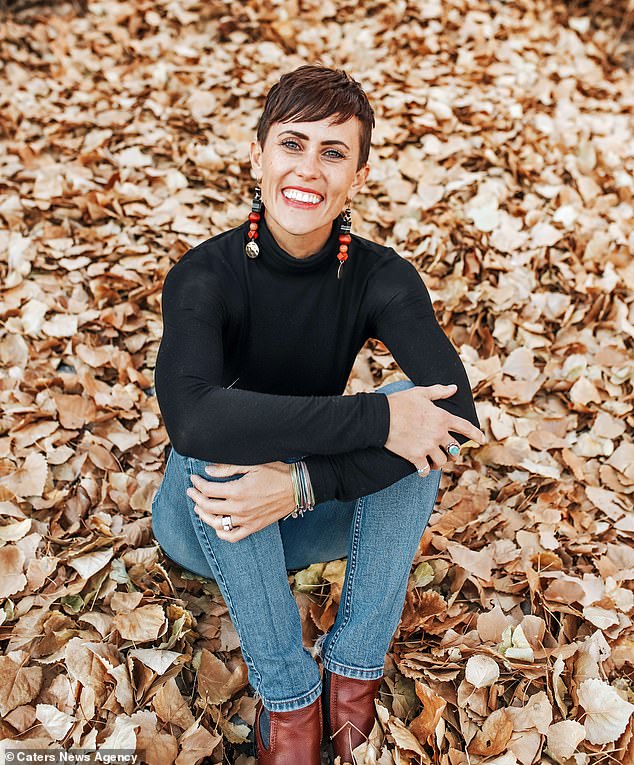 Pictured: Gina is happier than ever after being reunited with her daughter and plans to share her story and intends to write a memoir about the experience

Since then, they have bonded over text leading up to her visiting three months ago, just before Thanksgiving.

‘Placing her for adoption didn’t mean I forgot about her but pushed me to be a better person, I wanted to be someone she would be proud to meet some day.’

For Kalyn meting her biological family has been a positive experience so far and she is looking forward to building stronger relationships with the family in the future.

Kalyn, a senior in high school, said: ‘When I first met everyone, walking into the door I felt wrapped in so much love.

‘Here were all these people who had been loving me for 18 years, and I was just meeting them. 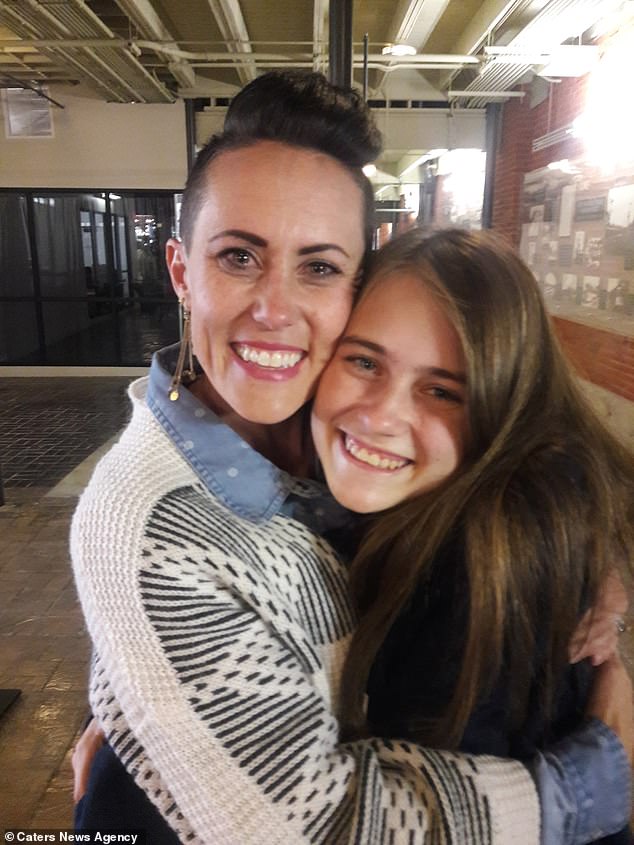 Pictured: Gina and Kalyn on the day they met in October 2017- the pair have since started texting and keep in regular contact 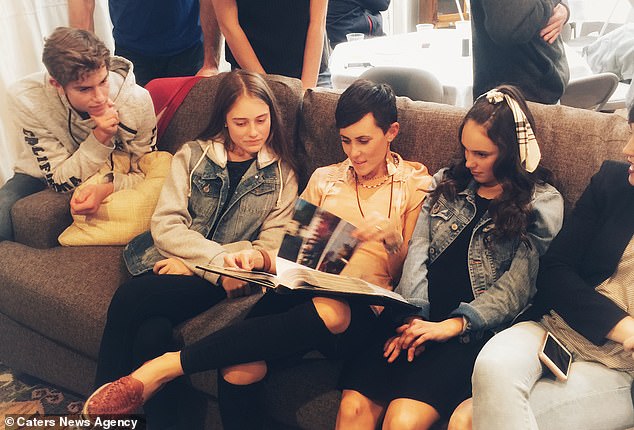 Left to right: JD, 16, Kalyn 18, Gina, Evie 13, looking at pictures after meeting each other 17 years after Kalyn was adopted

‘It was like opening a door to a whole other part of my life I hadn’t previously explored.’

Kalyn grew-up knowing about ‘Angel Gina’, keeping a binder of letters from the family and a framed picture of her mum, but always longing to meet her.

Training in ballet during her younger years, she was drawn to a window where she could see dancers performing, she recalls wanting a girl obstructing her view to move out the way.

Little did she know that was her biological half-sister chatting to her birth-mother, who she would meet moments later.

Speaking about the encounter, Kalyn said: ‘Running into her was one of the best ways to meet for the first time, as I didn’t have to worry about the anticipation and nerves.

‘It was way easier than I thought to talk to her, and upon meeting her I knew that we would always have a relationship from this day forward.

‘Getting to know my birth mother has been a really good experience. We get to text a lot and so whenever something exciting happens I get to tell her.’ 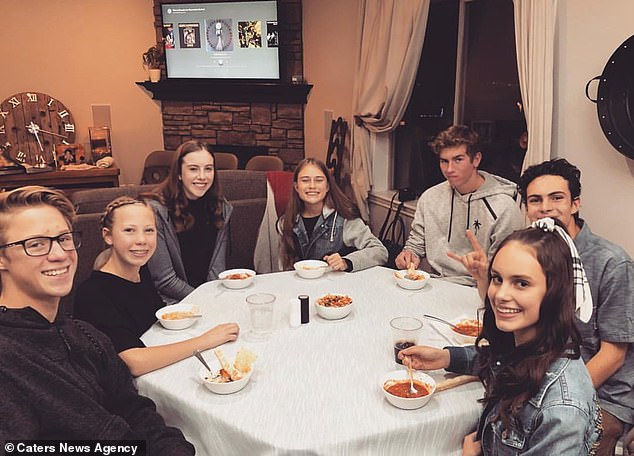 Pictured: Evie 13, Kalyn 18, JD 16, Gina, and in front Jett 8 join the extended family for a Thanksgiving dinner after meeting for the first time