Wheelchair-bound mother, 46, plans to splash out £550 on Christmas gifts for her nine realistic DOLLS – and they already have a £4K wardrobe

A mother-of-one who says her realistic baby dolls gave her back her life has spent more than £550 buying them Christmas gifts.

Bev Roberts, 46, from Liverpool, started suffering from anxiety and panic attacks ten years ago after she began using a wheelchair, and felt unable to leave the house.

Now she takes one of her dolls with her whenever she leaves the house as they give her the confidence, and attributes them with ‘fixing’ her mental health issues.

Bev bought her first reborn doll, Chloe, for £250 at a stall run by Lisa Trapasso-Emina in Liverpool’s St John’s Market. 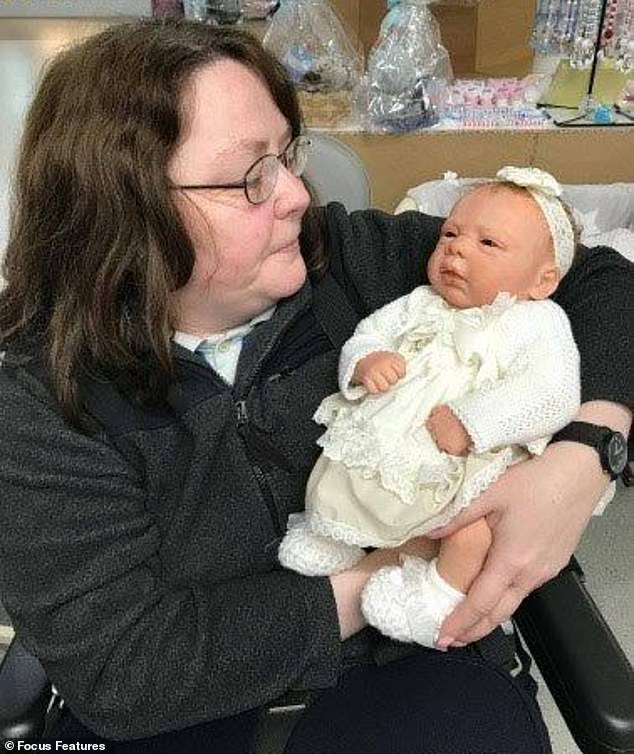 Bev Roberts, 46, has nine realistic baby dolls. She takes them everywhere with her and says they give her the confidence to leave the house 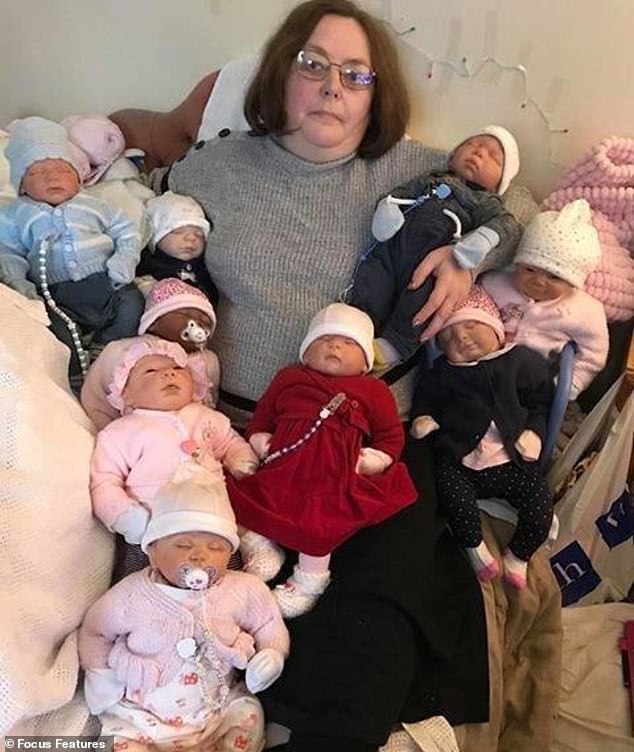 So far, she has spent more than £4,000 on the dolls and their clothes and accessories. She plans to spend more than £550 on them this Christmas alone 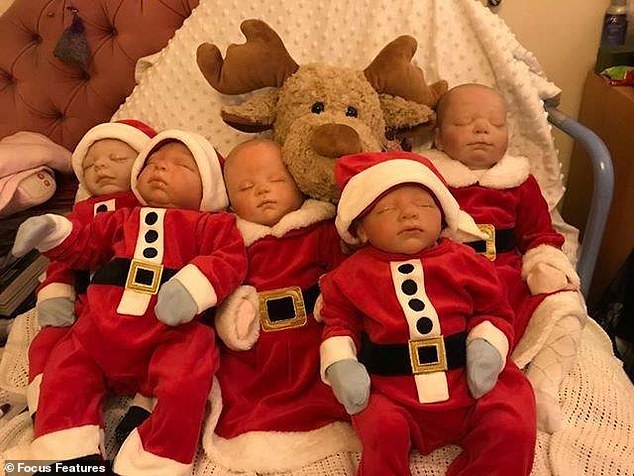 She plans to spend Christmas watching films such as Home Alone, Elf, and Santa Clause with her nine babies around her

She said: ‘Lisa was really patient and kind towards me and she helped me take my time to find the doll that suited me the best.

‘The moment I held her, she was just like a real baby. I had a feeling of security and warmth, she made me feel totally at peace.

This Christmas Bev has splashed out £565 buying clothes for her dolls.

She spent £50 on new clothes for her first eight dolls, then almost £100 on her newest doll as she has less outfits than the others.

The mother-of-one also paid £65 for decorations for their cots and chairs.

Over Christmas, Bev plans to watch festive films and spend time at home with her dolls.

She said: ‘I like nothing more than snuggling up on the sofa, with my nine babies around me.

‘We will watch Home Alone, Elf and Santa Claus the movie. We love all the Christmas films, and it’s so special to watch them with my family around me.’

‘And from there, it was all about her, not me. I wanted to take her out and show her off. Through her, I very slowly began to conquer my fear of going outside.’

This festive season she has splashed out on Christmas clothes for each of her dolls and even bought decorations for their cots and chairs.

Bev added: ‘My reborn babies are definitely better dressed than me. I adore buying them clothes, especially little Santa outfits.

‘For years I never enjoyed Christmas because of my anxiety. Now, I have my life back and I will celebrate every minute of the festive season – thanks to my dolls.’

Bev, who lives with husband, Bill, 71, suffers from fibromyalgia and her ankle joints have been fused.

After she began using a wheelchair she relied on Bill to cope, describing hospital appointments as a ‘huge ordeal’.

Buying a reborn doll for therapeutic reasons never crossed her mind – she bought the doll initially because they looked cuddly.

She said: ‘I didn’t for a minute think they would be therapeutic, I just wanted one because they looked cuddly.

‘I’d had a big argument with my own daughter, who’s grown up, and I think, deep down, I was feeling maternal.’ 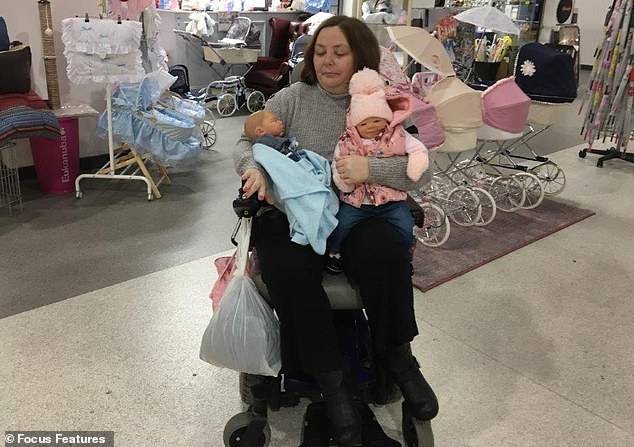 Bev suffers from fibromyalgia and her ankle joints have been fused. Ten years ago, she began using a wheelchair and her panic attacks and anxiety became so bad that she couldn’t leave the house 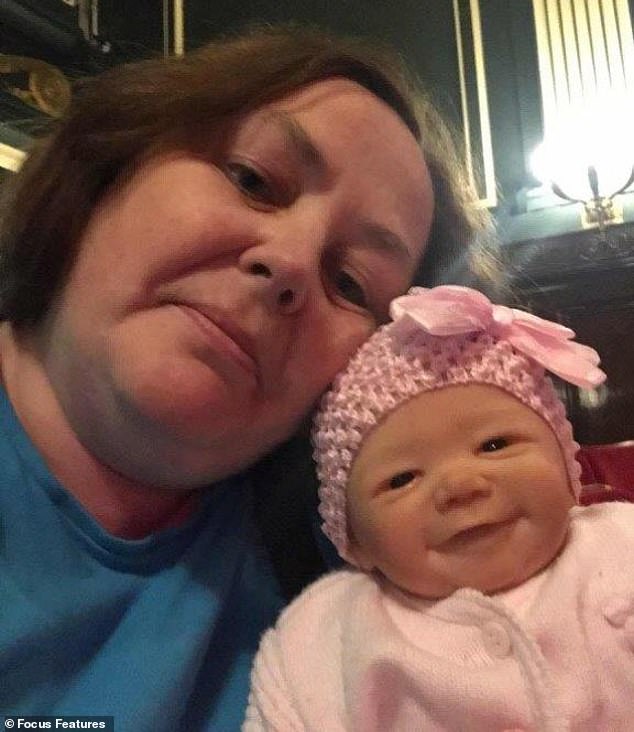 She says her babies have given her back her life as they give her the confidence to leave the house. Bev said: ‘I can now leave the house, each day, without even worrying. As long as I have a baby in a sling, or in a pram, I feel confident and I feel safe’

Over the past year, Bev has added to her collection with Ryan, Angelo, Corey, Pennie-Sui, Lydia, Lucy-Mai, Rochelle and her latest addition – Navaya-Rose.

Bev said: ‘It is a lot of money for someone like me, I am in a wheelchair, I can’t work, and I don’t have a lot of cash. But to me, my babies are the most important thing in the world.

‘They have given me back my life. I no longer suffer with anxiety or panic. I really feel as though they have cured me.

‘I can now leave the house, each day, without even worrying. As long as I have a baby in a sling, or in a pram, I feel confident and I feel safe. 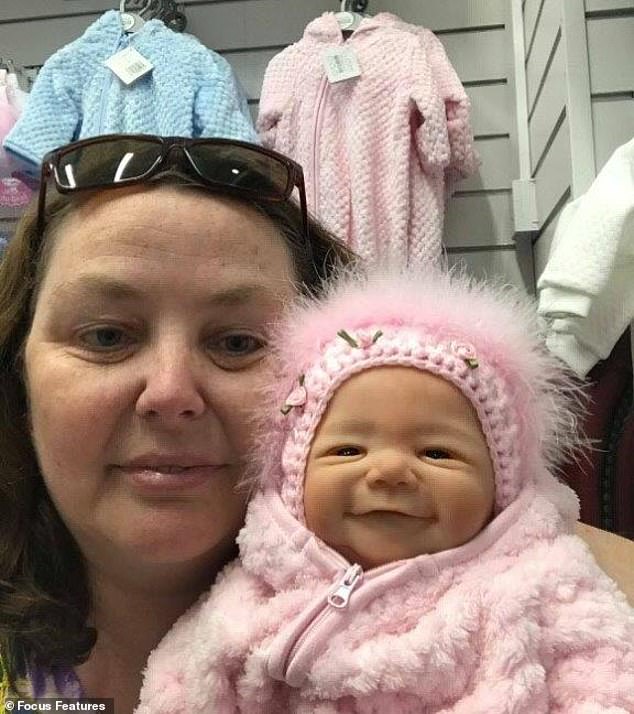 As well as buying her dolls clothes, she has bought prams, slings, Moses baskets, baby bouncer seats, baby clothes, dummies and toys. She added: ‘It is a lot of money for someone like me, I am in a wheelchair, I can’t work, and I don’t have a lot of cash. But to me, my babies are the most important thing in the world’ 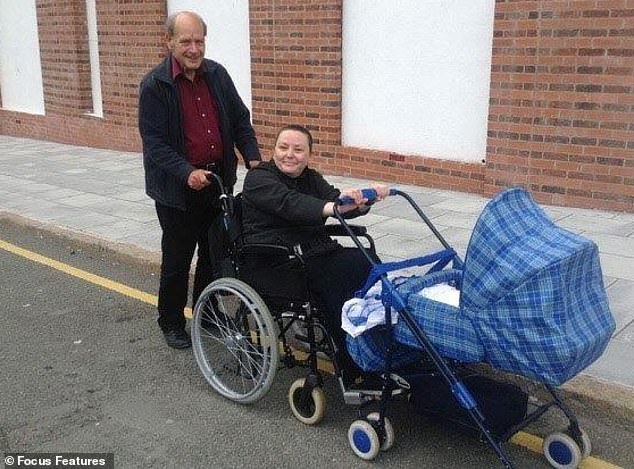 Nurses at her hospital check up love to cuddle her babies – but some people aren’t as positive, with one woman saying she doesn’t think the dolls are good for people’s mental health

‘I take a different baby depending on where I’m going. If I go for a hospital check-up, I always take a sleeping baby, and the nurses pass it around for cuddles. They love it.’

Bev admits that not everyone is positive about her unusual collection.

She says: ‘A lot of people presume the babies are real and they will lean over to make them smile. It’s only then that they realise. Most people are really encouraging and sweet.

‘One woman told Lisa that didn’t think it was good for people’s mental health – but little did she know that actually these dolls have fixed my mental health. I don’t know where I would be without them.’