A woman who has blagged Christmas for free, has revealed how gathering coupons and vouchers throughout the year allowed her to cut her spending.

Annemarie Gregory, 40, from Blackpool, Lancashire, who would splurge an average of £400 on gifts alone, has been wrapping up Christmas without spending for the past four years.

The mother-of-one has been picking up heavily discounted gifts throughout the year and using cashback websites whenever she spends, in preparation for the annual holiday.

She even managed to treat her daughter Isabella, 12, to a special trip to the Harry Potter studio tour in London using the money she’s saved – which she estimates to be ‘hundreds, if not thousands of pounds.’

Annemarie Gregory, 40, (pictured) from Blackpool, Lancashire, revealed how couponing has enabled her to get Christmas for free for the past four years 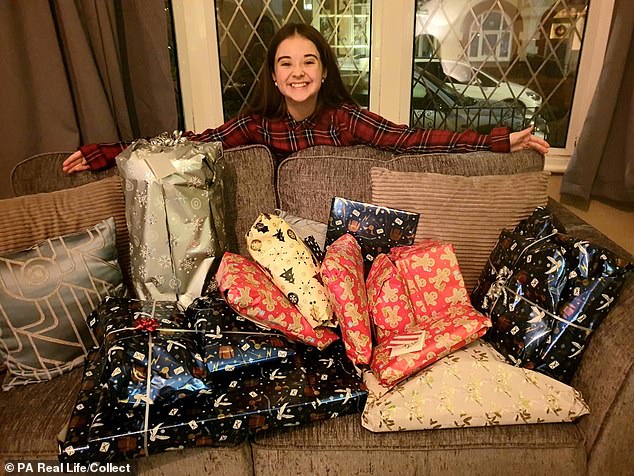 Annemarie’s money saving methods have even covered the cost of taking her daughter Isabella, 12 (pictured) to a Harry Potter studio tour for a reduced amount

The civil servant is so money-savvy that she admits she finds it difficult to pay full price for anything.

She said: ‘I think I’ve saved hundreds, if not thousands of pounds over the years. I would normally spend about £400 at Christmas on gifts for my family, but now I spend nothing.

‘I use cashback websites, where you can make money back on things you buy for anything and everything – even takeaways.

‘Even if I only save a couple of pence, I think it is worth it. Every penny saved will go towards something else, and it soon adds up.

‘I get a real buzz from it because it’s money I normally wouldn’t be saving.’

Annemarie, who is divorced, revealed she’s always had an eye for a bargain but didn’t start taking couponing seriously until around five years ago, when she began checking online first thing in the morning to see if there were any offers.

Soon after catching the money-saving bug, she began using sites such as Martin Lewis Money Saving Expert and Facebook groups like Ashleigh Money Saver to find the best deals.

She also used loyalty cards so that if there was a tight month she would still be able to save. 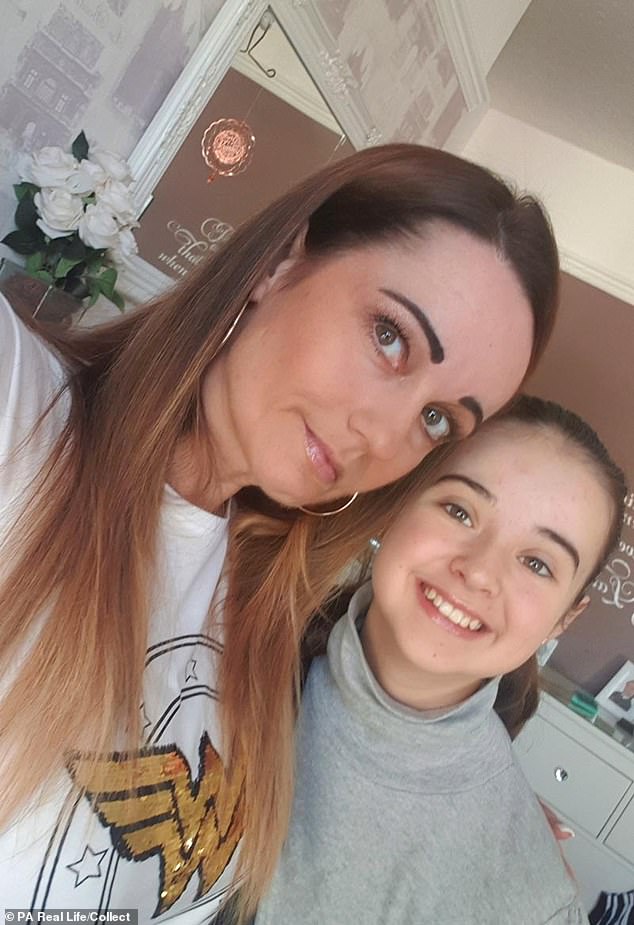 After about a year, her thoughts turned to how she could use her newfound pearls of wisdom to ease the cost of the festive season and she had her first free Christmas in December 2015.

And for the past four years, she has obtained all of her Christmas presents for free.

She continued: ‘I do a lot of shopping in the January sales, then stick everything in the attic ready for the following Christmas.

‘I also have a Boots advantage card, which I save points up on throughout the year, then use them to buy gift sets for presents.

‘Then I will look at supermarkets that have deals on, make a note and make sure to go there, and I also use websites like vouchercloud.com, which offers discounts on loads of things, to try and pick up bargains.

‘Amazon also post lightning deals early in the morning, so you have to be quick. I once got a gaming keyboard for £7 down from £35.’

One tip Annemarie swears by is shopping online through cashback websites, such as TopCashback, rather than going directly to a retailer.

This way she receives money back from everything she buys – often a percentage of the total price paid.

The mother-of-one then either puts this money aside, or converts it to vouchers, which she will give as gifts in themselves, or use them to buy her Christmas presents.

She said: ‘I’ve saved all this money basically for free, just doing what I would normally do, but buying through cashback websites instead of going direct. 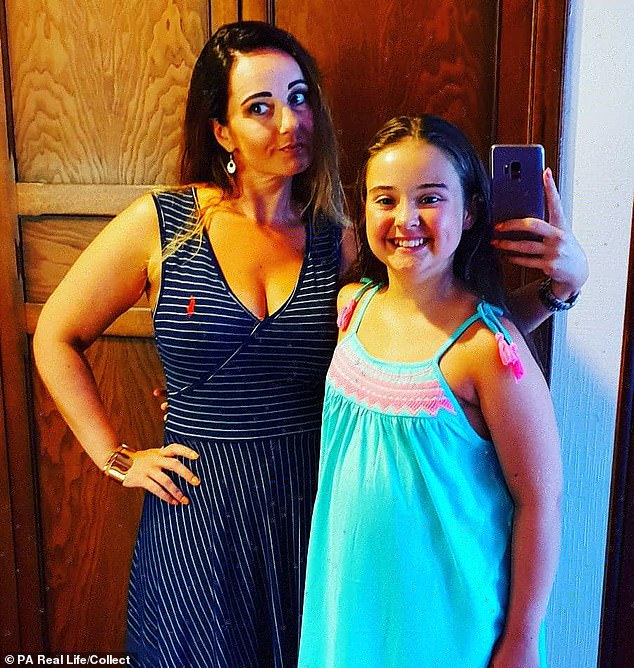 ‘I’ve been able to save up throughout the year so I can spend the money on Christmas.’

She continued: ‘I withdrew this via the TopCashback reward wallet, which gave me an extra 10 per cent bonus on a gift card, which I could then give to my daughter.

‘The rest I withdrew as Love2Shop vouchers, which can be used at loads of different high street stores. I got a six per cent bonus from the site for doing it this way rather than withdrawing the cash.

‘This year, my daughter has asked for a Fitbit, which would normally cost over £100.

‘I can use my cashback saving of £10, and then I found a discount code to get another £10 off.

‘I’ll then spend the money I’ve saved throughout the year on the rest of it, so I’m essentially getting it for free.’ 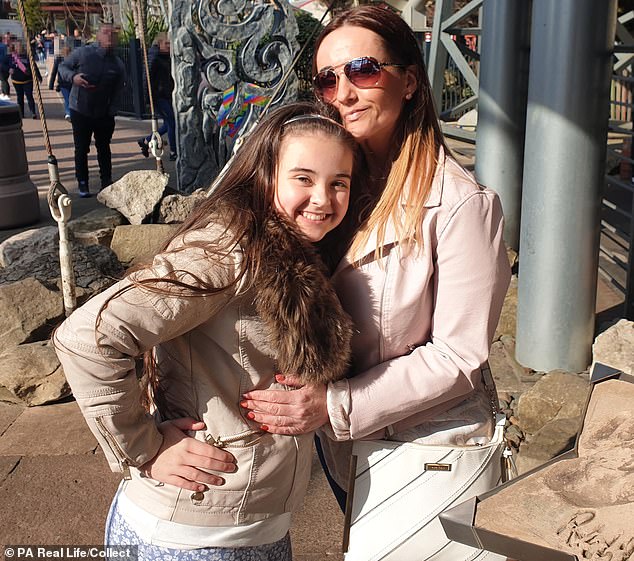 Annemarie (pictured with Isabella) plans Christmas months in advance, buying cards in January and purchasing gifts while they’re reduced throughout the year

Thinking ahead, Annemarie will buy her Christmas cards for next year at 70 per cent off in January 2020, and hunt in the sales for gift sets to be used as presents.

By doing the same thing in January last year, she bagged a beauty product gift set worth £50 for just £11.50, plus a Nintendo Switch games console, a New Look gift card, baby clothes and a Yankee candle – all paid for with loyalty card points.

‘I also pick up little reduced gift sets to make hampers for the homeless collection at the local food bank,’ she added.

‘Now, the only thing I have to buy is the Christmas dinner. It makes a huge difference.’ 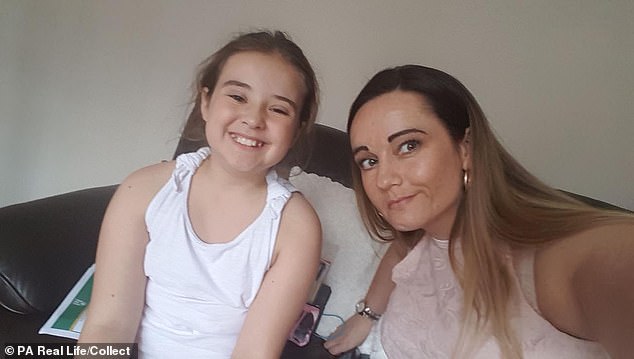 Annemarie (pictured with Isabelle) said budgeting is quite addictive, if an item she bought full price goes into the sale she will return it and buy again for the lower cost

Describing herself as ‘savvy rather than tight,’ she joked that her family love her bargain-hunting obsession, because she will sniff out deals for them, too.

She said: ‘I get annoyed if I think I’ve missed out on something even if it’s just a couple of pounds.

‘It is a bit of an obsession – I think it’s quite addictive.

‘I probably spend about an hour a day looking online for discounts, but you do have to be savvy.

‘Sometimes I will see something has gone down from £50 to £25, but then I know it will go down again so I’ll wait.

‘If I buy something at full price, and the following week it’s in the sale, I will take it back and get it refunded at the original cost price then buy it reduced.

‘A lot of it is being in the right place at the right time.’