A mother who claims she is ‘pro-vacinations’ and double-jabbed against Covid-19 has sparked debate after admitting she doesn’t want her teenagers to receive the newly approved Moderna dose.

Yesterday a health watchdog approved the use of the Moderna Covid vaccine in children aged 12-17, prompting discussion among parents as to whether they want their offspring to be jabbed.

The vaccine is currently only being offered to under 16s who live with vulnerable people or who have immune weaknesses.

But the Medicines and Healthcare products Regulatory Agency (MHRA)’s approval means some are speculating that the injection could soon be rolled-out for all children aged 12 and above.

Health chiefs last week hinted Britain may follow the US’s lead in vaccinating all children over 12. More than 10million under-18s in America have already had their first jab. Moderna’s coronavirus vaccine is expected to be rolled out in the 12 to 17 age groups in similar fashion, unless guidance changes in the next few days.

This has led to a lively debate among users of the popular parenting forum Mumsnet. 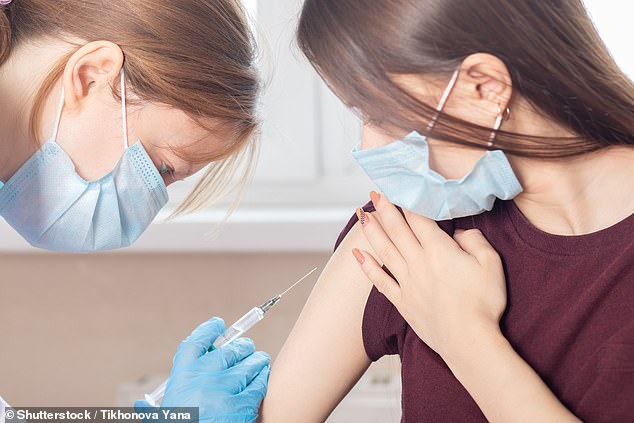 The Medicines and Healthcare products Regulatory Agency says the Moderna vaccine is safe for use in children aged 12-17. While the government is not yet offering the jab to this age group, some parents are debating whether they want their kids to have it (stock image)

One parent kicked off the debate, writing: ‘I am normally pro-vaccination and I am double vaxxed myself. I had the Moderna jab too and had a dreadful reaction to the 2nd jab. I was ill for 10 days and off work.

‘I see that Moderna has been approved for 12-18-year-olds but I really don’t want my 13-year-old to have it, especially after the nasty reaction I had to it.

‘I don’t think that I want my teenager to have any of the Covid jabs actually and I am surprised that I feel this way. I think it’s because I was so ill – it’s made me really worried. AIBU [am I being unreasonable]?

‘My kids are both fully vaxxed with all their childhood jabs so I am surprised at myself for feeling so strongly about this.’

The original poster received a range of responses – with some commentators pointing out that despite speculation, the jab is not yet being offered to all youngsters.

One commented: ‘You don’t need to know now as the UK is not vaccinating her age group. So let it sink in and see where you are when they do a U-turn.’

Multiple users believe the decision about getting the vaccine should be made by children themselves, saying 13-year-olds are old enough to choose.

One commentator pointed out: ‘I think at 13, they’d leave the final decision up to her. I had about two days worth of fever after my Moderna jab but would still encourage my DS to have it for altruistic reasons if he was old enough.’

Another user added: ‘At 13 generally such a decision is hers. YABU [you are being unreasonable]. Your bad reaction doesn’t mean she’ll have same, if any, particularly at her age. To add to the anecdata being posted I know no one with a bad reaction to Moderna. That doesn’t mean that many haven’t, just like knowing folk who have means same.’

Though others were staunchly against letting children as young as 13 make the decision for themselves, feeling they are not yet old enough to make an informed decision on such a serious healthcare matter.

One Mumsnetter wrote: ‘Too young to legally consent to sex, get a tattoo, drive a car, etc? Should a 13-year-old get to choose their own bedtime/curfew/mealtimes/diet as well? 13-year-olds are still children. This is absolutely the OP’s decision.’

Another agreed: ‘On what basis does someone think a 13-year-old child knows how to make a risk benefit analysis of whether to get the Covid vaccine or not?

‘It most certainly is a decision a parent should make. Give me strength. Do YOU even know how risk/benefit analyses are conducted by the JCVI and the MHRA?

‘There is a reason the regulators have approved the drug but the JCVI have not yet authorised widespread rollout to adolescents. A child would not be able to assimilate this information. Many adults would struggle too, and rely on health professionals to guide them on what to do.’ 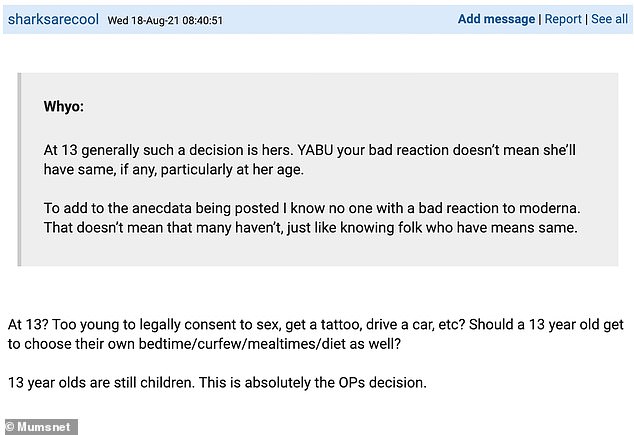 Parents disagreed whether 13 is old enough to make a decision about getting the vaccine, with one poster saying that legally, children that age are not allowed to make many serious decisions for themselves, and parents should decided

Other users noted that while the injection is not yet on offer for children, if it was a possibility, they wouldn’t hesitate in getting it.

One remarked: ‘Since you asked – I think you’d be out of your mind not to give your child the vaccine. As soon as my children are eligible, I will be there like a shot.’

Speaking on the decision to authorise the jab’s use for kids, MHRA chief executive, Dr June Raine said: ‘I am pleased to confirm that that the COVID-19 vaccine made by Moderna has now been authorised in 12-17 year olds.

‘The vaccine is safe and effective in this age group. We have in place a comprehensive safety surveillance strategy for monitoring the safety of all UK-approved COVID-19 vaccines and this surveillance will include the 12- to 17-year age group.

‘It is for the Joint Committee on Vaccination and Immunisation (JCVI) to advise on whether this age group should be vaccinated with the COVID-19 vaccine made by Moderna as part of the deployment programme.’

Another said they feared their child could face more risks from getting the jab than not getting it and potentially contracting the virus.

They wrote: ‘I feel exactly the same OP, really conflicted about this, and no I don’t think my [son aged 12] had the capacity to make an informed decision.

‘I’ve had the jab. I’d already had the AstraZeneca when the stories of blood clots came out. I wouldn’t be allowed to have that jab now because of my age.

‘That worries me, they rushed that through and I don’t want my child to end up ill from a vaccine, when it’s extremely doubtful he’d be ill from Covid.’

One commentator took a more balanced approach, saying that while they did think the original poster would be unreasonable to stop their 13-year-old from getting the vaccine, it is a complex situation.

They wrote: ‘Yes [you would be being unreasonable] if you would be very sick, that is, which generally isn’t the case for children and Covid, so it is a bit of a murky area ethically, IMO.

‘I feel the same about the flu jab and a couple of others though. I think vaccinations should protect the person being vaccinated, not other people. I certainly don’t think children should be asked to have an invasive procedure for the benefit of adults.’

All 16 to 17-year-olds in England will be offered their first dose of the Covid jab by August 23.

Moderna is the second vaccine to be given the green light for children after Pfizer, which was approved in June. The MHRA authorised the jab’s use – also known as the Spikevax – in young teenagers following a review.

Safety data reportedly showed the injection’s reaction in children was comparable to that seen in young adults, with the majority of adverse events ‘mild to moderate’ such as a sore arm or tiredness.

The Department of Health has asked its inoculation advisory panel, which is separate from the MHRA, for a formal recommendation.

Both Moderna and Pfizer’s jabs have been linked to myocarditis, a rare heart problem believed to affect around one in 20,000 young people.

The Joint Committee on Vaccination and Immunisation (JCVI) has claimed the risk of heart inflammation still outweighs the benefit of Covid jabs for healthy under-16s.

The JCVI will look at Moderna’s trials of its Covid jab in children before making a recommendation. The panel will likely look abroad to rollouts where the vaccine is already being given to children.