The Nationals’ freshly elected members of federal parliament vote for a leader next week and their choice looms as one of the most significant for the country party, which can either veer further to the right or circle back to the centre of the political landscape.

Incumbent leader Barnaby Joyce is expected to throw his hat into the ring when the party meets on Tuesday, the first time the 16 MPs and 6 Senators will meet since the election loss. 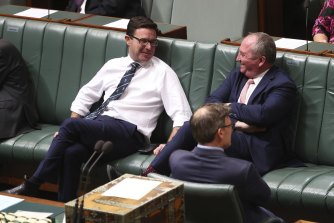 David Littleproud and Barnaby Joyce are key players in the Nationals leadership, which is set to be contested on Tuesday.Credit:Alex Ellinghausen.

There are more than a handful of angry Nationals who want to see him gone and the key issue is once again the climate wars that have dogged Australian politics for a decade.

Neither Littleproud nor McCormack can be classed as progressive, but their acceptance of net zero emissions is seen by their backers as a necessary position for the Coalition to win a future election.

The Liberals lost 17 seats in the election count so far, including formerly blue-ribbon electorates in Sydney and Melbourne where teal independent candidates campaigned against the prospect of a future Coalition government with Joyce as Deputy Prime Minister.

While the Nationals retained all their seats amid a swing away from conservative parties, it went backwards in 12 of its 16 seats, and four formerly safe Nationals seats became marginal.

Joyce’s public perception as a fossil fuel dinosaur featured prominently in the election campaign and many in the Coalition believe he’s so toxic in Liberal electorates it kills the Coalition’s chances of regaining government.

A countervailing view among the other half of the party room is Joyce is a strong performer in opposition who would take the fight up to Labor over their greenhouse emissions reduction plans that will require big changes to the agriculture and mining industries.

Last year the Nationals agreed to a deal with former Prime Minister Scott Morrison to agree to his policy pledge for net zero greenhouse emissions in exchange for a $21 billion regional fund.

The deal for net zero was approved by a vote in the Nationals party room, where Joyce argued against committing to climate action.

McCormack told this masthead on Tuesday that Joyce shared the blame for the election result because “teal candidates used our party leader’s name against the Liberals in their inner-city campaigns”. But it’s unlikely McCormack would get support from more than a few colleagues.

He is expected to be outperformed by Littleproud, who is tipped by Nationals MPs and senior party figures to be within striking distance of Joyce, but he’s yet to decide if he wants to contest the ballot.

Further weighing on Littleproud’s mind is the expectation that three or four undecided Nats could shift their vote between him and Joyce on voting day.

Another risk Littleproud and McCormack must consider is former Resources Minister Keith Pitt, MP for Hinkler in Queensland. Also from the right of the party, Pitt is expected to oppose net zero in opposition and is expected to put his shingle out for the leadership on the off chance Joyce declines to stand.

Yet one more MP who backs net zero, Darren Chester from Gippsland, has told this masthead he is considering a run at the top job, but it appears doubtful he can muster the numbers. Chester is relatively progressive for a Nationals representative and several senior party members told this masthead they viewed him as a stalking horse whose aim was to undermine Joyce’s position.