If you’re going on spring break this year, there’s a good chance that you’ll be stocking up on your favorite boozy beverages for the weekend (if you’re 21 years old, of course). Those of you who are hoping to fill your fridge with tasty brews might want to consider trying Natural Light’s "Naturdays" strawberry lemonade beers. The new cans are literally brewed with strawberry lemonade flavor, and they’ll transport you to a flamingo-filled beach with every sip. (OK, not really, but you get what I’m saying.)

In case you missed it, Natural Light initially announced its Naturdays beers at the end of February. Luckily, the pink-and-yellow ombre cans are currently making their way across the country. According to a Natural Light press release, the strawberry lemonade-flavored brews will be available nationwide, which means you should be able to pick them up at your local store in a matter of time (if not already). With that being said, make room in your cooler for Natural Light’s sweetest beer yet.

Before I get into more detail about the beer itself, let’s take a look at its can. As you can see, it features Natural Light’s classic logo on top of a gradient background. There’s also a decorative flamingo pattern surrounding the logo, which makes it even more perfect for the spring and summer months ahead. 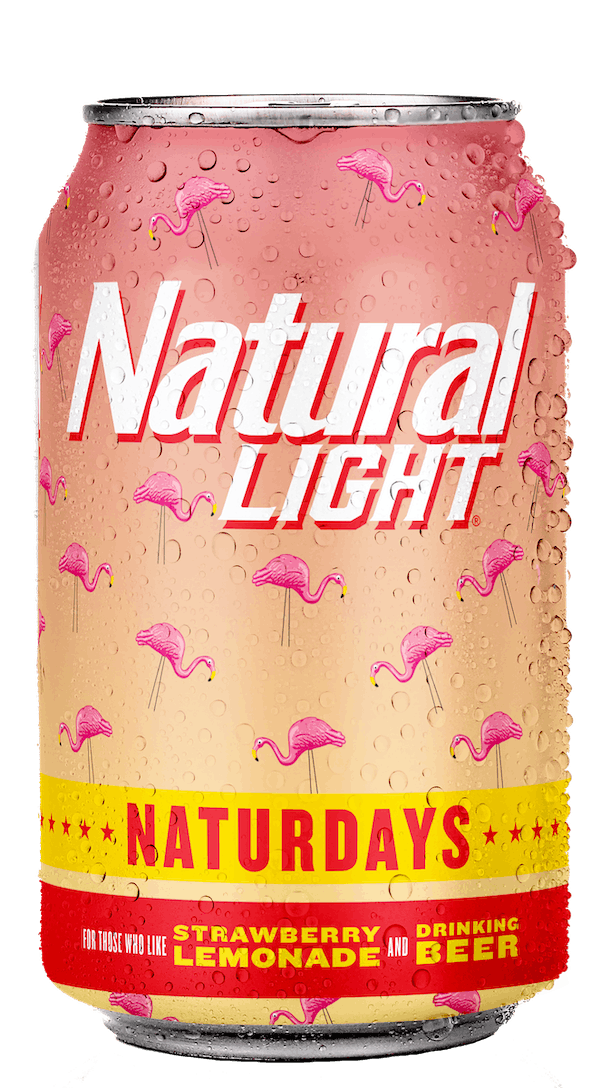 Now that you know what the beer can looks like, let’s talk about the actual beer. According to Natural Light, the Naturdays beer is a "sessionable light lager," so don’t expect something heavy before cracking a can open. FYI, a "sessionable" beer typically has an ABV that’s less than 5 percent, per Beer Advocate. This makes sense, because Naturdays’ ABV is 4.2 percent, according to Natural Light. Still, you should drink it responsibly.

Daniel Blake, Senior Director of Value Brands at Anheuser-Busch, talked about the new beer flavor in a Natural Light press release. He said,

I don’t know about you, but I’m really excited to give it a try. I like beer and strawberry lemonade-flavored drinks, so I’ll probably love it.

If you end up loving it, too, you can head to your local store and start stocking up on the cans. Again, they’re currently making their way across the nation and are likely in stock at your local store.

If beer isn’t your thing (flavored or not), don’t fret. You can still try sweet new drinks on behalf of the spring season, like Applebees’ Absolut Rainbow Punch. According to a March 1 press release, the new boozy beverage combines Absolut vodka with lemon, ginger, and green apple flavors (YUM). Plus, it’s topped with a gummy rainbow that’ll really put you in the mood for spring. It’s only $2 and will be available throughout the month of March, so sip on it while you can.

Whether you choose a Naturdays can or Absolut Rainbow Punch, you’ll get the perfect amount of springtime flavors. As always, drink responsibly.