Nelly stole the show at the 2021 BET Hip Hop Awards with a medley performance of his greatest hits, such as ‘Dilemma,’ ‘Where the Party At,’ and of course, ‘Hot In Herre.’

It’s getting “Hot In Herre” in here, and that’s because we just watched Nelly‘s incredible performance at the 2021 BET Hip Hop Awards. The 46-year-old legendary rapper took the stage at the Oct. 5 awards show, where he received this year’s “I Am Hip Hop” honoree. But Nelly’s shining moment of the night was his action-packed medley performance of some of his most iconic hit songs of all time. And yes, he sang “Hot In Herre.” See the full performance below!

The 8-minute-long performance kicked off with Nelly stepping out of a car on the stage to sing his 2000 track “E.I.” The superstar was joined by a group of female background dancers dressed in red as his performance carried on with his hit songs “Country Grammar,” “Dilemma,” and “Where The Party At,” which featured a surprise appearance from Jermaine Dupri.

After Nelly covered “Air Force Ones” and “Grillz,” he closed out his show-stopping performance with “Ride Wit Me” and “Hot In Herre,” both of which got the audience moving in the crowd. As expected, the Grammy winner dressed casually for his big performance in a white T-shirt, jeans, and a red hat. He danced along to his hit tunes as well, and overall the performance just proved that Nelly really is a legend. 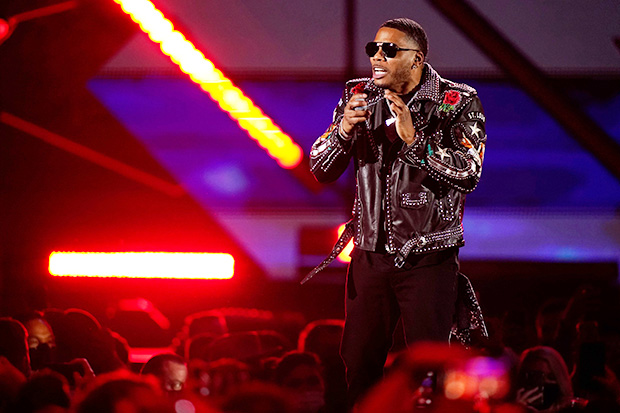 Before the medley, Nelly stepped out on the stage to graciously accept the “I Am Hip Hop” award. During his speech, the former Dancing with the Stars finalist gave a special shoutout to his native St. Louis, Missouri. “We don’t get a lot of this. We don’t get a lot of chances to stand on stage and say, ‘Yeah, this is our turn,’ ” Nelly said. “So this ain’t just for me. It’s for my whole area, my whole city.” Nelly went on to specifically thank his pal LL Cool J for inspiring him in his career. He said, “The influence he put on Nelly was incredible because all up until LL, I thought you had to be one way to be a rapper. I never looked at rap a certain way until that man, until that man did his thing.”

Nelly rose to fame following the release of his debut album, Country Grammar, in 2000. His follow-up album, 2002’s Nellyville, produced some of the star’s most iconic songs. He’s released six albums since then, with his latest album, Heartland, being released on August 27, 2021.