Instagram is the second most popular social media platform in the world, behind Facebook. In the less than ten years it has existed, the photo-sharing program has absolutely exploded in popularity, and added a ton of new features. If you’re an OG Instagrammer, you might recall the original icon resembled a vintage camera, and stories weren’t a thing at all. But as of today, Instagram has added yet another thing you can share with your followers: movies! Well, kind of. iOS users can now share their favorite Netflix movies and TV shows on Instagram Stories.

Variety reports Netflix has teamed up with Instagram to let users show off what they’ve been marathoning. The brand integration makes it easy to add snaps of some of Netflix’s most popular programs to your story. You’ll need to have a Netflix account and both the Netflix and Instagram apps to use the feature. Once you’ve updated the app, you’re all set to add some Netflix flare to your story. Do this by selecting the title of a program on the Netflix iOS app, and sharing it directly to Instagram. From here you can either add it directly to your story, or share it directly with their contacts.

Program titles shared are accompanied by Netflix’s default art, but users can personalize the post further, naturally. The stickers and GIFs you know and love can be added to Netflix movie stories. Comments, too! Best of all, every movie or TV show shared on Instagram links back to Netflix, allowing your pals to start watching your favorite show with just a click.

“We’re always on the lookout for ways to make it easier for members to share the Netflix titles they’re obsessing about and help them discover something new to watch. We hope our members enjoy this new feature!” a Netflix spokesperson told Variety.

The development comes almost a year after Instagram first opened up Stories to third-party developers for similar integrations. In layman’s terms, this is why you can link a Spotify or Soundcloud song to your stories. Bad news for Android users, though: as of now, the Netflix sharing service on Instagram stories is only available on iOS devices. But, if users like it, it’ll probably be available on more platforms in the near future. 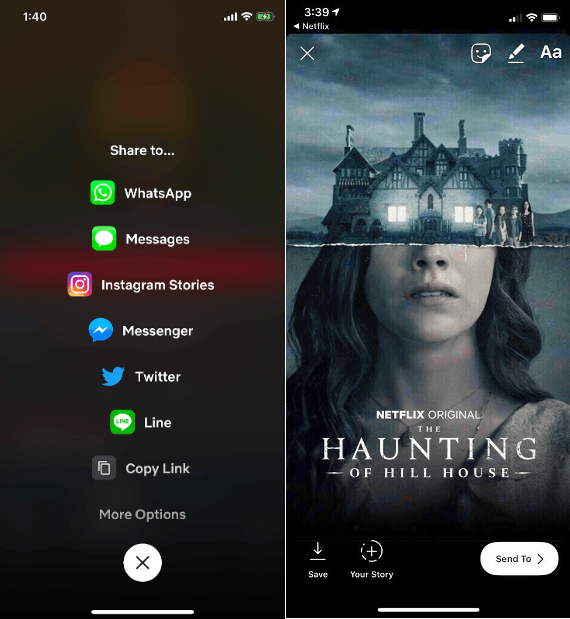 Instagram is, in many ways, unrecognizable from the program that people were using this time last year. 2018 was filled with new developments that significantly change the user experience. GIF stickers, the mute button, and, of course, the ever-popular question feature were all introduced last year. A countdown button, which allows you to input a date, then have a real time clock count down to it, was also added.

With a staggering 500 million+ active users, Instagram’s popularity is pretty much unrivaled. Forbes also noted the number of advertisers on Instagram basically doubled in 2017, due in large part to the fact the platform embraces and encouraged customer engagement. This basically means brand are able to influence their customers on the platform more easily than on others. The Netflix partnership is a good example of this. When you post the Netflix show you’ve been watching with a link attached, there’s a good chance someone else will click on said link to watch the show.

All that’s left to do now is pick your favorite and post.