A federal judge released video footage Monday that prosecutors say shows leaders of the far-right group the Proud Boys outside the U.S. Capitol on January 6, and also a violent mob surging past police attempting to guard the building.

The videos had been played in court proceedings related to the federal case against Charles Donohoe, a North Carolina man who prosecutors said is president of his local Proud Boys chapter, and who has been indicted, along with three other alleged Proud Boys, on charges that include conspiracy, destruction of government property and obstruction of law enforcement during a civil disorder.

The footage — which provides a rare look at the actions of alleged Proud Boys at the center of a high-profile Capitol riot conspiracy case — was released for public viewing after a coalition of media outlets, including CBS News, filed a motion for access.

One of the videos shows a group that includes alleged Proud Boys gathered on the East Side of the Capitol. One person can be heard yelling, “Let’s take the f***ing Capitol.”

Another man in the group, who has his face covered, admonishes the group, “Let’s not f***ing yell that, alright?”

In the background, another person can be heard saying, “Don’t yell it. Do it.” 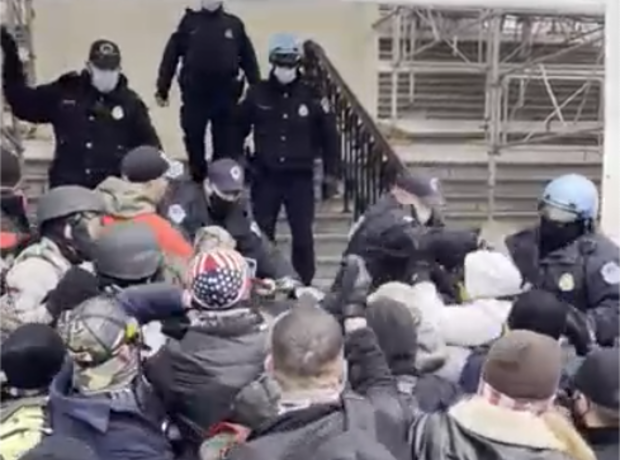 In another clip, Donohoe is seen standing amid a mob of rioters facing off against police outside the Capitol building. The mob surges forward, shouting and pushing back the police line. As they move forward, some can be seen spraying chemicals and throwing objects in the direction of the retreating police.

In another video released Monday, Donohoe is seen with another alleged Proud Boy, Dominic Pezzola, as the two carry a police riot shield through the crowd. As Pezzola passes through the frame, the person filming asks, “You just stole a riot shield?” Off screen, a man’s voice can be heard responding, “Yeah.”

Pezzola has been accused of using that same riot shield to smash a window at the Capitol, which prosecutors said allowed multiple rioters to enter the building and force open an adjacent door from the inside. Pezzola has pleaded not guilty.

Donohoe is not accused of entering the Capitol January 6, but is accused of using encrypted messaging applications and handheld radios to coordinate with others during the attack. Prosecutors have argued that Donohoe held a leadership role within the Proud Boys and “commands influence” over the group, and that he joined others in storming past barricades and police officers in efforts to disrupt election proceedings at the Capitol.

Donohoe has pleaded not guilty, and a judge has ordered he remain behind bars pending trial.

The Proud Boys are a nationalist group self-described as “Western Chauvinists,” and have vocally supported former President Donald Trump. At least 15 alleged members or affiliates of the Proud Boys have been charged with conspiracy in four separate cases.

In total, at least 35 Capitol riot defendants have been charged with conspiracy. They include 16 Oath Keepers, who were indicted together in a single conspiracy case, and four alleged Three Percenters.

Fritz Farrow contributed to this report.