For generations, his name struck fear in Manhattanites’ hearts.

Year in and year out, with fatalistic regularity, envelopes bearing that name would invade the homes of the unwary, the unwilling and the unready.

On each of them, a printed signature loomed sternly over the upper-left-hand corner: “Norman Goodman,” the name appended to the borough’s jury summonses for nearly half a century.

“There are signatures that are more famous,” Mr. Goodman once said. “But mine is notorious.”

Mr. Goodman, who died at 95 on Thursday at his home on the Upper East Side, was for 45 years the clerk of New York County — Manhattan, by any other name. Though the clerk’s office juggles myriad duties, from handling local business filings to operating a passport service, it was as a summoner of jurors that he was most widely, if not most fondly, known.

A lawyer, Mr. Goodman was one of the city’s longest-serving public employees, as redoubtable an institution as the Automat and even more enduring. He held the county clerk’s post, in principle a lifetime appointment, from 1969 until his retirement on Dec. 31, 2014, the day after his 91st birthday. During those years, he issued between 11 million and 12 million jury summonses.

So deeply ingrained in the city’s fabric was Mr. Goodman that many New Yorkers assumed he was a fictional creation — the judicial system’s answer to “Alan Smithee,” the pseudonym used by Hollywood directors needing to put a name to films they disowned.

As The New York Times reported in a 2006 profile, “He is not oblivious to the curiosity his name arouses, and has been known to tell public gatherings: ‘I’m Norman Goodman. I exist.’ ”

Mr. Goodman, whose titles also included clerk of the State Supreme Court and commissioner of jurors for Manhattan, was widely credited with modernizing the borough’s jury selection process. In addition, he oversaw restorations to the venerable State Supreme Court building, at 60 Centre Street in Lower Manhattan, and helped conserve judicial records going back to the 17th century.

Honoring Mr. Goodman in 2008, the Historical Society of the Courts of the State of New York, a preservation group, called him “the dean of the county clerks serving in the 62 counties of the state.”

Manhattan is home to more jury trials each year than any jurisdiction in New York State, and the county clerk’s office is responsible for convening juries for every state trial, civil and criminal, conducted in the borough.

Each week, the office — Mr. Goodman superintended a staff of more than 100 — issues some 6,000 jury summonses. To hear Mr. Goodman tell it, Manhattan’s hunger for jurors seemed rivaled only by Manhattan jurors’ hunger to slip their bonds.

From his office at 60 Centre Street, the large, rumpled and quick-witted Mr. Goodman commanded a ringside view of human nature, especially where the arts of posturing and prevarication are concerned.

Part mind reader, part truant officer, part medical diagnostician, part forensic investigator, he fielded a litany of excuses from the scores of angry men, and women, who sought him out each week.

There was the young man who, as The Times reported in 1986, told Mr. Goodman that his religion forbade him to sit in judgment.

“Jesus said, ‘Judge not, lest you be judged,’ ” the young man said. 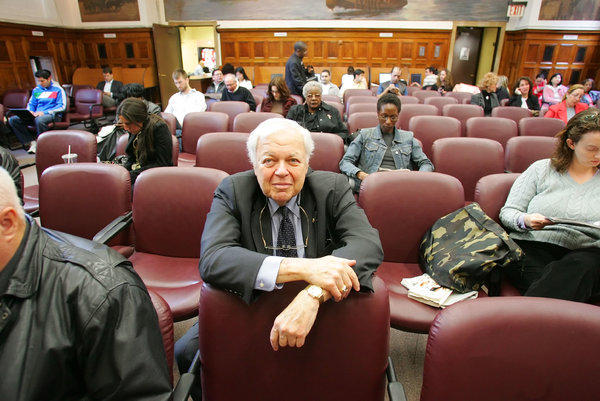 On one occasion, the wife of a man called for duty mailed Mr. Goodman what purported to be her husband’s ashes. He sent them to a lab for testing. The verdict: cigarette ash.

To parry a parade of medical excuses, Mr. Goodman kept a medical dictionary close at hand.

“I always say that people have to have a medical condition worse than mine,” he told Newsday in 1992. “People come in and they say to me, ‘I’ve got a pacemaker, so I can’t serve.’ Well, I’ve got a pacemaker and I come to work every day. And what I’m doing is more burdensome than jury service.”

Mr. Goodman also helped shepherd flocks of Manhattan celebrities called for duty. Many responded willingly, among them Robert De Niro, Harvey Keitel, Roberta Flack, Henry Kissinger and Madonna. (Mr. Goodman’s office walls were hung with photos of the amiable famous.) His job put him just one degree of separation away from Kevin Bacon, who also reported for service.

Under Mr. Goodman’s watchful eye, however, even cooperative stars could see their prospects dimmed by their own luminosity. He saw it happen the day Harry Belafonte entered the jury assembly room.

“Everybody burst into applause,” Mr. Goodman told The Associated Press in 1992. “As far as I’m concerned, that guy can’t sit on a jury without dominating the jury.”

Others’ prospects were dimmed by their own behavior, as when Woody Allen arrived in the assembly room to find every seat taken.

“I told him to wait 10 minutes and a seat would open up, but he said he didn’t want to sit because he’s claustrophobic,” Mr. Goodman told The Daily News in 1998. “He didn’t want any attention, but he’s standing in the middle of the assembly room wearing an Army jacket and this Sandinista cap.”

Nevertheless, under Mr. Goodman, juries grew more ecumenical. He argued for eliminating the time-honored professional exemptions that let members of 22 trades — including doctors, lawyers, podiatrists and embalmers — abstain from serving.

After the exemptions were eliminated in 1996, Rudolph W. Giuliani, then the mayor of New York and a former federal prosecutor, wound up as the foreman of a jury hearing a 1999 personal-injury case. Mr. Goodman, summoning himself and responding obligingly, served at least once.

Norman Goodman was born in New Haven on Dec. 30, 1923. His father, Samuel, was in the dairy business; his mother, Lena, was a housewife.

He earned bachelor’s and law degrees from New York University and practiced in New York for more than a decade. Active in Manhattan Democratic Party affairs, he was named first deputy county clerk in 1966 and promoted to the top post three years later.

His achievements in the job included computerizing jury selection and overseeing the microfilming of sheaves of historical documents, including records from Alexander Hamilton’s law office, plagiarism suits by Mark Twain and the divorce papers of Aaron Burr.

He died of a “combination of Parkinson’s disease and other things,” his daughter Susan Goodman said. In addition to her, he is survived by another daughter, Nan Goodman; a brother, Bob; and two grandchildren. His wife of 69 years, Ruth (Weissman) Goodman, a teacher, died in 2017.

In 2008, the jury assembly room at 60 Centre Street was renamed in Mr. Goodman’s honor.

If, in the line of duty, Mr. Goodman heard every imaginable excuse for evading service, there were a few with which even he was forced to concur.

Once, long ago, as he told The Los Angeles Times in 1986, he was persuaded that the target of his summons had moved safely out of reach.

“I got a letter back,” Mr. Goodman recalled, “saying: ‘Mr. Nixon no longer lives on Fifth Avenue. He now lives at 1600 Pennsylvania Ave.’ ”