Most couples love quality time together – perhaps a stroll up the river hand-in-hand or maybe even a spot of brunch – but one husband and wife make their downtime rather more edgy by doing everything naked.

Lauren, 35, and Liam Cornell, 39, from Cape Town, South Africa, share a combined love of naturism and often go for naked rambles in the countryside – documenting their bare-buttocked jaunts in a series of photographs.

Escaping the city several times each week and venturing into the great outdoors, the professional photographers strip down to their birthday suits and roam across the land, aiming ‘to recapture the innocence and freedom of being a child’.

‘I think because today’s culture mostly sees nudity as something sexual, people really like the fact we go naked for the pure pleasure of feeling liberated in the outdoors, without any sexual reason for it,’ Lauren explained. Lauren, 35, and Liam Cornell, 39, from Cape Town, South Africa, met in 2006 when they were working on a farm together, training animals for films and commercials 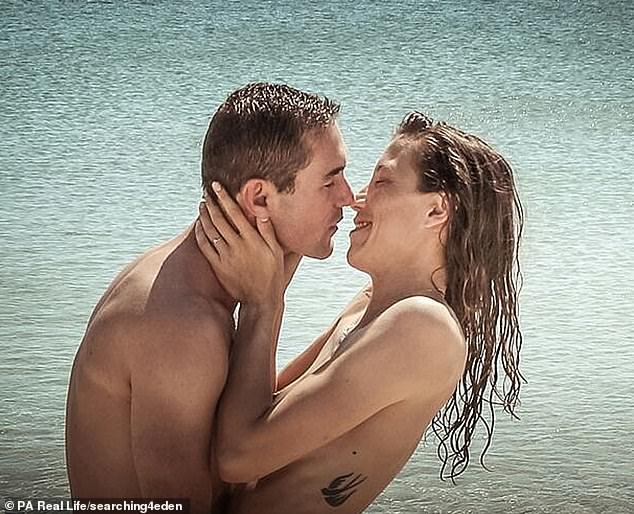 The bare-bottomed couple, who tied the knot in 2016, bonded over their love of nature and the South African wilderness – something which later progressed into naked rambling Having wanted to do a series of naked pictures for some time, the couple decided to combine nudity with their love of long country walks in the bush and photography 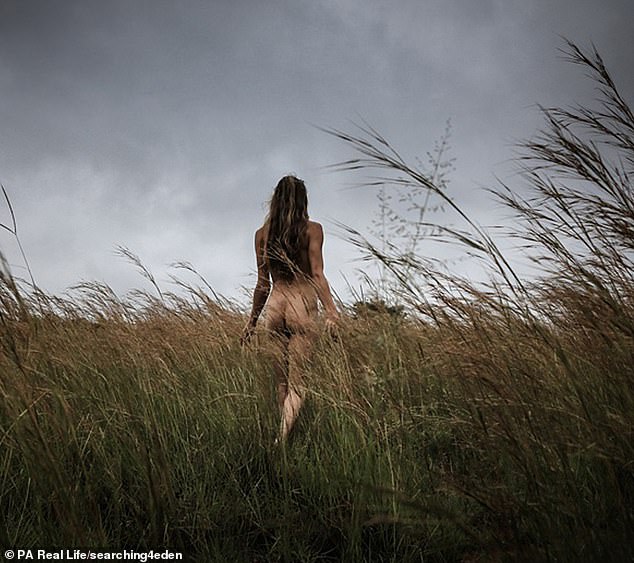 The professional photographers strip down naked and roam across the land. Lauren said in doing so, they aim to ‘to recapture the innocence and freedom of being a child’ 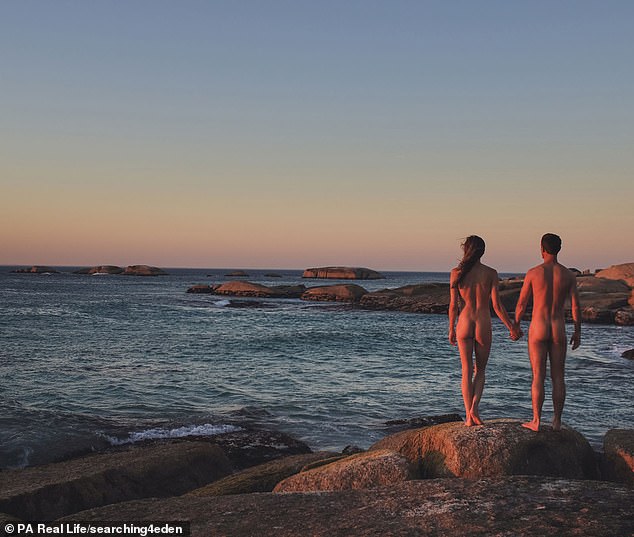 Naked ambition: The loved-up couple document their naked adventures in a series of photographs and post them on their social media page, which is called ‘Searching 4 Eden’

‘We are obviously very aware that most people think of nudity in a sexual context, which is not at all why we do it,’ said Lauren.

‘It’s really much more about feeling natural within nature and tapping into that sense of being wild and free.

‘The fact that I can do that with my husband and soul mate makes it all the more special.’

The couple met in 2006 when they were working on a farm together just outside Cape Town, training animals for films and commercials.

Since posting a series of pictures of their naked adventures, called Searching 4 Eden, on social media, they have made such an impression that some of their followers even join them on excursions in the buff.

‘People have really connected with the series and it has been wonderful to see the level of support we’ve got from it,’ explained Lauren, adding that some of their new walking pals have struggled with body image in the past and are striding out naked to face their fears.

‘It’s been life-changing for us and hopefully for others, too.’ A leap into the unknown: Lauren said she loves feeling at one with nature and ‘tapping into that sense of being wild and free’ 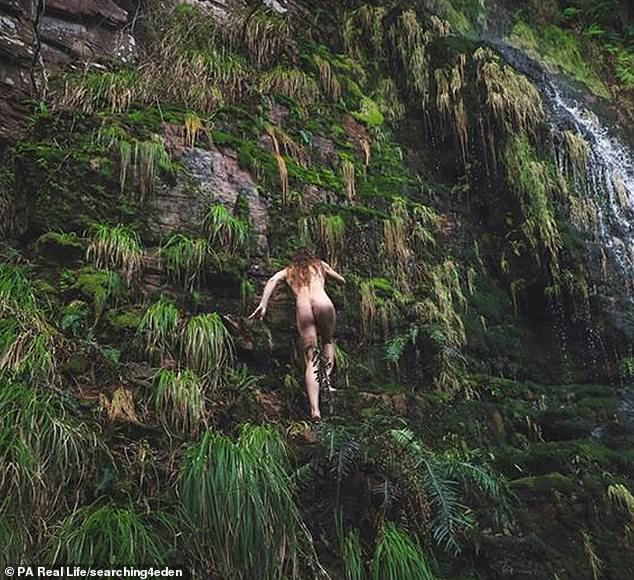 Snaps such as this one from their natural picture diaries have helped the couple amass over 47,000 followers on social media Baring all: Lauren said the fact she is able to strip down with her ‘soul mate’ makes it ‘all the more special’ 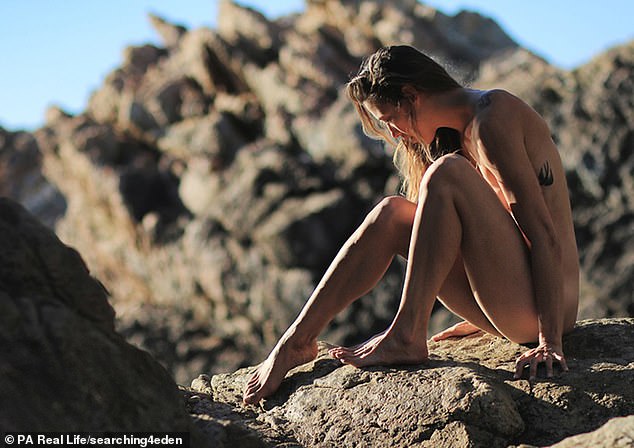 Not only have the naked adventures been ‘life changing’ for Lauren, but also for her social media followers who now join the couple on their adventures, as many struggled with body image

Lauren and Liam, who started dating soon after they met and went on to marry in 2016, bonded over their love of nature and the South African wilderness – something which later progressed into naked rambling.

‘Sharing that passion for going on hikes together up in the mountains was really important in building our relationship,’ said Lauren. Lauren used to photograph wildlife, but as it was such a competitive industry, she struggled to make a living out of it. Their naked rambles was the perfect way to get them back into the countryside

‘We both live in the city, but neither of us are really ‘city people’ and we feel quite trapped when we are there – so we love getting out as much as possible.’

Already enjoying a joint love of nature and hiking, keen photographer, Liam – who spend a lot of spare time taking pictures of the farm’s animals – started teaching Lauren how to use a camera properly and how to snap wildlife.

This swiftly became a shared interest and when they left the farm in 2007 and moved back to Cape Town, they again worked together – this time as photographers, shooting family portraits, events and products for adverts.

But while commercial shoots paid their wages, their hobby – and passion – remained photographing wildlife.

‘We love photographing wildlife, but in South Africa it’s a very competitive market,’ explained Lauren. ‘It’s hard to make a living out of it, so we wanted somehow to find a venture that would get us back out into the countryside.’

Then, having fun with some photographer friends, snapping each other skinny dipping in the pool at Lauren’s mum’s, they had a brainwave. 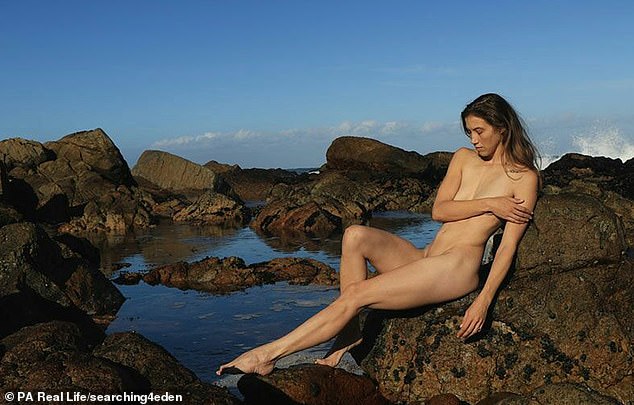 The idea to photograph their naked rambles came during a lightbulb moment when they were having fun with some photographer friends, snapping each other skinny dipping in the pool. They then saw how ‘beautiful’ the ‘natural and innocent’ shots were and decided to turn it into a hobby 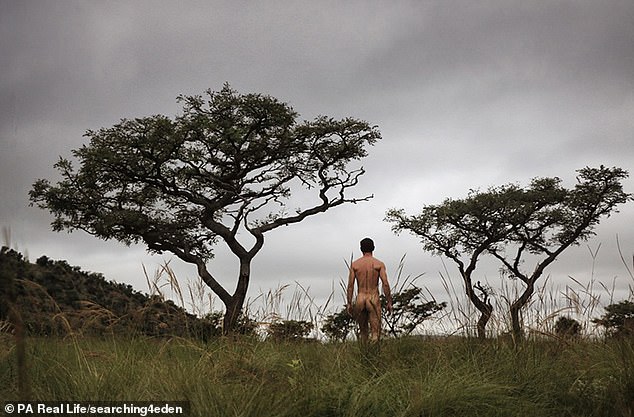 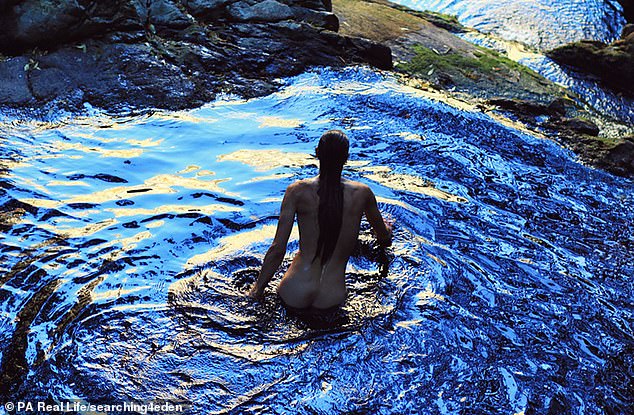 ‘We were all just mucking around together in the pool quite late one night and, because we were all photographers, we were, of course, taking pictures,’ said Lauren.

Having wanted to do a series of naked pictures for some time, the couple decided to combine nudity with their love of long country walks in the bush and photography.

But, never having been so public about nudity before, Lauren admits that her first trip into the bush in the buff took courage. 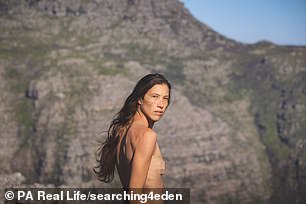 Natural beauty: Lauren stares into the distance during one of her natural shots

‘It was slightly awkward,’ said Lauren.

‘We had decided to go with friends the first time and it was a bit uncomfortable, stripping off in front of someone like that.

‘But, after a while, we realised that they were feeling just as nervous and the anxiety was replaced by a feeling of freedom.’

Soon the couple were heading out together on hikes on a regular basis, driving to a secluded spot 60 miles from Cape Town, then stripping off and strolling through the plains and mountains surrounding the city in their birthday suits – later posting snaps of their adventures on Instagram.

And before long, they had gathered 47,000 followers – gleaned from like-minded folk who liked open, natural picture diaries and nudity.

‘People really took to it,’ explained Lauren. ‘They would send us messages saying how much they liked the pictures and the idea behind it, so we said, ‘Well, why don’t you come along and join us?’

‘So, pretty soon, we’d have several other naked people with us – some friends, some complete strangers.’ 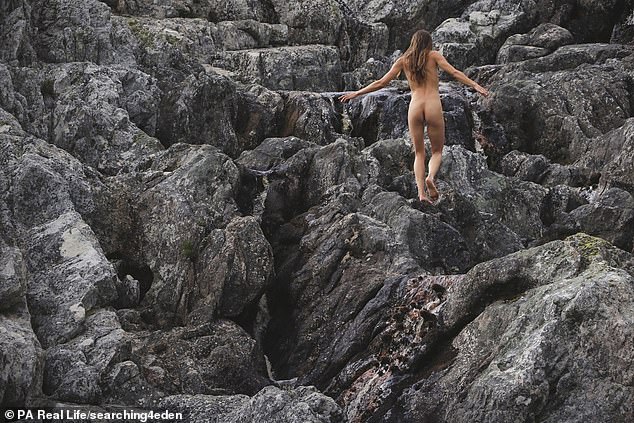 Bare-bottomed beauty: Lauren can be seen here walking up the rocks bare-footed as her husband artistically photographs her 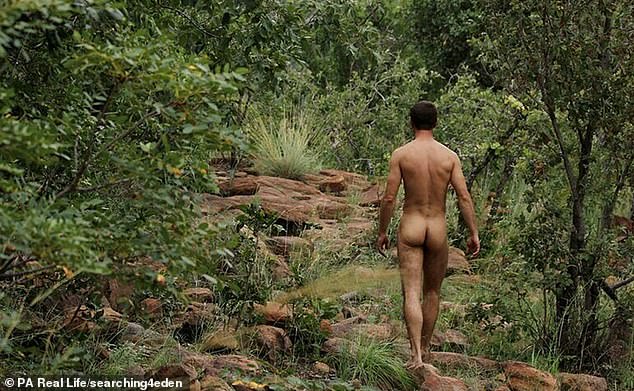 While the couple feel free on their naked rambles, it doesn’t come without its worries. The couple say snakes, including adders and cobras, which have venomous bites, are a real concern But naked trekking is not without its dangers – both from the venomous inhabitants of the bush and fellow fully-clothed trekkers.

‘Snakes are a real worry, as in South Africa, we have adders and cobras – both of which have venomous bites,’ said Lauren.

‘Other people can also be a concern, because South Africa is still quite conservative, and wandering around naked can provoke strange reactions from some people – so we have to make sure we are quite far away from most of the hiking trails.

‘Occasionally we come across people who are so shocked that they just stand there and stare at us and give us a disapproving look and stomp off.’ Wild and free: Lauren said they have been joined by people who were ‘not comfortable with the way they looked, or had had psychological traumas.’ For them, hiking naked allowed them to see how beautiful they looked on the camera 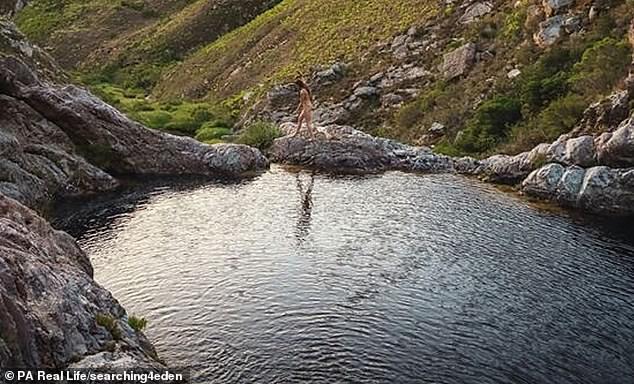 Still, undeterred by hostile reactions, the couple plan to keep up their naked ramblings while they are fit enough to do so, and will continue posting their nude snaps for as long as people are happy to see their ageing bodies.

They also hope to keep inspiring other people to take up the mantle and embrace the joys of letting it all hang out.

‘It has been very life-changing for us and has given us an immense amount of pleasure,’ said Lauren. ‘And I hope that it can be for others, too.

‘We’ve been joined by some people who were really not comfortable with the way they looked, or had had psychological traumas, but they said that hiking naked with us and seeing how beautiful they looked on camera afterwards, was an incredible feeling.

‘If that’s what nudity can do for people then we should all give it a go.’