Oprah is not here for negativity about Meghan Markle. The (I don’t know what to call her… mogul? Queen? Patron saint? Let’s go with…) public figure made an appearance on CBS This Morning for an interview with the sister everybody would want, Gayle King, and talked all about the Sussex royal. And Oprah Winfrey’s comments defending Meghan Markle from unfair press is exactly the kind of supportive content you’d expect to see from her.

Winfrey attended the royal wedding in May and is now working with Prince Harry on a series about mental health, so safe to say she knows a thing or two about the Duchess of Sussex. In her talk with King, Winfrey said she doesn’t feel Meghan is painted in the fairest light in the press and that she thinks that’s a shame.

"I think she’s being portrayed unfairly," Winfrey said, "and I feel that if people really knew her they would know that she is not only everything we perceive of her, in being graceful and dynamic in holding that position, but she just has a wonderful, warm, giving, loving heart. I think it’s very unfair."

It’s true that Meghan gets a lot of negative press surrounding her, despite her appearing to be an overly positive and kind person in all of her public interactions with people. Earlier this week, TLC aired a special about her pregnancy (Meghan and Harry: A Royal Baby Story), and an entire section of the special was solely dedicated to talking about her expensive pregnancy clothes (um, she’s a duchess) and why they were controversial. To really lay it on thick, they had Samantha Markle (who has an obvious history of bias toward her sister) comment on all of the Meghan "controversies." Come on, people. Can she be pregnant in peace?

That’s just one example of negative press surrounding the soon-to-be mother. In reference to the unkindness, King agreed with Winfrey.

"She’s very kind. She doesn’t seem to buy into [her bad press] though," King said.

Winfrey echoed that sentiment, saying, "I think that’s remarkable that despite everything that’s going on she does not read anything."

Winfrey is clearly a big supporter of Meghan, which she made clear at the royal wedding in May. 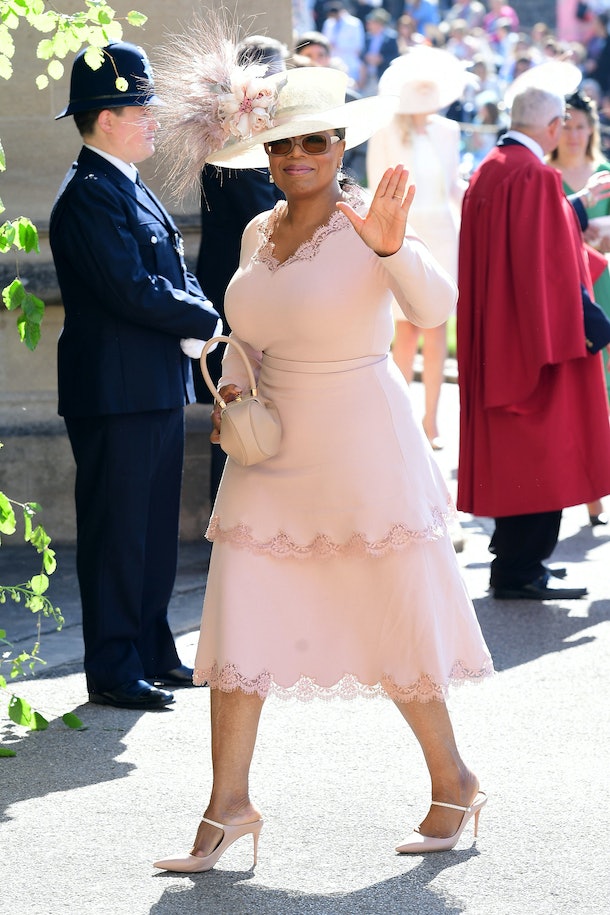 Oprah was getting all the joy that day!

And it’s not just Meghan she’s close with. On Wednesday, April 10, it was announced that Prince Harry and Winfrey are working together to create a documentary series for the new Apple streaming service!

We are excited to announce that The Duke of Sussex and Oprah Winfrey are partners, co-creators and executive producers on their forthcoming mental health series launching on Apple in 2020. The pair have been developing the series for several months and are looking forward to sharing such an important project on this global platform. The dynamic multi-part documentary series will focus on both mental illness and mental wellness, inspiring viewers to have an honest conversation about the challenges each of us faces, and how to equip ourselves with the tools to not simply survive, but to thrive. This commitment builds on The Duke of Sussex’s long-standing work on issues and initiatives regarding mental health, where he has candidly shared personal experience and advocated for those who silently suffer, empowering them to get the help and support they deserve. His Royal Highness has spent many years working with communities throughout the UK and young people across the Commonwealth to break the stigma surrounding mental illness and broaden the conversation of mental wellness to accelerate change for a more compassionate, connected and positive society. Quote from HRH: “I truly believe that good mental health – mental fitness – is the key to powerful leadership, productive communities and a purpose-driven self. It is a huge responsibility to get this right as we bring you the facts, the science and the awareness of a subject that is so relevant during these times. Our hope is that this series will be positive, enlightening and inclusive – sharing global stories of unparalleled human spirit fighting back from the darkest places, and the opportunity for us to understand ourselves and those around us better. I am incredibly proud to be working alongside Oprah on this vital series.”

"We are excited to announce that The Duke of Sussex and Oprah Winfrey are partners, co-creators and executive producers on their forthcoming mental health series launching on Apple in 2020," the caption read. "The pair have been developing the series for several months and are looking forward to sharing such an important project on this global platform."

A quote from Harry about this film venture was also included in the announcement.

“I truly believe that good mental health – mental fitness – is the key to powerful leadership, productive communities and a purpose-driven self," he said.

The Duke of Sussex continued,

Yo, even English royalty refers to Oprah only as Oprah. The power that woman has.

Now listen to the queen and stop being mean to Meghan!!