AN EASTER egg costing just £2 from Lidl is one of the winners in The Sun's blind taste test.

We bravely ate our way through nearly 30 Easter eggs to find which eggs give you the most delicious chocolate for your money – so which ones came out on top? 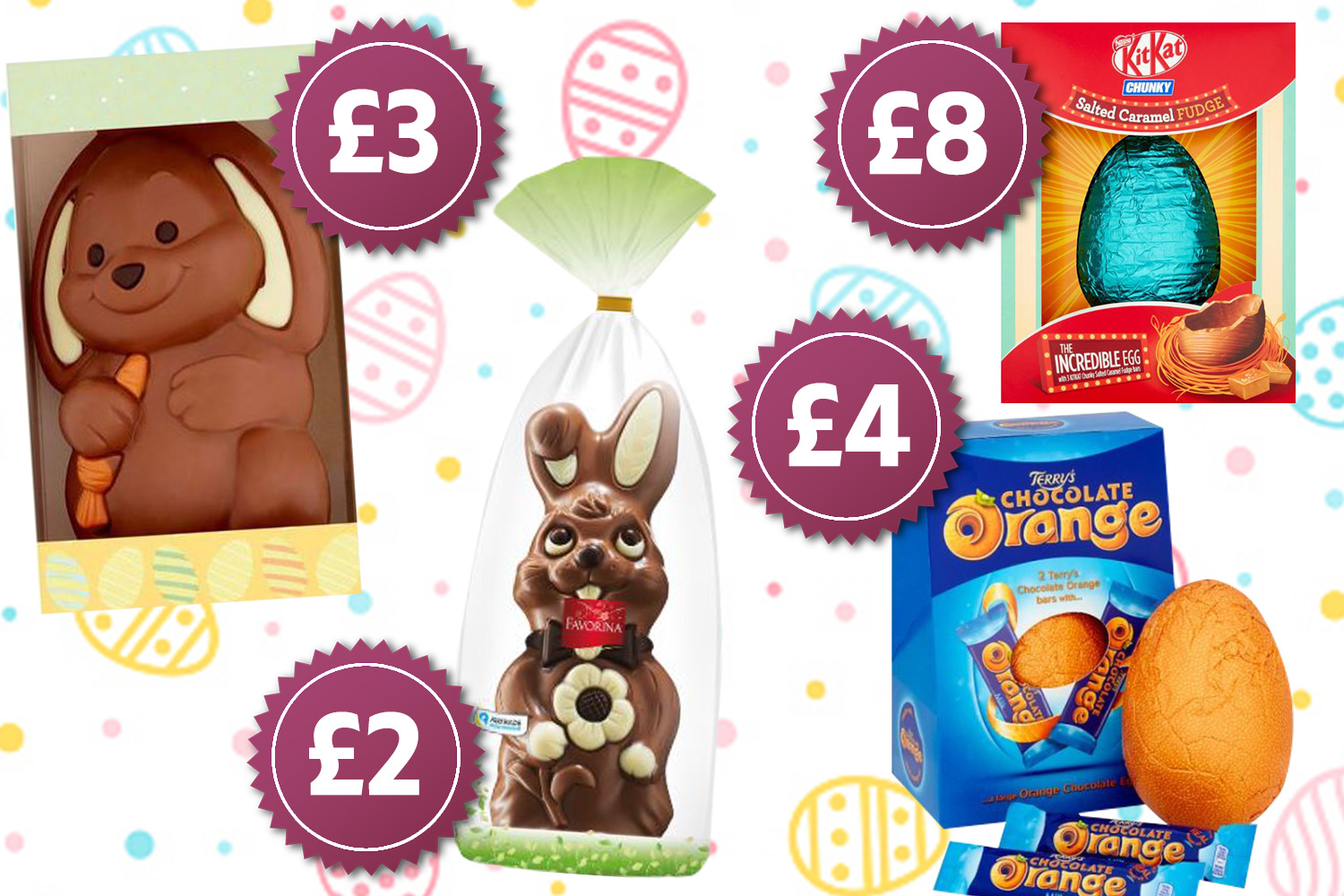 The price of the Easter eggs in our test varied from just 49p up to a huge £27.

But price doesn't necessarily indicate quality, as savvy shoppers know only too well.

So we took on the noble task of trying out randomly selected Easter eggs from Britain's biggest supermarkets as well as the most popular chocolate brands.

We tasted them in batches and separated them into six categories: own-brand, branded, novelty, luxury, £2 or less, and free from.

It was a tough job, but someone had to do it.

There was a tie for the most popular egg overall.

KitKat's Salted Caramel Easter Egg, which costs £8 at Tesco, was a unanimous winner in the luxury category and received the most votes from our team of hungry testers.

Tied for the same number of votes was Lidl's cheap and cheerful £2 Favorina Milk Chocolate Bunny.

The cute character's chocolate was creamy and rich, and tasted much more expensive than it really was.

But which were the other winners – and losers? Find out below. 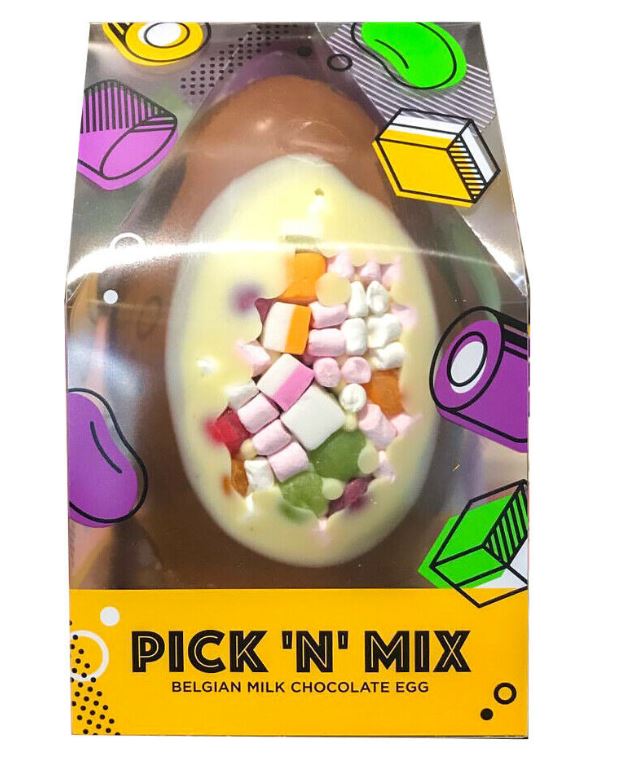 The winner was from Sainsbury's: a milk and white chocolate egg that had pick and mix sweets embedded in the shell.

It was a hit with our tasters, who kept coming back for more.

One told us: "It was like a party in my mouth."

The rest of the eggs came in joint second place, with the same votes each.

None of our panel were bowled over by the other options, and several had quite an artificial taste. 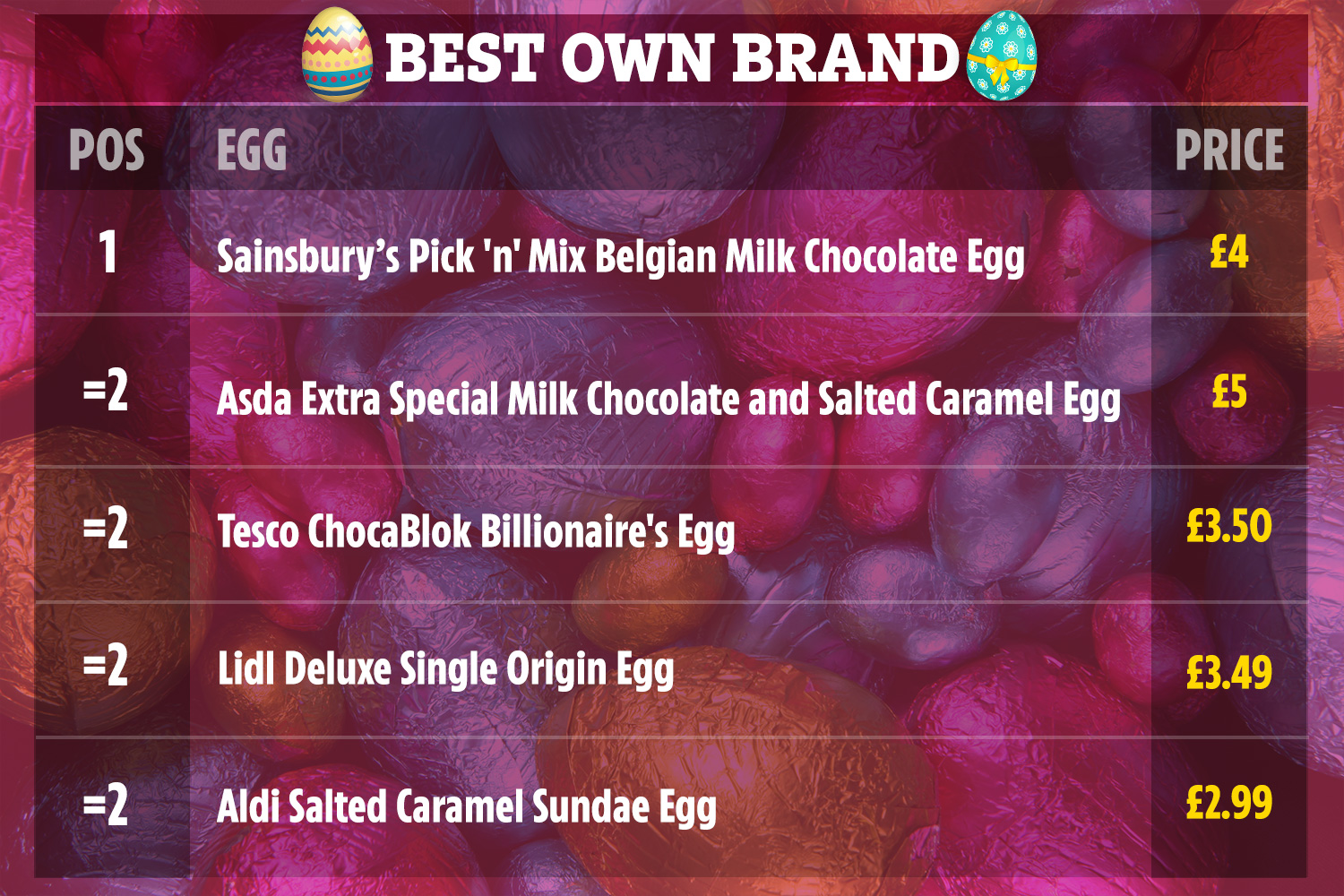 All agreed it was better to spend slightly more on an egg from a brand you love. 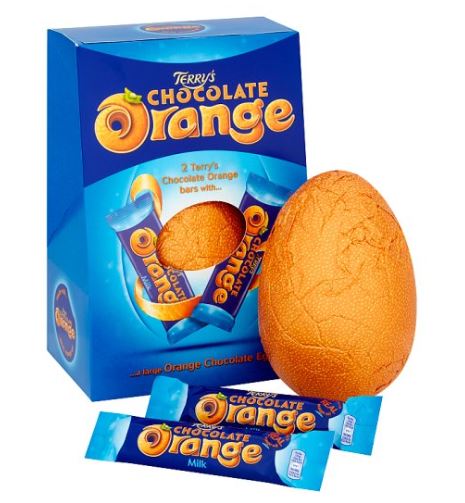 A £4 Terry's Chocolate Orange Easter Egg was the clear winner in the branded eggs category.

It was followed by Lindt's £6 Lindor egg and Bounty's £8 extra-large egg, which both came in joint second place and were firm favourites of our panel too.

But most of the testers said they loved all the eggs and that it was tough to choose a favourite.

Prices for these eggs vary between supermarkets but we've listed the lowest prices we've found for them. 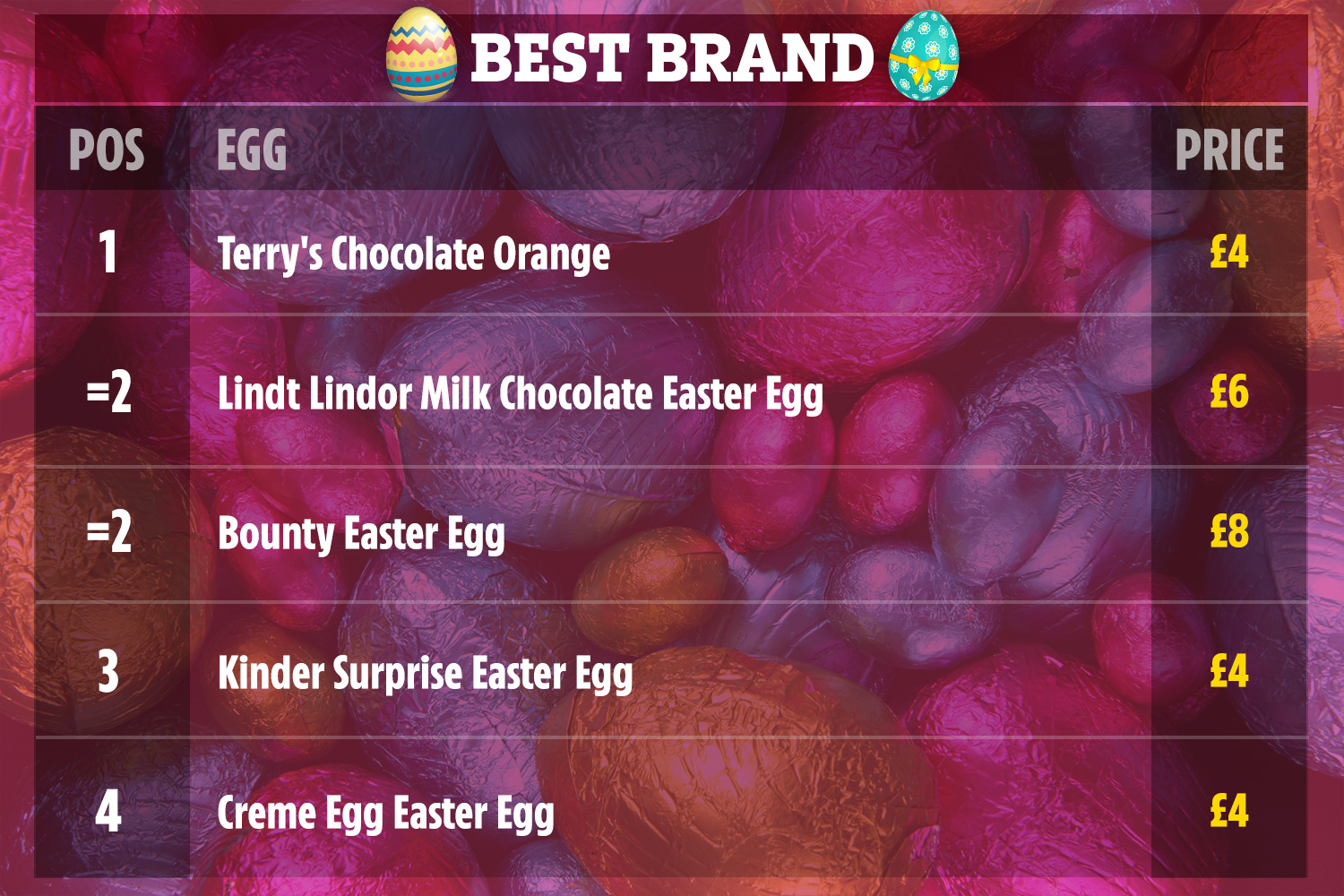 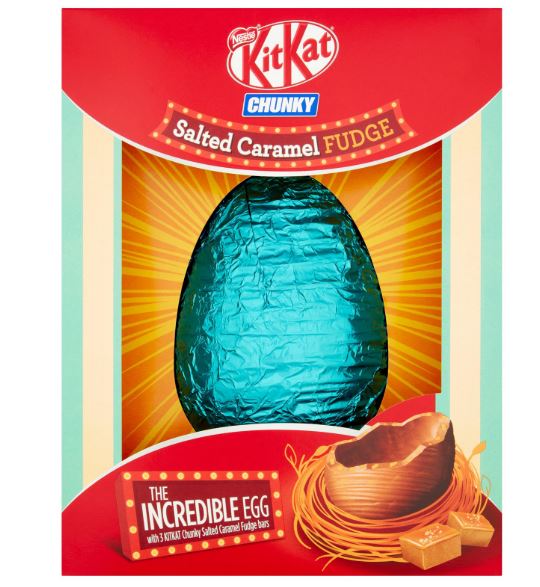 The cheapest luxury egg won this test by a landslide.

The vast majority of the testers voted for KitKat's Salted Caramel Fudge Easter Egg, which is £8 at Tesco.

It won the most votes out of any egg overall too, joint with one other.

One described it as "salty, crunchy and delicious".

Bottom of the pile was Morrisons' £8 The Best Ruby Half Chocolate Egg: a milk and ruby chocolate egg covered in nuts.

Testers said it "tasted of flowers" or "like when you accidentally eat vegetable crisps instead of normal crisps". 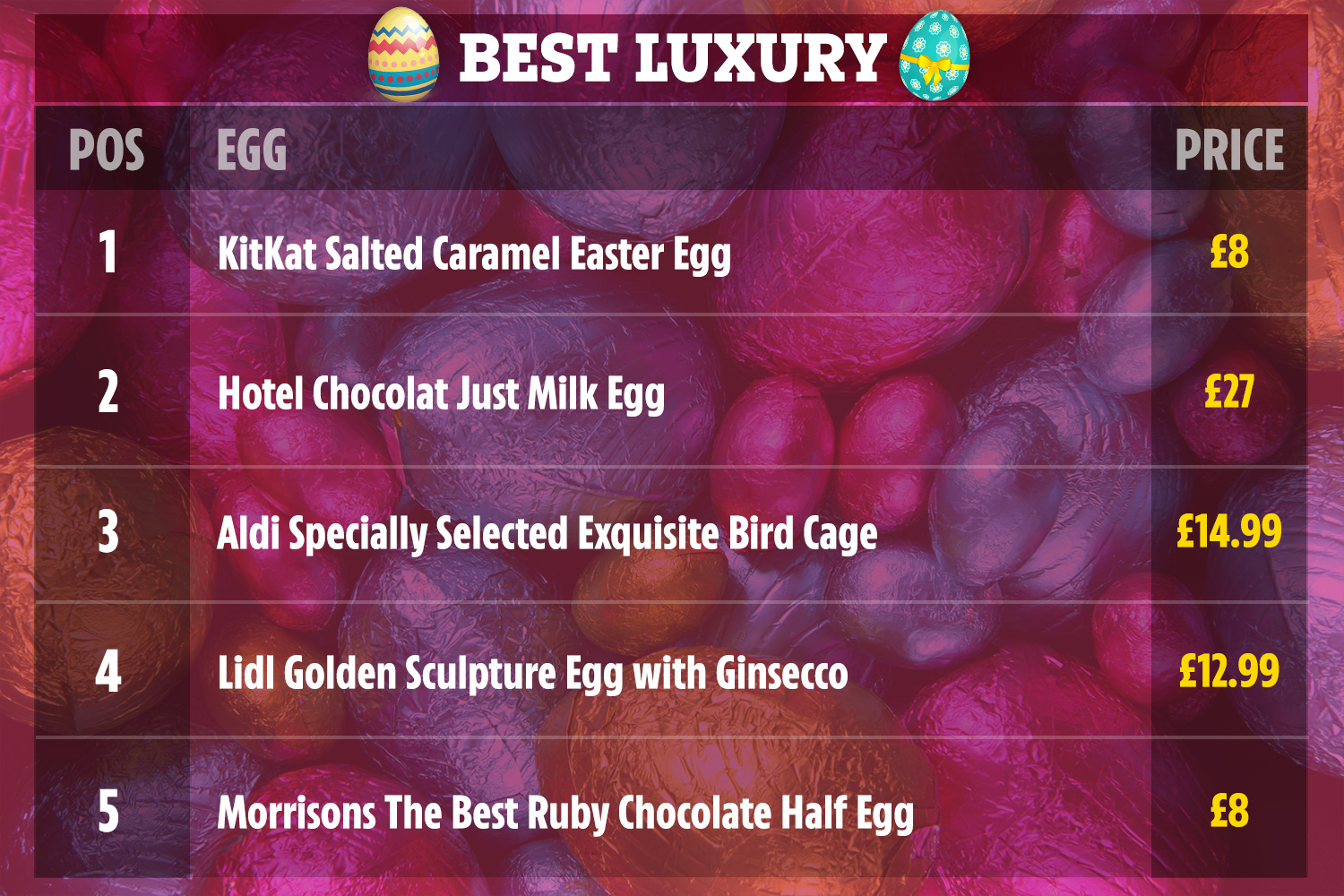 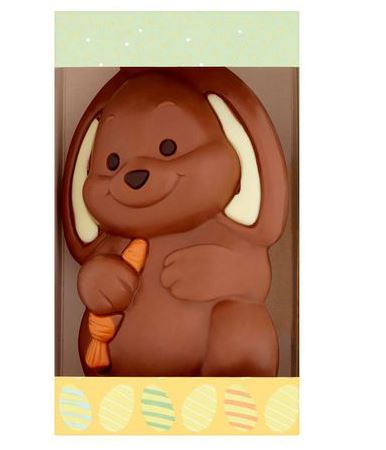 Sainsbury's has won again in the novelty category for its £2.75 ultra-cute Nibbles Milk Chocolate Bunny, despite being one of the cheapest in the whole taste test.

Testers praised the luxurious creamy chocolate – and one even said they'd "consider marrying it".

Some of the comments included "tastes of soy sauce" and "wouldn't even give it to the dog" – ouch! 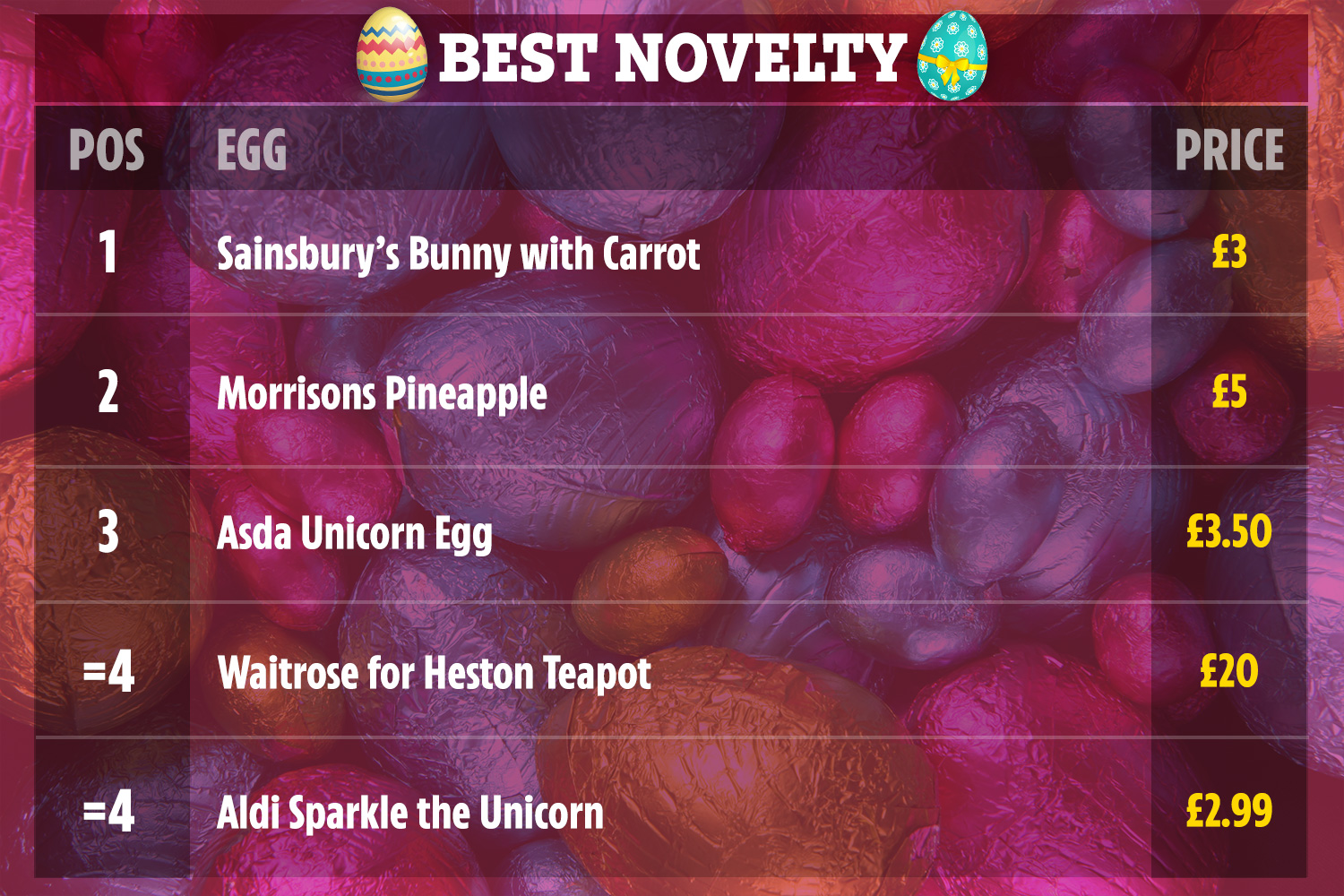 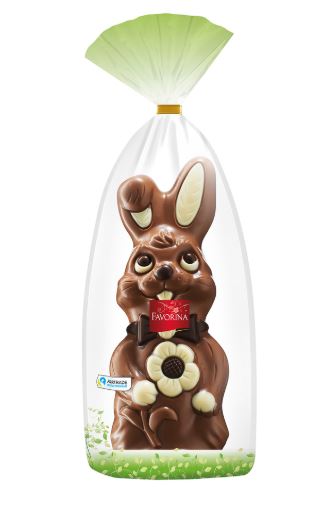 This one was an easy contest.

Lidl's £1.99 Favorina Milk Chocolate Bunny was the clear winner with five times as many votes as the other eggs in the category.

Testers said it tasted like a much more expensive egg and loved the creamy chocolate.

But they also praised Aldi's £1 second-place Hollow Egg with Mini Eggs, which was a few people's favourite.

Bottom of the pile was Kinnerton's £1 Character Egg, which you can buy at Tesco. Testers said they liked but that it tasted like cheap chocolate. 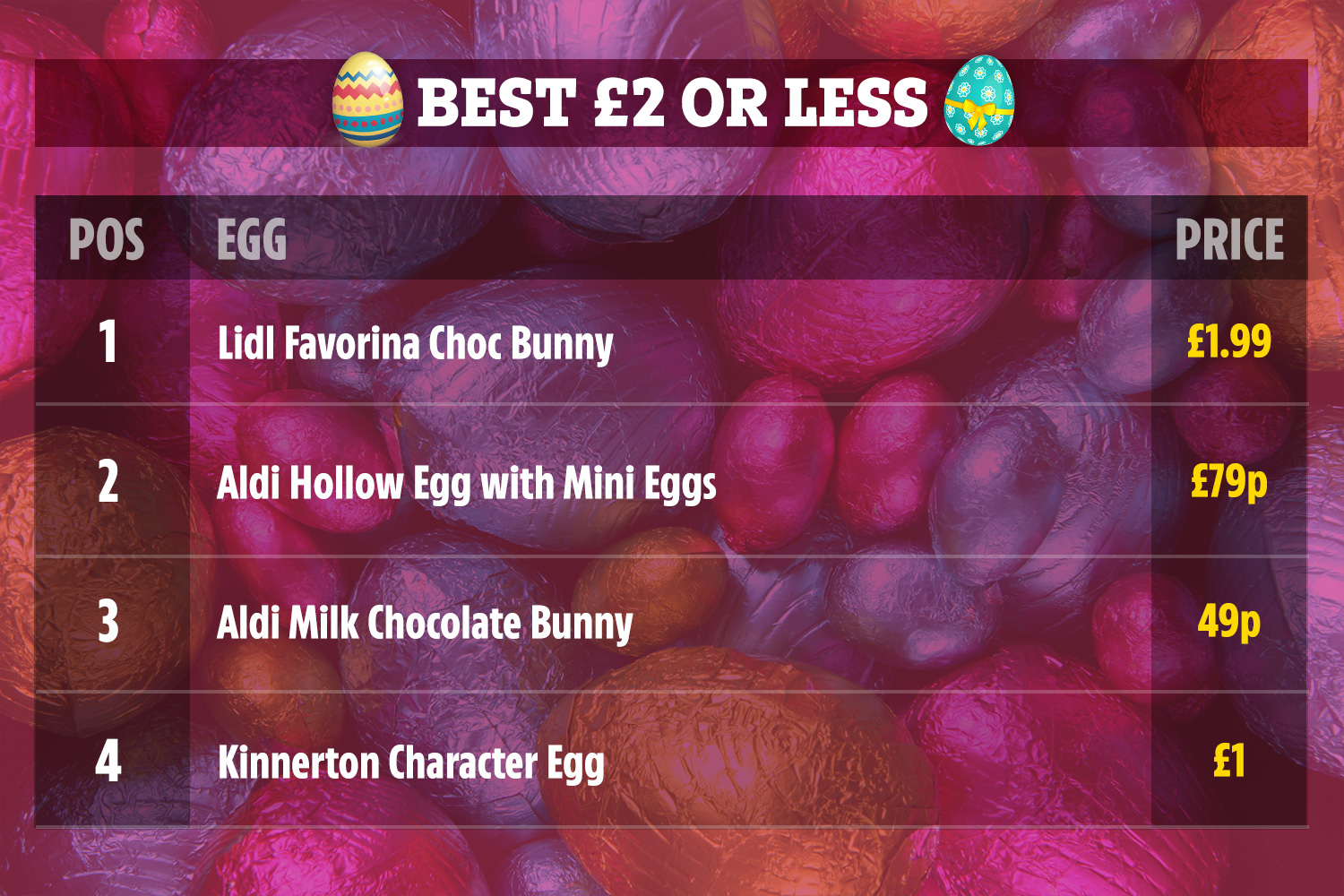 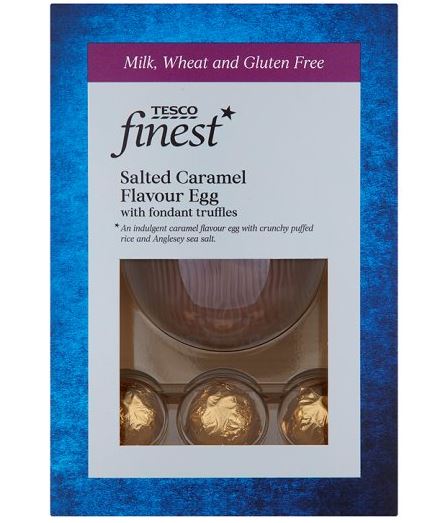 For people with allergies or vegans, Easter can be a tough time.

But there are lots of free-from options around these days, so we tried five from Aldi, Asda, Morrisons, Sainsbury's, and Tesco.

Tesco's £5 Salted Caramel Flavour Egg came out on top, with testers loving the crunchy bits of puffed rice inside the shell.

But our panel didn't really love any of them, and said you could taste the coconut oil used instead of milk in many of the eggs. 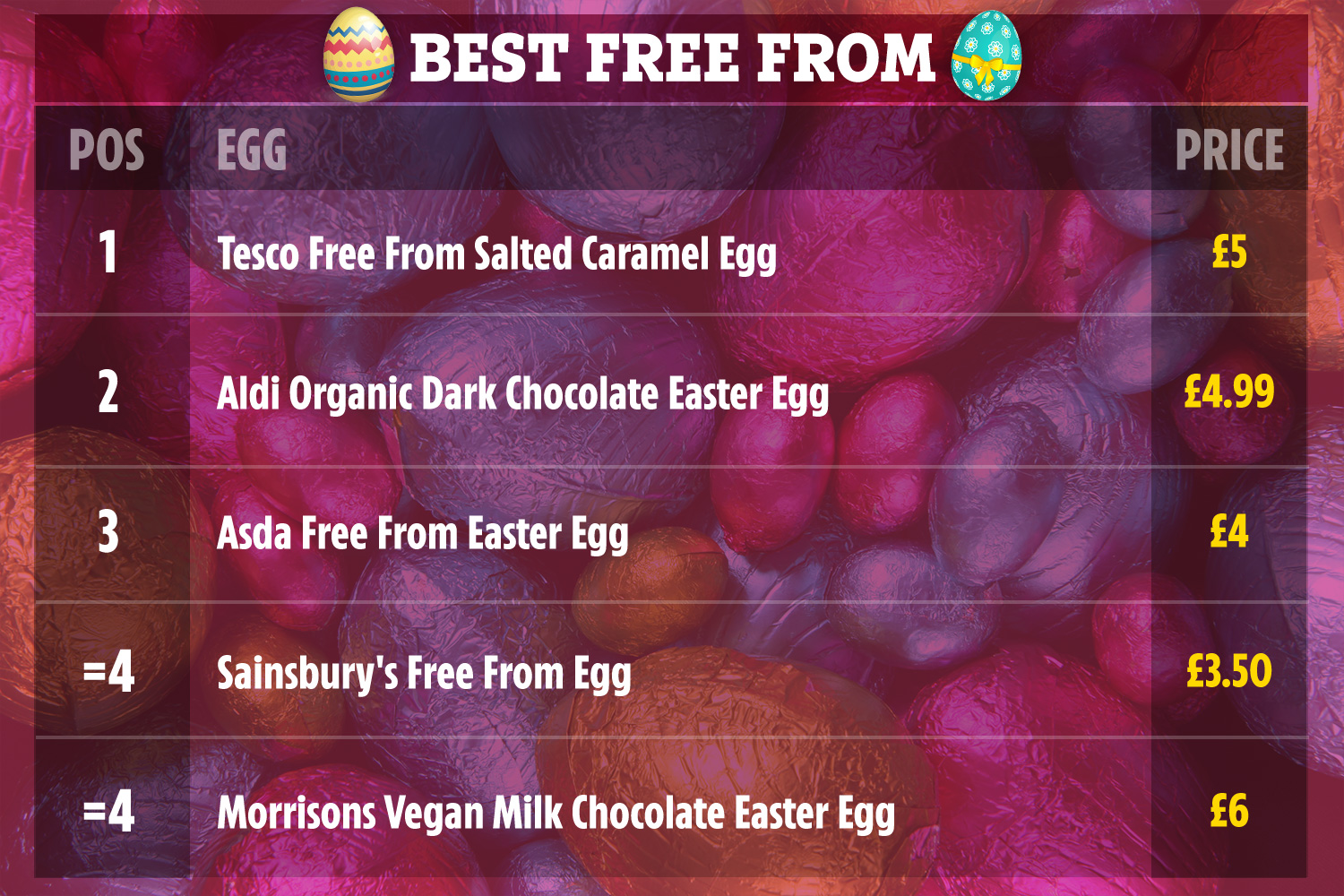 One said Sainsbury's free from egg, which came in joint last place "tasted like sadness".

You can now buy Ferrero Rocher mini eggs in cocoa and hazelnut flavours and they sound delicious.