Owner has splashed £8K on spoiling her pampered dog – including £350 at Christmas and a £300 birthday party – and her patient boyfriend admits it’s far more than she spends on HIM!

A woman has spent £8,000 spoiling her dog in just two years.

Jade McKenna, 24, from Coventry, has treated Gizmo the pug-Jack Russell cross to a £55 personalised bed, a £300 birthday party and lavished him with £250 in gifts on Christmas morning.

The communications manager explains Gizmo is her ‘entire life’ and happily admits that she spends more on her dog than on her boyfriend Chris Allen, 23. 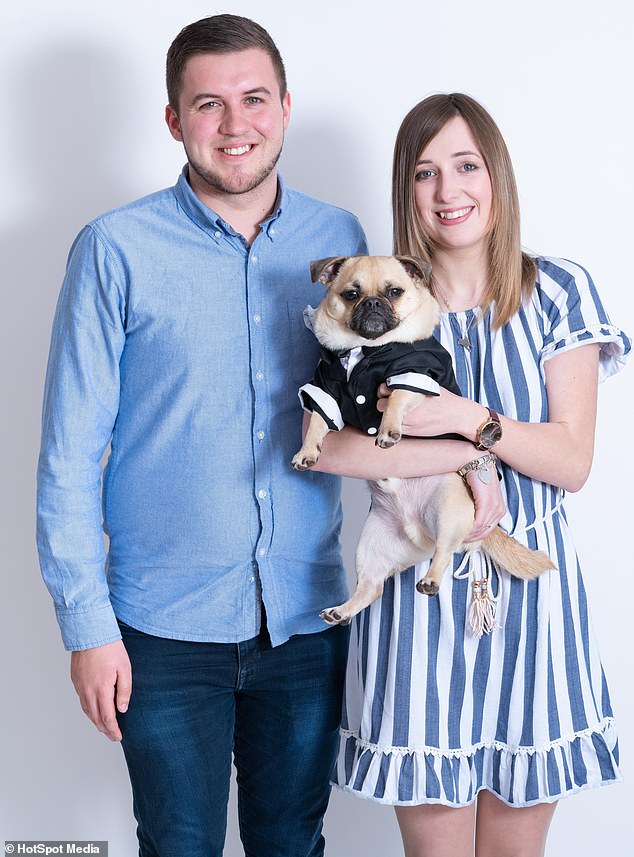 Jade McKenna, 24, from Coventry, revealed she has spent £8,000 on Gizmo, the pug Jack Russell cross, over the last two years – far more than she’s spent on boyfriend Chris, pictured 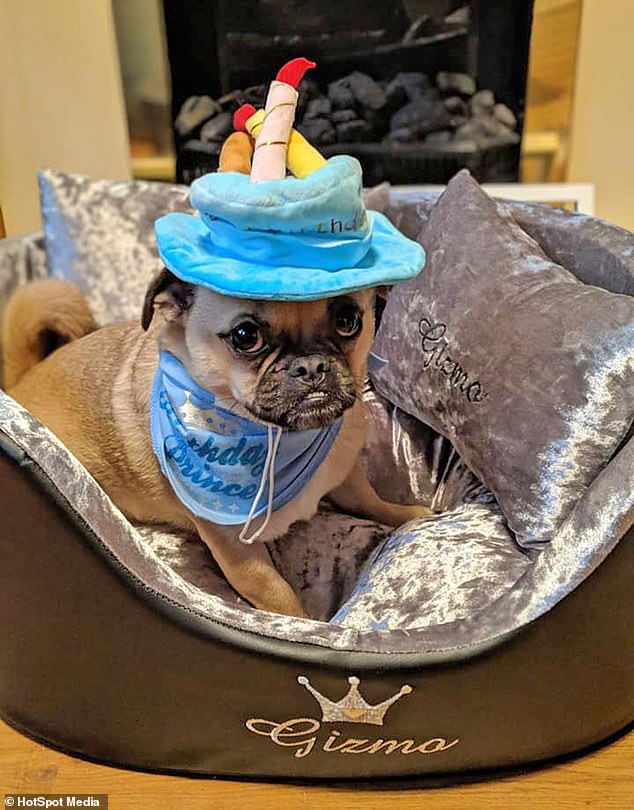 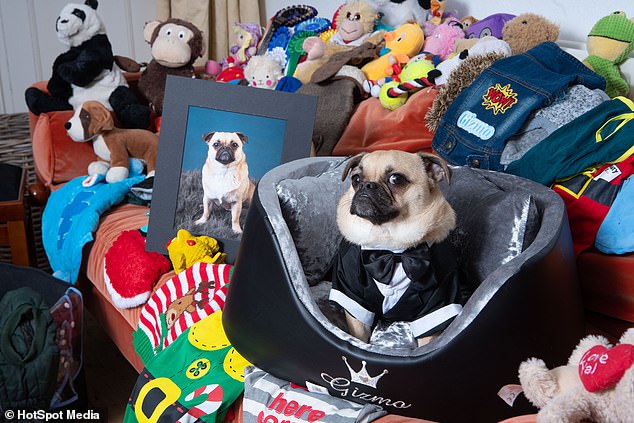 Gizmo looks regal in his little tuxedo. He is surrounded by a selection of toys and costumes

She said: ‘I love to spoil Gizmo because he’s my entire life. He’s my best friend, and he’s worth every penny. My boyfriend Chris thinks I’m crazy, but he understands how much Gizmo means to me.’

Jade bought Gizmo in April 2017 for £650 after falling in love with the flat-nosed breed.

‘I found a pug breeder down the road from our house and when I saw Gizmo, it was love at first sight,’ she said. ‘From day one, he’s been spoilt rotten.’ 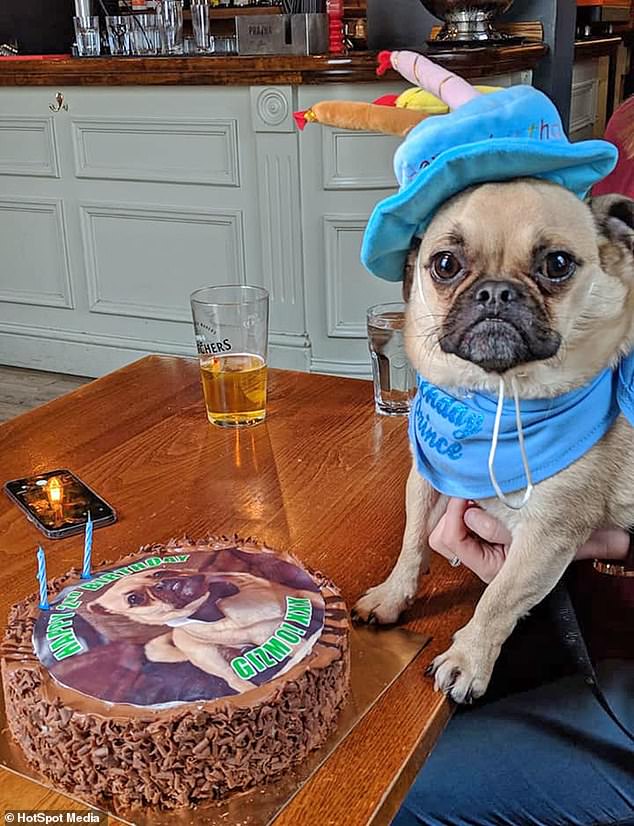 Gizmo was treated to a £300 second birthday party last year, which included a pile of presents and a visit to a dog-friendly restaurant to dine on a personalised cake, pictured 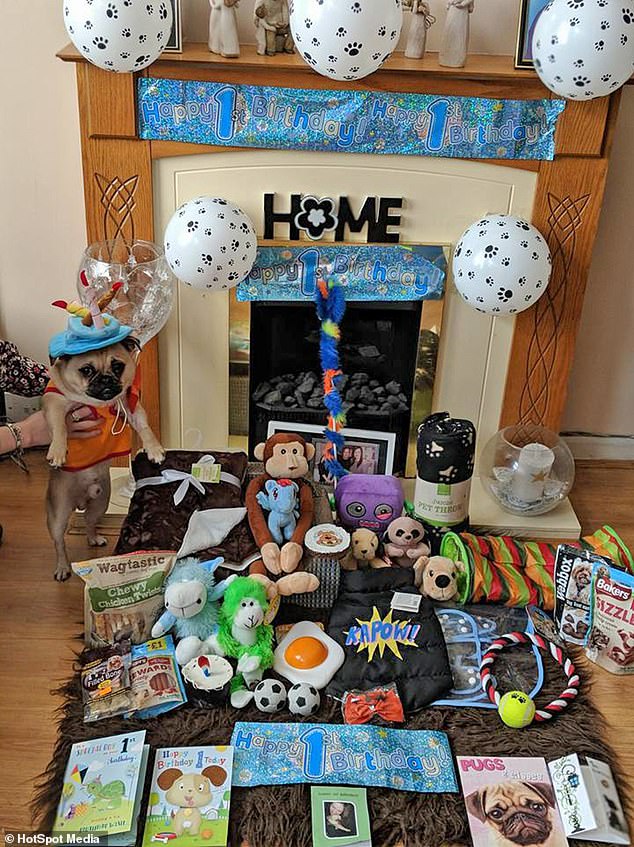 The spoilt pup was lavished with gifts and cards on his first birthday in 2017, pictured. Jade bought Gizmo as a puppy for £650 after falling in love with his flat-nosed face 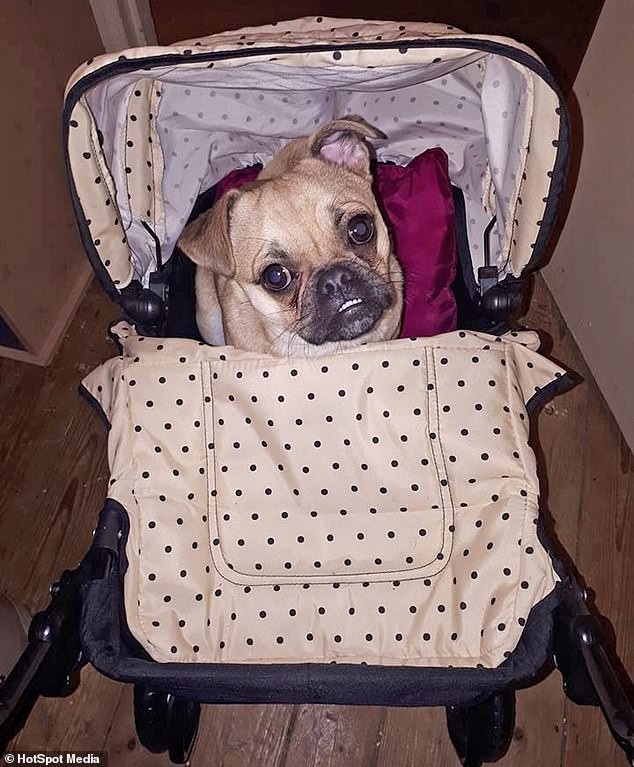 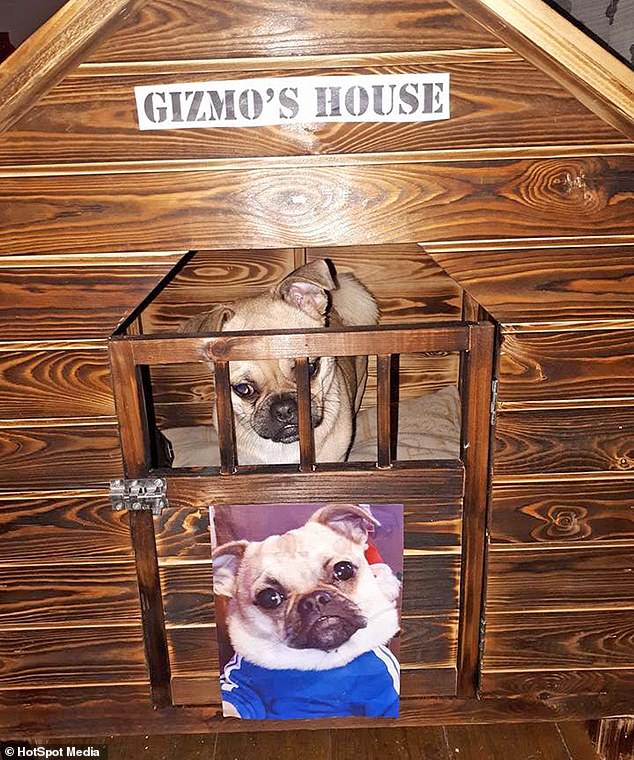 Jade splashed out £55 on a luxury personalised bed, £30 on leads and collars, £100 on treats and £65 on toys. Gizmo also has his own personalised playhouse, pictured 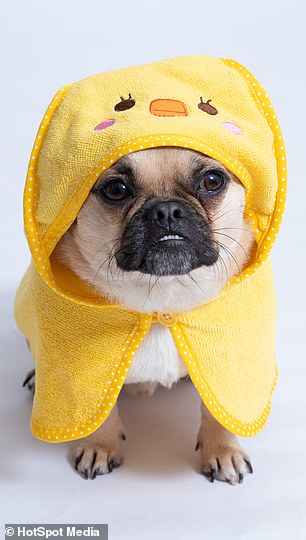 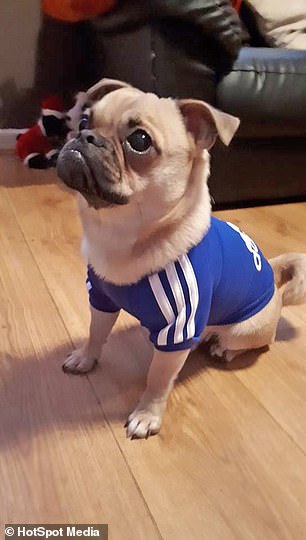 Gizmo the dog loves dressing up, whether it’s as a duck (left) or the latest sportswear (right) 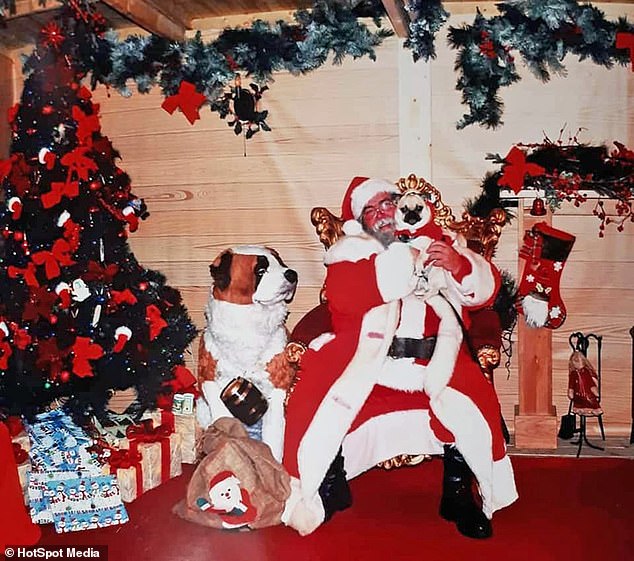 Jade has developed a tradition of bringing Gizmo to Santa’s Grotto for a photo every year. Pictured, the pup dressed in his own red and white suit for his visit in 2017 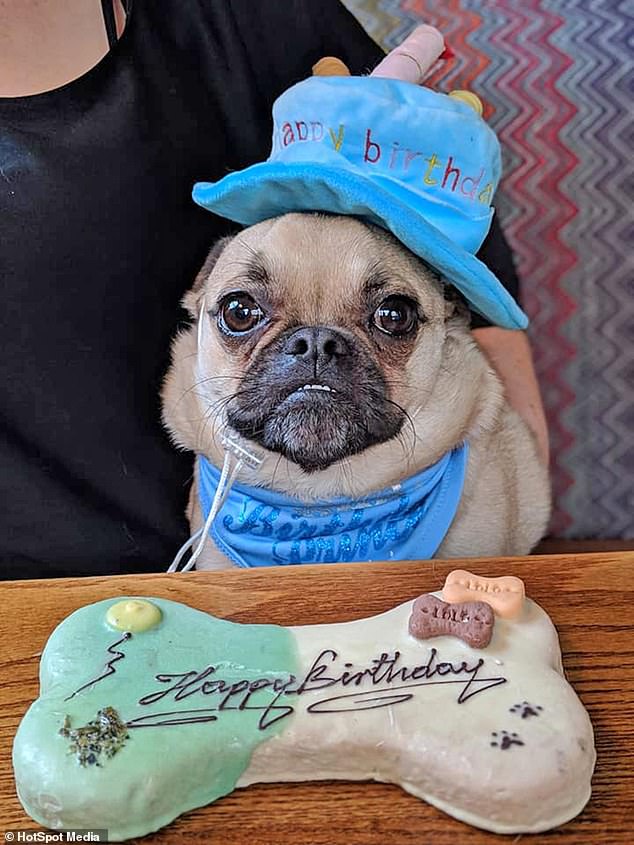 The price of love: How Jade’s spent her money

She continued: ‘All my money goes on spoiling Gizmo. I only spend £50 on myself every month and because I work full time, I can afford it.

‘I don’t go on expensive nights out or pamper myself either. I spend nowhere near as much on Chris as I do on Gimzo, but Chris doesn’t mind.’

Jade’s boyfriend of three years, Chris, said: ‘When Jade got Gizmo, all of her attention suddenly turned towards him.

‘It was a really big change, and I was jealous at the start, as I wasn’t used to it. But now I don’t mind that she spends little on me so she can spoil him.

‘At the end of the day Gizmo makes her happy and that’s all that matters.’

In February 2018, Jade threw Gizmo a surprise second birthday party which cost her almost £300, including gifts. 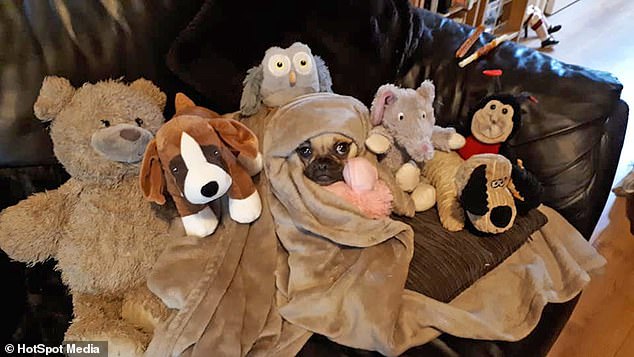 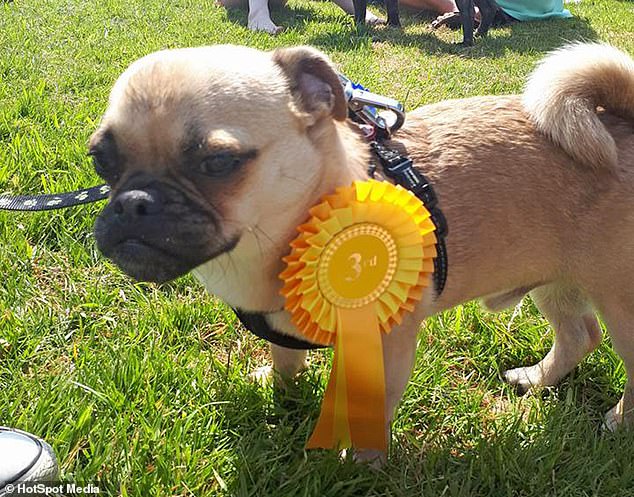 The pampered pup enjoys taking part in doggy pageants like the one above, Jade explained 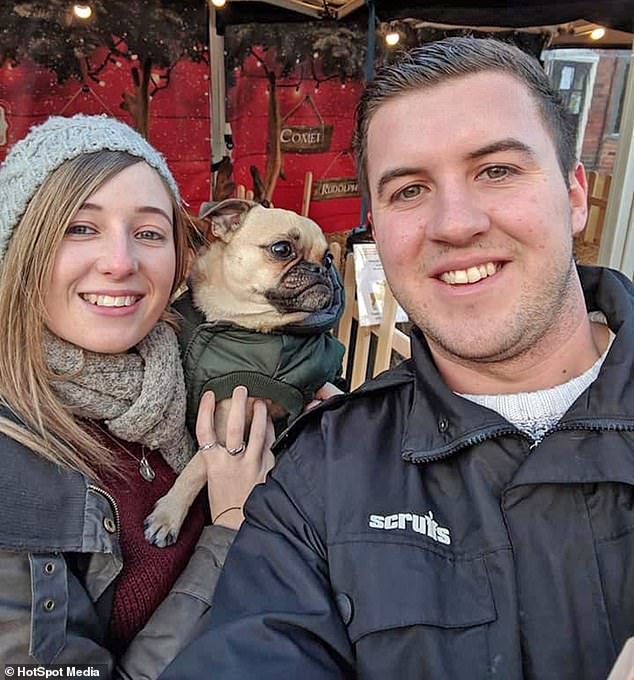 Patient Chris admitted Gizmo is far more spoiled by Jade than he is, but that he doesn’t mind

She decorated her living room with balloons and banners, and bought Gizmo new treats, toys and books.

The dog lover even surprised Gizmo with a personalised birthday cake with his face on.

Afterwards, the family enjoyed a birthday dinner at a nearby restaurant for dogs.

Jade said: ‘I invited all my family round the house to sing him “Happy Birthday”.

‘I treat him as my own baby. Afterwards, Gizmo enjoyed dog beer and a big chicken dinner. It was the most wonderful day and he was so excited.

‘For Chris’ birthday I will buy him a £15 top, a lot less than Gizmo. Chris understands though, he doesn’t get upset because he loves Gizmo too.’ 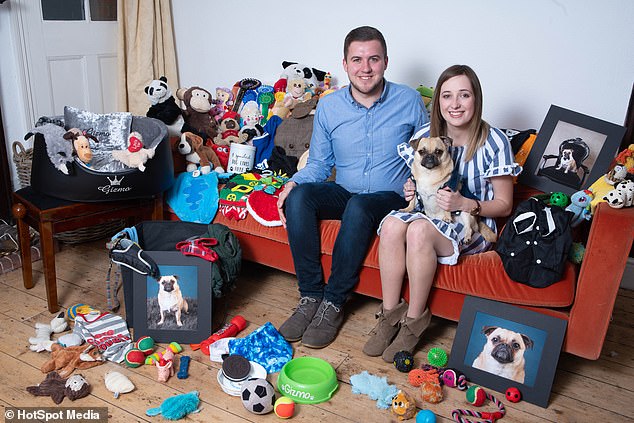 Jade and Chris’ home is full of toys, accessories and photos belonging to pampered Gizmo 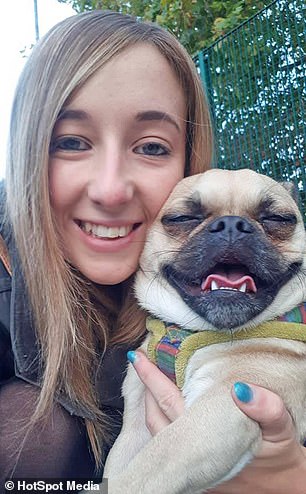 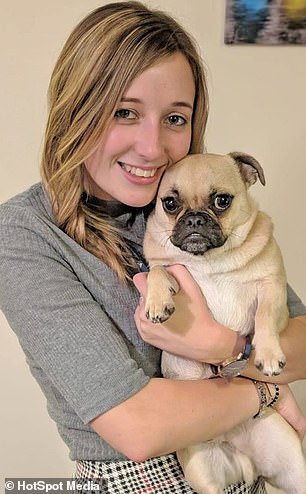 Proud pet owner Jade, 24, poses with Gizmo, who she described as her ‘entire life’

Jade also treats her pooch to days out at the zoo and enters him into dog pageants.

She said: ‘Gizmo loves all the attention, especially when I enter him into doggy pageants and dress him up in cute outfits. He even has his own tuxedo.’

‘Every year I take Gizmo to see Santa Clause, so that he can sit on his lap and have a photo taken,’ she said.

‘I buy him three giant sacks of presents while Chris gets one. I love treating Gizmo and making him feel special.’ 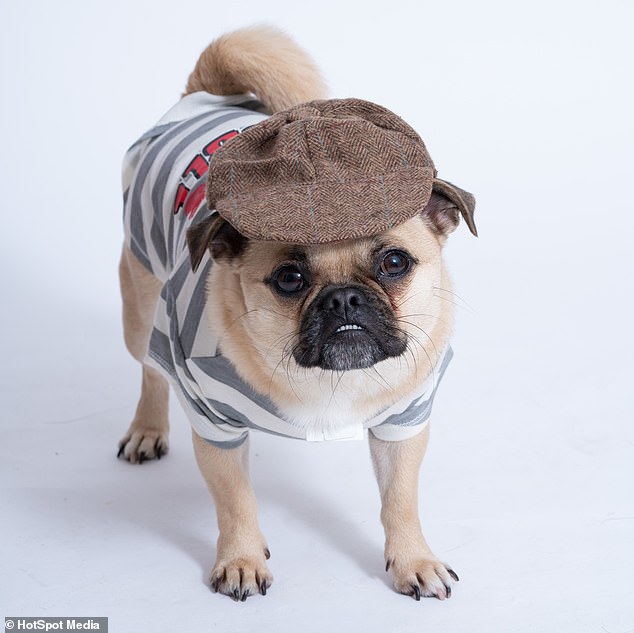 Jade claims she prefers holidaying in the UK rather than going abroad, so Gizmo can tag along.

She said: ‘Normally every year we go on holiday overseas, but this year we are going to Devon so that Gizmo can come too.

‘Chris is fine with it and is happy for Gizmo to be with us. I may spoil Gizmo but he deserves the world. He’s has changed mine and my family’s life and I couldn’t imagine not having him in my life.’