The Victorian government will attempt to repair the state’s battered and stretched health and emergency system, pledging more than $12 billion for health in a headline spend that will include a new hospital in Melbourne’s west and money to train and hire thousands of workers.

After successive waves of COVID-19, Victorian hospitals are seeing a flood of patients whose care has been delayed and distressing accounts are emerging of people who have been unable to get the urgent care they need, when they need it. 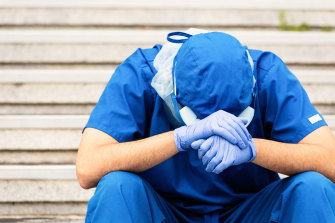 The pandemic has pushed Victoria’s hospital system to the brink.Credit:iStock

Tens of thousands of triple-zero calls are not being answered in time, the elective surgery waiting list is approaching 90,000 and hospitals are overcrowded.

The budget pledges to ease the strain on hospitals and their weary workers, with a promise to train and hire up to 7000 health care workers, mostly nurses, as COVID-19 worsens staff shortages.

A new hospital will be built in Melton, in Melbourne’s outer western suburbs, with up to $1 billion allocated for the project, although a completion date is yet to be announced pending a tender process.

When it opens, the new hospital will include a new 24-hour emergency department, an intensive care unit, along with maternity and mental health services.

Meanwhile, Victoria’s troubled triple-zero service will receive $333 million for nearly 400 new staff, after The Age revealed that 11 adults and four children have died since October after people calling triple-zero were forced to wait up to 15 minutes to connect to an operator.

It is a significant boost to staffing levels, an almost 50 per cent increase to the current workforce of 895 at the essential service, which continues to report ongoing delays of up to seven minutes to reach an ambulance operator.

From late March to late April, more than 6000 ambulance calls faced waits of at least one minute, including almost 1000 that waited four minutes or more.

Other initiatives which attempt to tackle the structural issues facing the health system and the big backlog of deferred care include a plan to free up hospital beds by providing close to $700 million to care for people in their homes. And as previously announced, $1.5 billion is being spent on providing an extra 40,000 elective surgeries to reduce the wait lists that had ballooned out during surgery bans as COVID-19 cases spiked.

Among the 7000 new healthcare workers who will be hired and retrained there are an extra 400 pre-operative nurses and 2000 overseas workers recruited through a “global recruitment drive”.

The $2.9 billion of health infrastructure spending includes about $500 million for the Barwon Women’s and Children’s Hospital in Geelong for new maternity and paediatric services, and $236 million to expand the emergency departments at Casey and Werribee Mercy Hospital.

Regional hospitals will share in $300 million in small to medium grants to fund projects such as theatre renovations and equipment upgrades. As the state boosts its health spend, Premier Daniel Andrews declared this week that he would also be seeking a bigger commitment from the Commonwealth, no matter what happens on May 21.

“Whoever wins the federal election, they will need to deal with these issues,” he said.