Some of Australia’s most prominent marine scientists have rejected Environment Minister Tanya Plibersek’s assertion that Australia has already met its goal of protecting 30 per cent of its oceans, saying industrial fishing and oil and gas extraction are allowed in marine parks that should be set aside for conservation.

At a recent Press Club speech to launch the State of the Environment report, Plibersek pledged Australia would protect 30 per cent of its land and waters by 2030 and said this goal had already been exceeded in the marine realm. 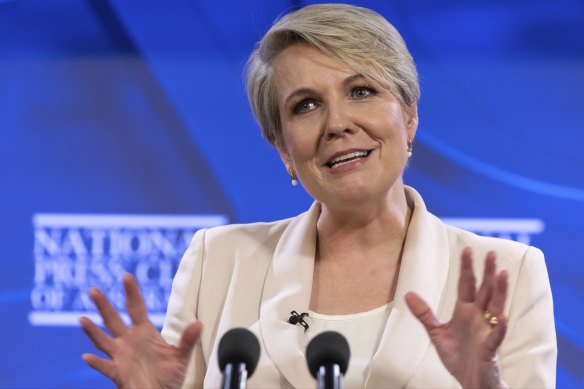 Environment Minister Tanya Plibersek pledged Australia would protect 30 per cent of its land and waters by 2030.Credit:Alex Ellinghausen

But in a letter sent to Plibersek, a group of 23 marine scientists denies this is the case: “This is not the reality using any definition of a protected area other than that of the prior government’s.”

“It’s utterly misleading,” said letter co-signatory Professor Bob Pressey, from the Australian Research Council Centre of Excellence for Coral Reef Studies at James Cook University. “There are two problems with that percentage: the strictly protected areas are placed in areas where nobody is going to fish or extract anyway, and the other protected areas allow people to fish and explore for oil and gas. The 30 per cent is fiction.”

For example, only six square kilometres of the continental shelf and slope in Commonwealth waters from southern Queensland to the Victorian border is a no-fishing marine protection zone, or 0.01 per cent of the total area.

In a statement, Plibersek said that following the recent creation of new fully protected marine parks in our Indian Ocean Territories, 45 per cent of Australia’s Exclusive Economic Zone is now covered by marine parks.

“I welcome and look forward to receiving full and considered contributions to these public consultations from marine science experts and other key stakeholders,” Plibersek said.

Plibersek said the government had committed to carry out a statutory review process of Australia’s national marine parks networks, with any changes based on science and stakeholder consultation. “I also recognise the role that sustainable marine industries can play in park management,” she said.

The scientists say these “parks only on paper” have no detectable ecological difference from nearby fished areas and deceive the public by suggesting a positive environmental outcome but achieving little or nothing for conservation. Only nine per cent of Commonwealth waters and nine per cent of state waters are currently protected in no-fishing zones, and these values have declined from 2016 to 2020.

Most other countries use the internationally recognised International Union for the Conservation of Nature (IUCN) definitions of marine protected areas, which explicitly exclude industrial fishing.

“The system has been tweaked to the point where the areas where conservation is most needed, have nothing in place,” says letter co-signatory Professor Graham Edgar, from the University of Tasmania. “The marine park network, although it’s large, it’s been designed in a way that protects places that hold the least value for conservation.”

The many pressures on Australia’s coastal environment appear to be worsening, and invasive species are an ongoing and pervasive threat to coastal ecosystems, although nutrient pollution appears to be lessening in response to proper management, the State of the Environment report found.

The group of scientists is calling on Plibersek to implement a marine park network that would fully protect 30 per cent of Australia’s jurisdiction, including at least 10 per cent of ecosystem types in each bioregion around Australia.

Get to the heart of what’s happening with climate change and the environment. Our fortnightly Environment newsletter brings you the news, the issues and the solutions. Sign up here.