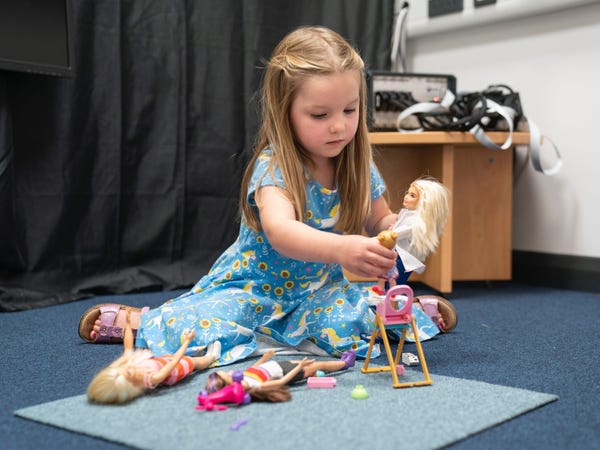 Playing with dolls could help children learn to be empathetic and social, skills that are particularly important to hone now while many children are still learning remotely and have limited access to friends.

In a study commissioned by Mattel, the maker of Barbie, researchers from Cardiff University's Centre for Human Developmental Science observed 42 boys and girls between the ages of four and eight while they played with Barbie dolls, both with other children and on their own. The children were also observed while they played games on a tablet, on their own and with others.

During the sessions, the children wore a device, which fit like a swim cap, and allowed the researchers to measure the children's brain activity.

While playing with a diverse range of dolls and playsets, the researchers found a part of the brain called the posterior superior temporal sulcus was activated in the children, both when they played with Barbie dolls solo and in groups. This part of the brain is associated with social information processing, such as empathy.

While playing with Barbie dolls, a part of the brain associated with empathy is activated in children

The posterior superior temporal sulcus was activated "far less" when the children played the tablet games alone, even games that had creative elements, the researchers, who published their findings on Thursday in the journal Frontiers in Human Neuroscience, found.

"What's really exciting about this is that doll play has benefits and they're not about pairing necessarily," said Sarah Gerson, a developmental neuroscientist and senior lecturer at Cardiff University who oversaw the study. "They are about these social skills that are important for a variety of really broad domains."

Dolls play is able to elicit this type of effect because dolls "naturally encourage children to create their own social worlds," Gerson told Insider. So, even while playing with dolls on their own, children might recreate situations from their lives or create their own scenarios to act out and resolve.

Empathy plays a key role in children's social interactions. But these moments also enable children to "practice" for situations in the future where empathy comes into play. That may include negotiating in professional situations, running a business, and resolving conflicts, Gerson added.

Gerson and her team started their research over a year ago, long before the pandemic hit. She said that the results have been published at an opportune time, when many children are still isolated from friends and family, and parents are growing increasingly concerned about how this might impact their social skills down the line.

"It's especially relevant right now, particularly because kids might be missing out on their social interaction that they'd normally be getting," Gerson said. "It's even more relevant than we expected in some ways."