Verve is an appropriate umbrella title for this Australian Ballet triple bill. It has plenty of vigour and enthusiasm. Is it too much to wish there was also electricity in these technically top quality performances? A tough ask, perhaps, but these excellent dancers are so close to being thrilling, it’s frustrating not to see them take that extra theatrical step.

All three works were made for the Australian Ballet by former or current members of the company, reflecting its commitment to creativity.

The most interesting piece is Aurum, choreographed in 2018 by Alice Topp, an AB dancer who has been moving up the creative ladder in the past few years.

The title means gold in Latin and refers to the Chinese approach to mending broken ceramics with gold or metallic lacquer in a way that becomes part of the history of the object. She applies this to humans, illustrating frailties in character and relationships that prompt unusually warm and compassionate performances. 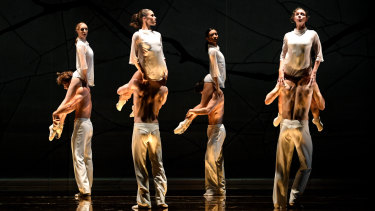 On opening night, outstanding dance and interpretive partnerships came from Adam Bull and Coco Mathieson, Kevin Jackson and Robyn Hendricks. They were admirably supported by eight dancers performing choreography that surprises and delights the audience as it challenges the dancers in inventive ensembles. Ludovico Einaudi’s music and Jon Buswell’s stage and lighting designs complement the whole. No wonder the AB is taking Aurum to New York next month.

Constant Variants (2007) illustrates choreographer Stephen Baynes’ great qualities of elegance, subtlety and classically driven modernity. The performance by its eight dancers came closest to thrilling, with some exquisite moments in the trio with Ako Kondo, Andrew Killian and Cristiano Martino, and the duet danced by Yuumi Yamada and the fleet-footed Lucien Xu.

Michael Pearce’s distinguished set design, bold but restrained, makes an important contribution to the flow of the piece, as does Jon Buswell’s lighting. And at its foundation is Tchaikovsky’s beautiful Variations on a Rococo Theme, played by the Opera Australia Orchestra.

Filigree and Shadow (2015) has Tim Harbour’s 12 dancers hurtling around in a short work inspired, at least in part, by birds caught in a cyclone. It is impressive for its dynamics and the driving energy of the performers to a colourful electronic score by 48nord (Ulrich Muller and Siegfried Rossert). But despite the efforts of the dancers, and the handsome design and lighting by Kelvin Ho and Benjamin Cisterne respectively, the dance itself seems empty and shapeless overall – lots of action yet no tension.