Prime Minister Scott Morrison has distanced his government from the fiasco involving Australia Post boss Christine Holgate’s messy exit from the company, describing her decision to leave as a matter of public record.

Ms Holgate broke her silence on the matter on Tuesday, labelling Australia Post chair Lucio Di Bartolomeo a liar who forced her out of her job last year amid a political uproar over her decision to reward four senior employees with Cartier watches totalling $20,000 in 2018. 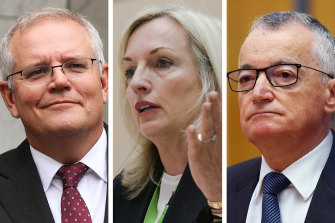 In a submission to a Senate inquiry scrutinising her exit, Ms Holgate accused Mr Morrison of humiliating her in the Parliament on October 22 when he denounced her actions and called for her “to go” if she refused to stand aside during a four-week investigation into the watches purchase.

Addressing her criticisms on Wednesday, Mr Morrison said Ms Holgate had resigned from Australia Post of her own accord and the ongoing dispute around her exit was “a matter now that’s substantively between Ms Holgate and Australia Post”.

Ms Holgate and Mr Di Bartolomeo are expected to give evidence at a public hearing on Tuesday, after Labor backed a One Nation bid for an inquiry into the circumstances surrounding her departure.

Ms Holgate quit as chief executive of the postal service on November 2, 10 days after revealing to a Senate estimates hearing on October 22 that she had purchased the watches as a reward for the employees’ work landing a $220 million deal with three of the big banks. In her Senate submission, Ms Holgate accused Mr Di Bartolomeo of repeatedly lying in public statements claiming she had agreed to stand aside as chief executive pending the investigation, insisting she only agreed to take annual leave.

But Australia Post denied this claim in its Senate submission, saying “Ms Holgate initially resisted the request to stand aside”, but ultimately agreed to do so during conversations with Mr Di Bartolomeo over the course of the afternoon of October 22.

The company said the request followed a conversation between Communications Minister Paul Fletcher and Mr Di Bartolomeo earlier that day, in which he asked the chairman “to inform Ms Holgate that she would be asked to stand aside during the investigation”.

Australia Post acknowledged the conversations between Mr Di Bartolomeo and Ms Holgate included discussions about her taking annual leave, noting: “The chair queried why Ms Holgate would take annual leave, given she would be paid her full entitlements (without reducing her annual leave balance) if she stood aside”.

Australia Post said Ms Holgate raised no concerns when it emailed her a statement that evening announcing that she would stand aside. The company said it first learnt of her complaint when it received a letter from Ms Holgate’s lawyers days later asserting she had not agreed to do so. 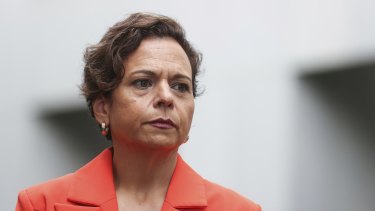 The federal opposition seized on Ms Holgate’s claims on Wednesday to accuse the Australia Post board of bowing to government pressure.

“Everybody knows that if Scott Morrison and Paul Fletcher did not want Ms Holgate gone, the chairman and board would have acted differently. Scott Morrison effectively sacked Ms Holgate on the floor of Parliament, and within two hours launched a government-funded investigation led by the Maddocks law firm,” Labor communications spokeswoman Michelle Rowland said.

The comments mark a change in Labor’s position on the issue since October when Ms Rowland slammed the purchase of the watches as “unacceptable”.

“Australia Post is a cherished national institution and it must set a high standard. Today’s evidence that $12,000 was used on luxury watches does not meet that test,” Ms Rowland said on October 22, before it was clarified the actual cost was $20,000.

The Communications, Electrical and Plumbers Union, which represents postal workers, threw its support behind Ms Holgate, saying she had a “right to return to her position as CEO of Australia Post” while the inquiry examined whether due process had been followed.