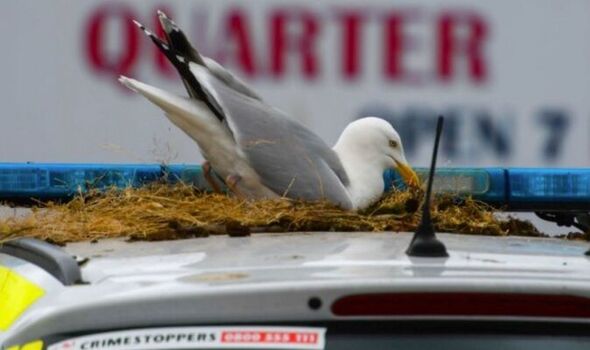 Officers were left speechless when they realised the protected birds decided to build their new home on top of an operational car. A clump of twigs and branches was carried and carefully placed together on the patrol car. And while the birds did nothing wrong in choosing a place to house their family, the police officers were left puzzled.

They soon came to the conclusion that they are left with no other choice but to put the car out of action.

The nest cannot be destroyed as seagulls are protected species and pulling down the nest would be illegal under the Wildlife and Countryside Act 1981.

So, instead of demolishing the animals’ loving shelter, officers are now protecting it in every way possible.

The car parked in its place and coned off in order to keep members of the public away from it.

The migratory birds, often hit with the bad reputation of being chip thieves, are a traditional part of seaside environments.

However, their increasing presence in urban areas is concerning the Royal Society for the Protection of Birds (RSPB).

All species of gull are protected under the Wildlife and Countryside Act 1981 and the Wildlife (Northern Ireland) Order 1985.

Therefore, it is illegal to injure or kill any gull or damage or destroy an active nest or its contents.

On its website, the RSPB provides advice on how to deal with the protected species if they are intruding on your property in search of accommodation.

But the organisation stresses that it is important to prevent and discourage the birds from nesting in places where they could obstruct human activities.

RSPB says: “We believe the best approach to understanding urban gull populations starts with comprehensive research to establish these basics, followed by development of effective deterrent methods for use in situations where gulls are causing problems.

DON’T MISS: UK’s LONELIEST pup is waiting for new home for more than a YEAR
Heart-melting video of puppy crushed by debris rescued in Ukraine
Watch kangaroos rescued by a volunteer from a shelled Ukrainian zoo

“These could include reducing the organic waste taken to landfill sites and, in towns, preventing street littering, and making public waste bins, domestic and business waste containers and collection arrangements ‘gull-proof’.

“Those best placed to do this include landfill companies, local authorities and statutory bodies with a wildlife management remit, but the behaviour of private individuals is also important.”

In the case of the birds nesting on the patrol car, an RSPB spokesman said they were reassured that the birds will be safe while under police protection.