With a federal election possible as early as spring this year, the political pressure points are becoming clearer. None more so than on the industrial relations front. It should hardly be surprising – for decades it has proven a rich source of scare campaigns on both sides of the political aisle. Apart from the politics, it’s an area of community concern and importance.

With the Coalition’s latest proposed changes before parliament, drafted after a six-month consultation process that brought together employer and employee representatives, and Labor  releasing its own policy a week ago, the Coalition and Labor are wrestling over industrial relations. 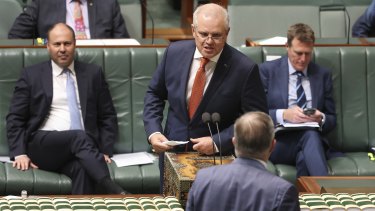 The Morrison government is shaping up for a fight with Anthony Albanese’s Labor opposition over industrial reforms. Credit:Alex Ellinghausen

The politics are never subtle. Labor, with the backing of the unions, is bent on playing up the Coalition’s proposal as an attack on workers’ wages and conditions, while the Coalition has claimed Labor’s policy would cripple businesses. It should be unsurprising that the truth is never so neat.

The Coalition’s bill certainly has some red flags, most notably its proposal to give companies two years to negotiate agreements that can pay below industry minimums if employees vote in favour of it and the industrial commission approves, taking into account the coronavirus and public interest.

At a time when wages growth has been stagnating for years, and increased unemployment will only add to that downward pressure, the potential for even lower pay packets has little merit socially or economically. It would appear there is little crossbencher support to pass the bill with that aspect included.

But the Coalition’s bill is not all bad news for workers. It would introduce higher sanctions for employers who underpay staff, including criminal penalties of up to four years in jail and $5.5 million fines. It also includes a new small claims process that would enable the Fair Work Commission to resolve payment disputes quicker.

On the Labor side, they are offering a raft of changes long sought by unions, including a proposal to let contractors who move between jobs take annual and sick leave with them, which could be expanded to casuals. Employers will also be forced to offer permanent work to any staff member after two years or two fixed-term contracts in the same job.

As expected, most industry groups are opposing Labor’s proposals. The Australian Industry Group claims they would “reduce jobs and investment” and the Australian Chamber of Commerce and Industry said it would “kill off casual employment”.

In political terms, Labor may have the upper hand. With the backing of the union movement, which needs the campaign to stay relevant and slow the decline of its membership, it has an enormous amount of resources to mount a long campaign. Meanwhile, while the Coalition is still hamstrung by the long shadow of WorksChoices, the hardline IR laws introduced by former prime minister John Howard, it still has the opportunity to re-prosecute the argument that Labor will cost business billions and is beholden to the unions.

Regrettably, it would seem continuing conflict serves a greater political purpose for each side than finding common ground. That is a problem with real consequences for workers and businesses alike.

Sluggish wage growth, overly complex work agreements, a growing army of people in insecure work, underpayment of staff and lack of flexibility are just the most obvious issues that could benefit from sensible industrial relations reform. Using the issue as a political battering ram during the election is not going to help anyone. Surely it’s time for politics to take a back seat to a real effort to find compromise in this crucial policy area.

Note from the Editor

The Age’s editor, Gay Alcorn, writes an exclusive newsletter for subscribers on the week’s most important stories and issues. Sign up here to receive it every Friday.