RICHARD LITTLEJOHN: The Prime Minister’s deranged dashes from Westminster to Europe have been like Fifty Shades of May

The last time I saw her looking that cheerful in the Commons was during Spread Fear Phil’s disastrous 2017 Spring Budget speech. She did a passable impersonation of the Meg Ryan restaurant scene in When Harry Met Sally.

As I watched this week’s slow-motion car crash unfold, I couldn’t help thinking: what on earth has she got to laugh about?

Her dismal Brexit ‘deal’ lay in rags at her feet and a few hours later she would face a no-confidence motion from her own MPs.

In order to win the support of the 1922 Committee, she had to abase herself before Conservative backbenchers, by promising that she wouldn’t lead the party into the next General Election.

Why was she bothering? And why, not for the first time, did I recall what Detective Constable Jones said to Cheerful Charlie Chisholm, in one of the two classic Minder episodes featuring Scotch Harry? 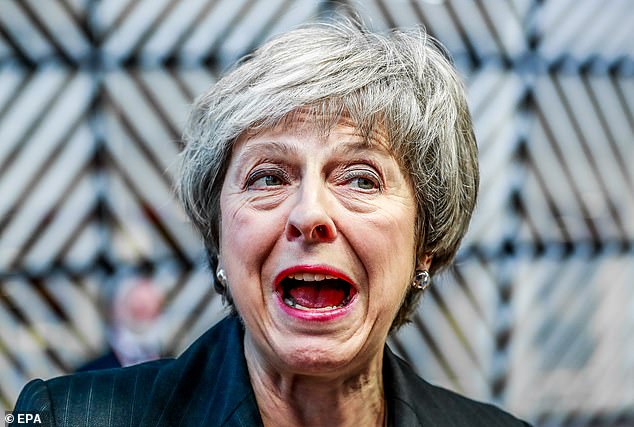 RICHARD LITTLEJOHN: As I watched this week’s slow-motion car crash unfold, I couldn’t help thinking: what on earth has she got to laugh about?

After yet another abortive attempt to nick Arthur Daley, an exasperated Jones turns to Chisholm and pleads: ‘All I’m saying is this: Who bloody cares?’

Funnily enough, I decided to watch this episode again on Wednesday night, rather than suffer the self-serving gabfest at Westminster in the run-up to the announcement of the no-confidence motion result.

You can just imagine a version of this conversation taking place in No 10 between Mrs May and her ever-loyal husband. ‘All I’m saying, Theresa, darling, is this: Who bloody cares?’

But instead of throwing in the towel, Mrs May has decided to tough it out, even though ‘Sod It!’ appears the only sensible conclusion.

Then it dawned on me. She’s enjoying this. What we’re witnessing here is Fifty Shades Of May.

We’re all vaguely aware that the romantic sweet-spots — and indeed, fantasies — of males and females are poles apart. 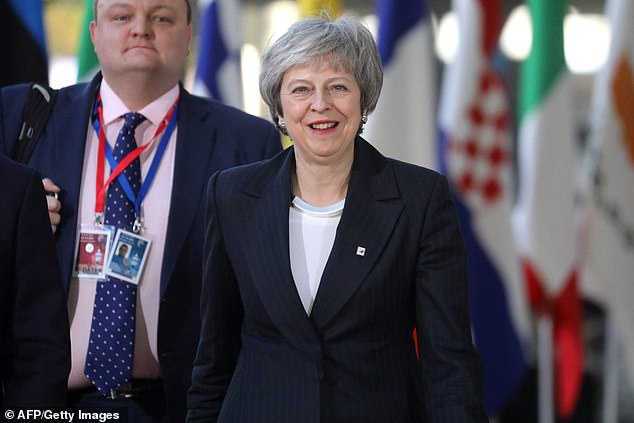 Theresa May arriving in Brussels for a European Summit aimed at discussing the Brexit deal, the long-term budget and the single market

It’s why I get a bigger buzz watching Spurs score a late equaliser against Barcelona — or June Whitfield trying to seduce Arthur in Minder — than having to sit through that hairy ape scything stripped to the waist on Poldark.

But, for some reason, I’ve never really thought of Theresa May being similarly susceptible to such base passions.

Stands to reason, though, when you come to think about it.

You know what they say about vicars’ daughters. Fiona Richmond, anyone?

We’ve been looking at Theresa’s treatment by the EU and her own MPs through the wrong end of the kaleidoscope. Most (male) commentators see only humiliation after humiliation and, like me, can’t fathom why she keeps going back for more.

Then again, most (male) commentators haven’t read the Fifty Shades Of Grey series, the sado-masochistic best-sellers by E.L. Wisty, or whatever her name is, which have mutated into major motion pictures, grossing gazillions around the globe. 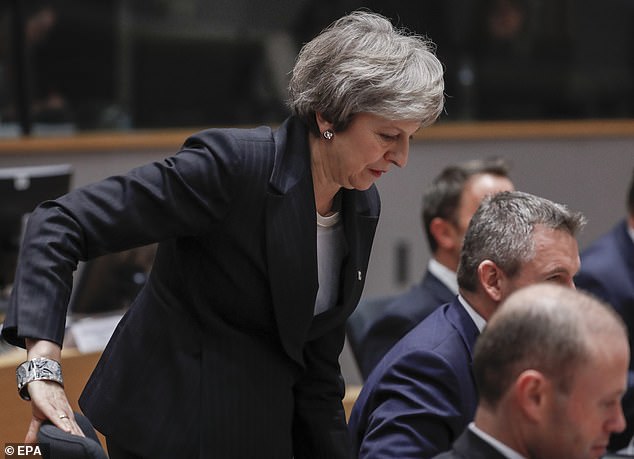 But, seemingly, the ladies have other ideas. Why else would the Fifty Shades franchise have proved so popular? I’ve never met a man who has read it.

However, I’m guessing that Mrs May has all three volumes discreetly tucked away on her Kindle, alongside biographies of Nancy Astor and Pitt the Younger.

I’m sure I don’t need to explain what passes for the plot of these books to my female readers. But, in order to enlighten the gentlemen, I checked out Fifty Shades on the internet yesterday. Purely in the interests of research, you understand.

Without going into the gory details, the first review I stumbled across described the heroine, Anastasia, being transported everywhere by private jet and subjected to regular, and harsh, chastisement with a leather belt.

Call me old-fashioned, but doesn’t that sound eerily like Theresa May’s deranged dashes around Europe recently, flitting from Brussels to Strasbourg and beyond, only to be rewarded at every juncture with a good thrashing?

Then it was back home for a severe paddling from the 1922 brigade, where she emerged badly bruised but triumphant, ready to fight another day.

Get me the Chief Whip. Now!

In the book, Anastasia signs an agreement not to disclose details of her treatment at the hands of the dominant Christian Grey.

Was this the inspiration for Theresa’s initial refusal to publish the damning legal advice she had received about her backstop? Not to mention her red lines.

Even those like me who think she is a truly dreadful Prime Minister, who has cynically betrayed her manifesto promises and the 17.4 million who voted Leave, have to admit there is a certain magnificence about her bovine stubbornness.

It must be the abject humiliation which keeps her going. Jacob Rees-Mogg missed a trick when he dropped his ultra-polite routine. While he was damning her with faint praise, she was reeling.

Once he went on full offensive, she seemed to feed off the overt hostility and become even more determined to stand firm.

To what end, remains to be seen. I’m not about to revisit all the arguments about why her ‘deal’ is a disaster for Britain. Nor speculate about how long she will stay in the job. My guess is as long as possible, even if she has to be dragged out screaming and kicking after chaining herself to a radiator.

Power is an aphrodisiac, for both men and women, although it does seem you have to be a masochist to enjoy it. 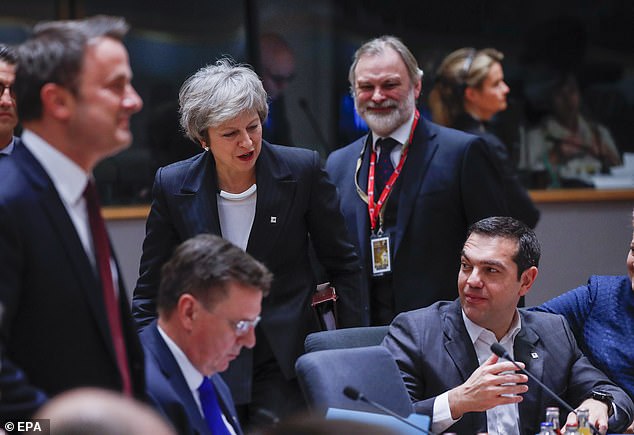 Tony Blair used to boast about the ‘scars on my back’ inflicted by the unions, who tormented him as much as the European Research Group torment Mrs May. At least Blair knew when his time was up. So, too, did our only other female Prime Minister, Mrs Thatcher.

Despite receiving a greater level of support from her backbenches than Mother Theresa did this week, Maggie quickly realised that no useful purpose could be served by clinging to office.

I’ve never seen the parallels between Mrs T and Mrs May, apart from their shared gender. Where Maggie was dominant in Europe, Theresa is submissive, like Anastasia in Fifty Shades.

Perhaps she should take a hint from Mrs Thatcher, who, right at the end, found that her departure was actually liberating.

Thatcher, too, was brought down by Tory divisions over the EU, but for standing up to Brussels, not surrendering.

During her resignation speech in the Commons, Maggie was taunted — as was Mrs May this week — by veteran Labour hooligan Dennis Skinner, who suggested that after leaving No 10 she should become the head of the yet-to-be-founded European Bank.

Mrs Thatcher burst out laughing. ‘I’m enjoying this,’ she said.