Prince Harry donned a face mask from a Californian black-owned female label  while meeting London marathon runners in Los Angeles at the weekend.

The Duke of Sussex, 36, wore a face covering while posing with runners who were starting off their own 26.2-mile route in a park after the usual mass event was scrapped due to the Covid-19 pandemic.

The £23 ($30) yellow and gold face mask was crafted designer Taylor Jay, whose brand of the same name is based in California.

While it is unknown if Prince Harry and Meghan Markle, 39, are sharing the reusable face covering, the brand is described online as ‘designing [clothing] with every woman in mind, knowing a woman’s journey is by nature a multifaceted one’. 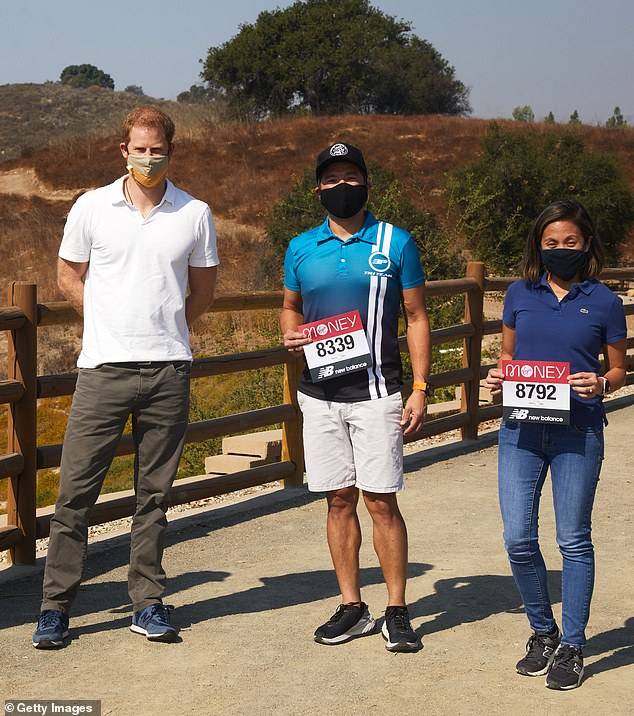 Prince Harry, 36, donned a face mask from a Californian-based black-owned female label while meeting London marathon runners in Los Angeles at the weekend

Online Prince Harry’s cotton mask, which is currently on sale for $21, is described as ‘champagne and honey’ in colour.

The covering was made in Oakland and is described as providing ‘comfort and style.’

The brand was founded in 2012 by Californian-native female designer Taylor Jay, with a focus on ’empowering women with beautiful, versatile, comfortable, fashion basics that easily adapt to any lifestyle’.

The label says it’s mission is ‘envisioning a healthy, positive, and welcoming world in which women can thrive and grow without limits’ and ‘producing clothing that can be integrated with any lifestyle’.

Meanwhile it is also described as ‘environmentally conscious’ and ‘slow fashion’.

The Duke, who is patron of the the London Marathon Charitable Trust, donned the mask as he posed with runners of the race who were starting off in a Los Angeles park.

Prince Harry’s choice to wear a mask by Taylor Jay for the occasion comes days after the Duke and Duchess of Sussex spoke out about racism and Black Lives Matter.

Last week, Prince Harry revealed his ‘awakening’ to the discrimination faced by black people after meeting his wife. 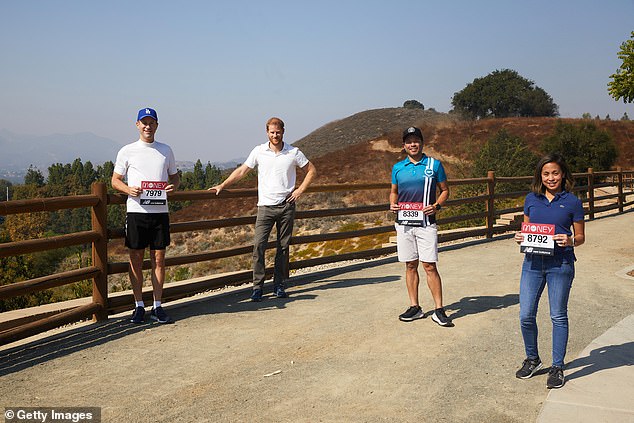 The Duke, who is patron  of the London Marathon Charitable Trust, posed for pictures with runners in a Los Angeles park over the weekend

Speaking on Zoom to the Evening Standard, Harry also weighed in on Diversity’s controversial BLM dance routine on Britain’s Got Talent and said he was ‘surprised’ by the negative comments it had received.

He went on to speak of how he had become more aware of issues of racial discrimination in society and questioned how far Britain had progressed.

The prince said they although London was celebrated as one of world’s most diverse cities, ‘If you actually get out on to the streets and talk to people, it doesn’t feel as diverse as it actually is. 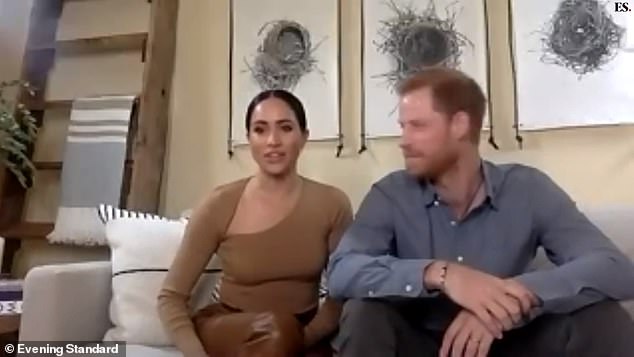 In a separate article for the newspaper, Prince Harry and Meghan said: ‘As long as structural racism exists, there will be generations of young people of colour who do not start their lives with the same equality of opportunity as their white peers. And for as long as that continues, untapped potential will never get to be realised.’

The interview is the latest in a long series of political comments by the couple, including last month when Harry intervened in the US election by urging voters to ‘reject hate speech’.

The comments – which broke royal protocol – were widely interpreted as a call to vote out Donald Trump. They prompted Buckingham Palace to immediately distance themselves from Harry by noting he was ‘not working member of the Royal Family’.