Queen Maxima of the Netherlands cut a sophisticated figure in a navy blue gown as she joined her husband King Willem-Alexander at the Prince Claus Impact Awards 2022.

The Dutch royal, 51, stood out from the crowd in a mid-length dress with intricate glitter geometric pattern detailing and a feather neckline and trim at the awards in Amsterdam.

Argentinian-born Queen Maxima and King Willem-Alexander, who wore a blue suit with yellow tie, were also joined by his mother Beatrix of the Netherlands.

The awards were organised by the Prince Claus Fund, which was established on 6 September 1996 as a tribute to the King’s late father HRH Prince Claus’s ‘dedication to culture and his belief in its role in the development of all societies’. 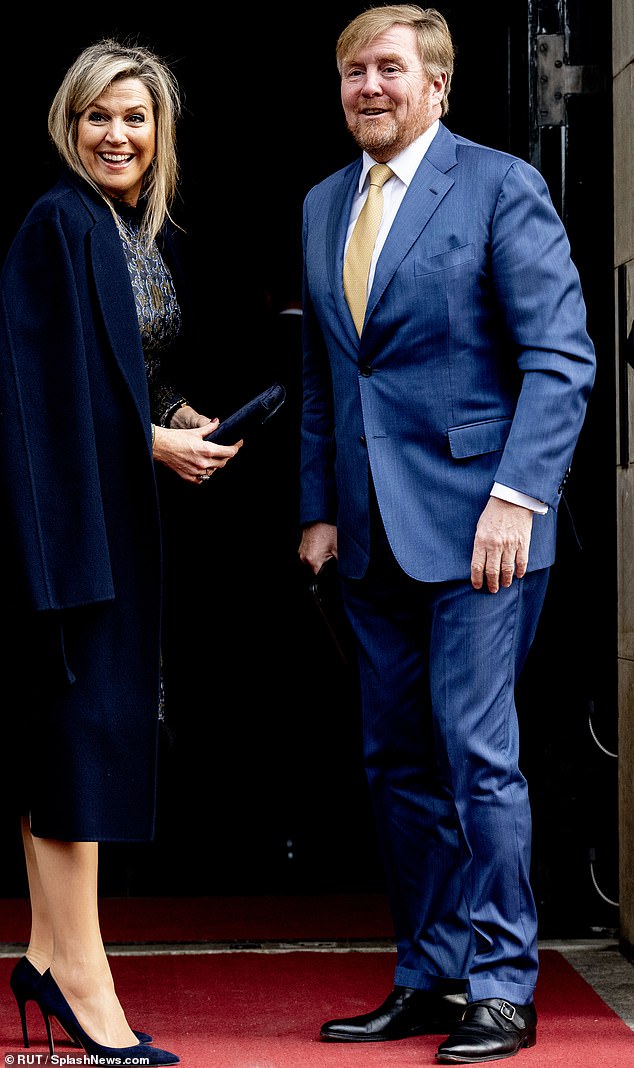 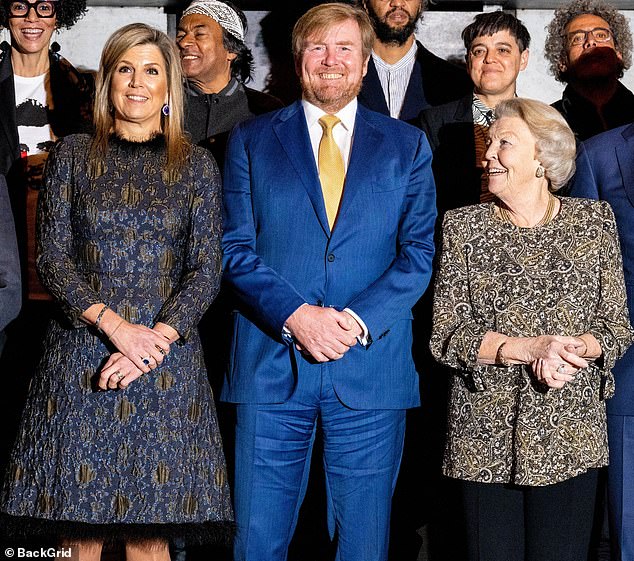 Maxima wowed in a mid length navy blue dress with intricate glitter detail and a feather neckline and trim. She was joined by her husband (centre) and mother-in-law, Beatrix of the Netherlands (right)

In her classic style, the mother-of-three wore her blonde locks loose in a chic side parting, whilst she opted for bronzed makeup and dark eyeshadow.

She arrived at the Royal Palace in Amsterdam, wearing a stylish navy coat draped across her shoulders and holding a matching clutch bag.

The awards celebrate six artists and cultural practitioners who, with their cultural and artistic work, make a positive contribution to the social development of their country. 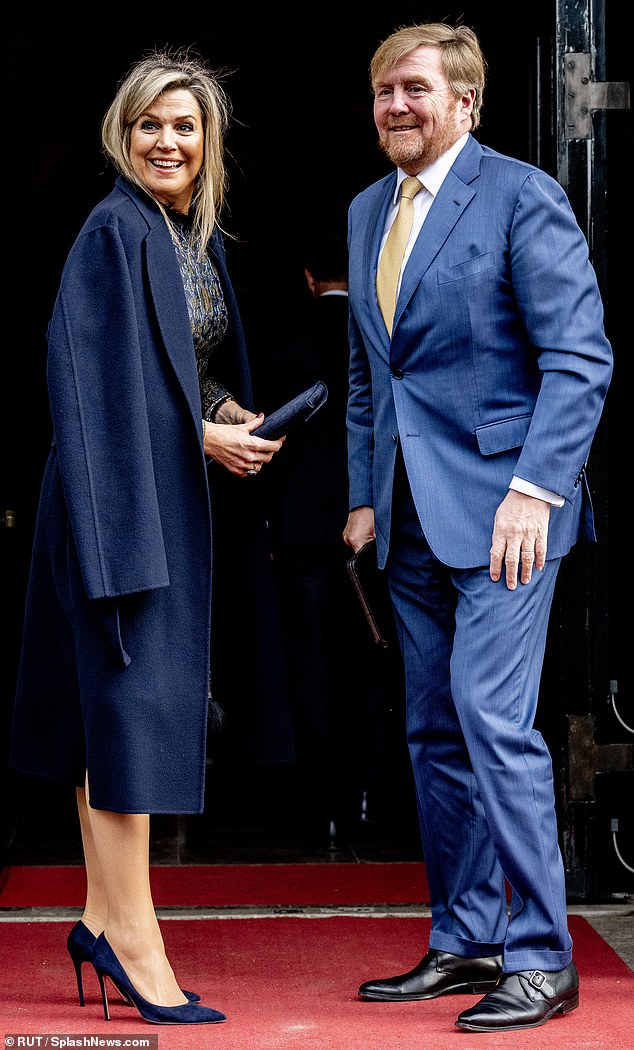 Maxima arrived at the Royal Palace with a navy blue coat elegantly draped across her shoulders, with a matching clutch bag and navy heels

The Dutch royal wowed in her glittery dress, which she paired with a bold sapphire ring and matching earrings 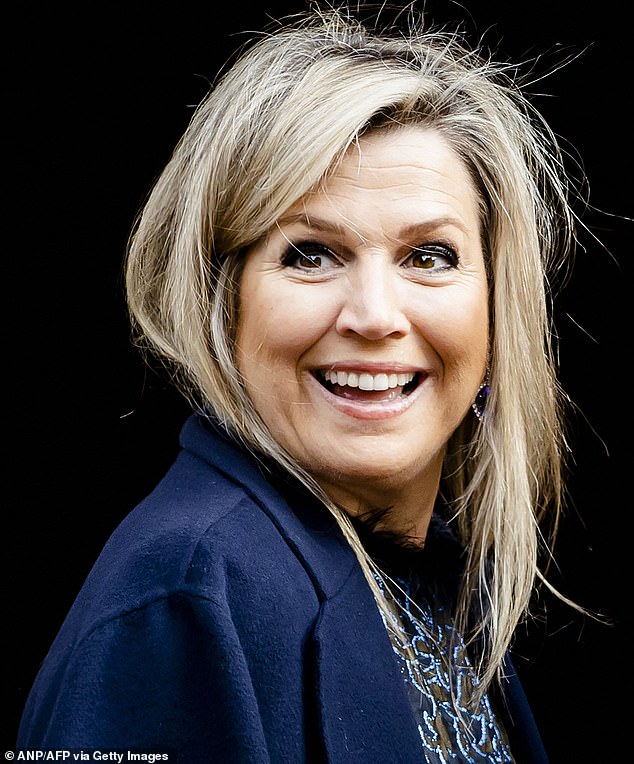 King Willem-Alexander’s brother Prince Constantijn of the Netherlands, Honourary Chair of the Prince Claus Fund, presented the awards at a ceremony in the Royal Palace Amsterdam.

Always one to take an active role in her country, Queen Maxima only yesterday delivered a speech about mental health in The Hague.

She wore a bright purple trouser set as she spoke at the Noordeinde Palace for the MIND Us Foundation – an organisation of which she is honorary president.

The Queen teamed her outfit with a matching pair of purple suede high heels to deliver a speech about mental health. 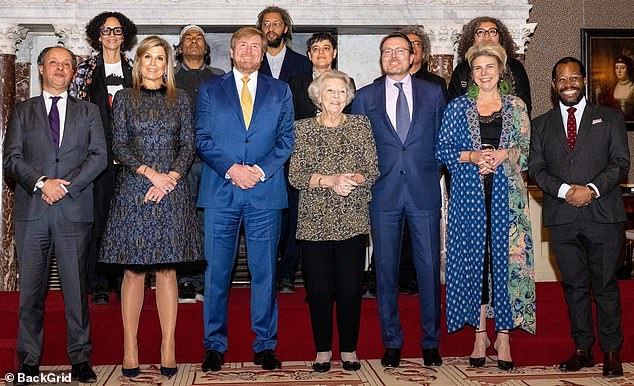 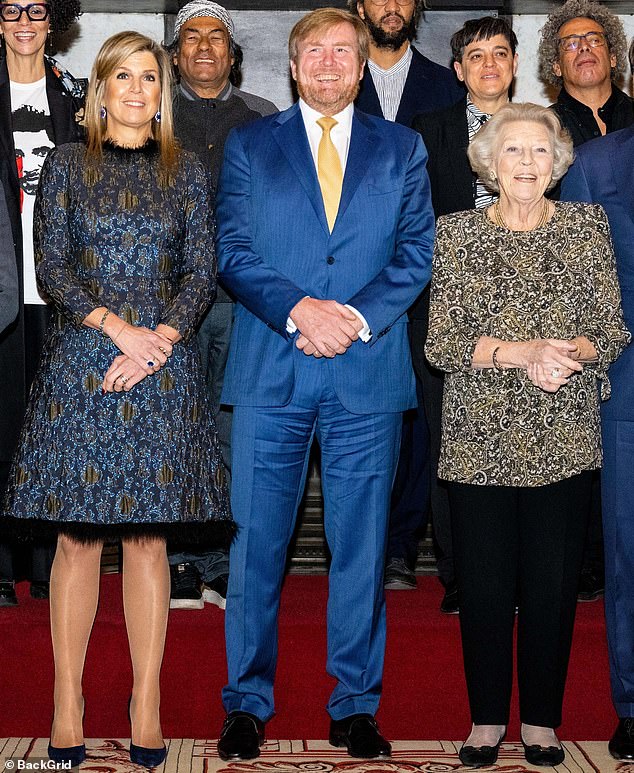 Queen Maxima, King Willem-Alexander and Beatrix of the Netherlands posed for photos in the Royal Palace with the recipients of this year’s awards 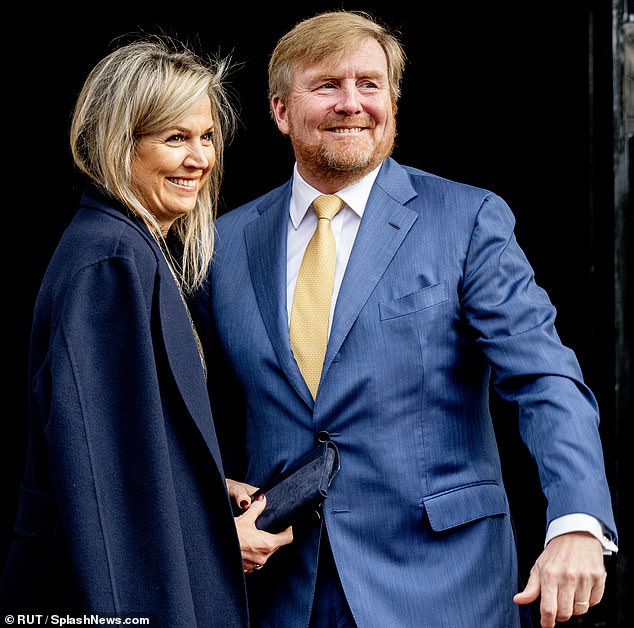 Queen Maxima attended the event for the presentation of a new action plan to help young people suffering with their mental health.

The MIND Us action plan lays out a number of measures, including more walk-in facilities for young people, to increase knowledge and support for those who need it.

If you enjoyed this story…

Here, Queen Maxima of the Netherlands recycles a VERY vibrant coat paired with an emerald dress and matching hat as she steps out in The Hague.

Meanwhile, Maxima stuns in a yellow and blue ensemble at an exhibition opening in Tilburg.

And the Queen of the Netherlands also steps out in a stylish dogtooth dress and cape for the presentation of the Prince Bernhard Cultuurfonds Prize 2022 in Amsterdam.