The week leading up to the ceremony has been productive for the first-time nominee. He’s waking up early to write music each morning, and also released two new tracks on Wednesday, including an homage to singer Sade and a remix of his song “Gaspar Yanga” with Snoop Dogg, which appeared on his debut (nominated) album “Black Habits.”

D Smoke (Daniel Farris) is 35 and the youngest artist nominated in the rap album category, which includes industry veterans like Nas and Royce da 5’9″. But his trajectory differs from many rappers breaking into the mainstream; D Smoke is getting his breakthrough moment in his mid-30s, propelled by his first season win of Netflix’s rap competition series “Rhythm + Flow” in 2019.

“I’m still early on in my journey as an artist,” he says. “This recognition [the two Grammy nominations] kind of fast-forwards things for me in the way that ‘Rhythm + Flow’ did. And so that’s a great thing. A lot of people are catching on as we’re building this catalogue. A lot of times when you get to this level of success, people go back and they find four albums. So now it’s people following this journey from [my first album].”

The rapper’s fans praise both his flow and the lyrical finesse of his songs, and recent music videos have matched his wordplay with cinematic, artful imagery. D Smoke is committed to retaining his authentic approach to music-making as his status rises. Honesty is his currency; he wants his music to move people, and not just be manufactured for people to move to.

“I want to show consistent growth even though on the professional side it’s happening super fast,” he says. “And continue telling the stories that people connect with — not get caught up in entertaining this new audience.”

D Smoke’s two brothers, SiR and Davion Farris, and mother, Jackie Gouché, are featured artists on “Black Habits.” SiR appears on “Closer to God,” a track that speaks to their upbringing singing gospel. (And underscored in the song’s music video, which culminates with a baptism.) “Gaspar Yanga,” D Smoke’s track with Snoop Dogg, is an anthem for his Inglewood hometown, and titled for the 16th-century African leader of a slave rebellion in colonial Mexico. “It’s OK,” which appears on the album’s deluxe version, offers up an optimistic mantra in opposition to struggle: “It’s alright, it’s OK.”

Before all of his recent attention from the music industry, D Smoke worked as a high school Spanish and music teacher at Inglewood High School. In an industry that rewards young talent and is constantly searching for the Next Big Thing, D Smoke represents the payoff of persistence and consistency.

“They say ignorance is bliss, right? So there is a part of me that would have enjoyed having been a rapper from 21 to 33. There are rappers that retire before my age, and I’m just getting into it,” he says. “In hip-hop, we don’t tend to give people in their 30s — until now — that level of platform.”

D Smoke credits life experience for letting him tap into a perspective that wouldn’t have been available to him when he was younger. His experience as a teacher also equips him with a certain awareness; words have weight.

“I’m aware of the effect of my music on other people. I don’t censor myself — so to speak — but I’m intentional on how I incorporate the harsh reality, the uncut dirty rap lyrics, with the reality,” says the rapper. “And that’s some grown man s–t; not everybody does that,” he adds. “We need more music that tells the complete story. In hoods a lot of young kids, especially young Black men, have short-term vision; they don’t see themselves beyond 30.”

His decision to appear on “Rhythm + Flow” was carefully considered; while there are many music competition shows on TV, viewers have been primed to leave the winners behind as soon as a new season brings fresh voices to the stage. For D Smoke, the end of the show marked a beginning.

“Being on ‘Rhythm + Flow,’ it gave me that competitive edge. Given the stipulations of the show, who the judges were, what network it was going to be on and who I understood myself to be as an artist, I knew it was going to be a good publicity opportunity,” he says, adding that being the first winner allowed his team to shape the post-show trajectory.

“We set the precedent for how the following months look: how are we going to transition from a show winner into a respected artist?” he says. “How do we take this opportunity and turn it into a career and not a beautiful moment?”

D Smoke released an EP shortly after the season ended, “Inglewood High,” that represented a continuation of the music he presented onscreen. “When I was a teacher, sometimes I would go in finals mode, like back when I was in college,” says D Smoke, who’s a UCLA alum. “I remember those times where I was back up against the wall, fighting for my spot. The hip-hop game is like that, too, people are competitive,” he adds. “’Rhythm + Flow’ gave me that sense of urgency. We still tap into that energy every time we create.”

He released his debut full-length album “Black Habits” in 2020, and last month released a deluxe version, which featured a new track with rapper E-40. D Smoke’s next album is already underway (hence the morning writing), and the rapper has his fit ready for Sunday’s ceremony. Like music, his fashion approach is rooted in authenticity. 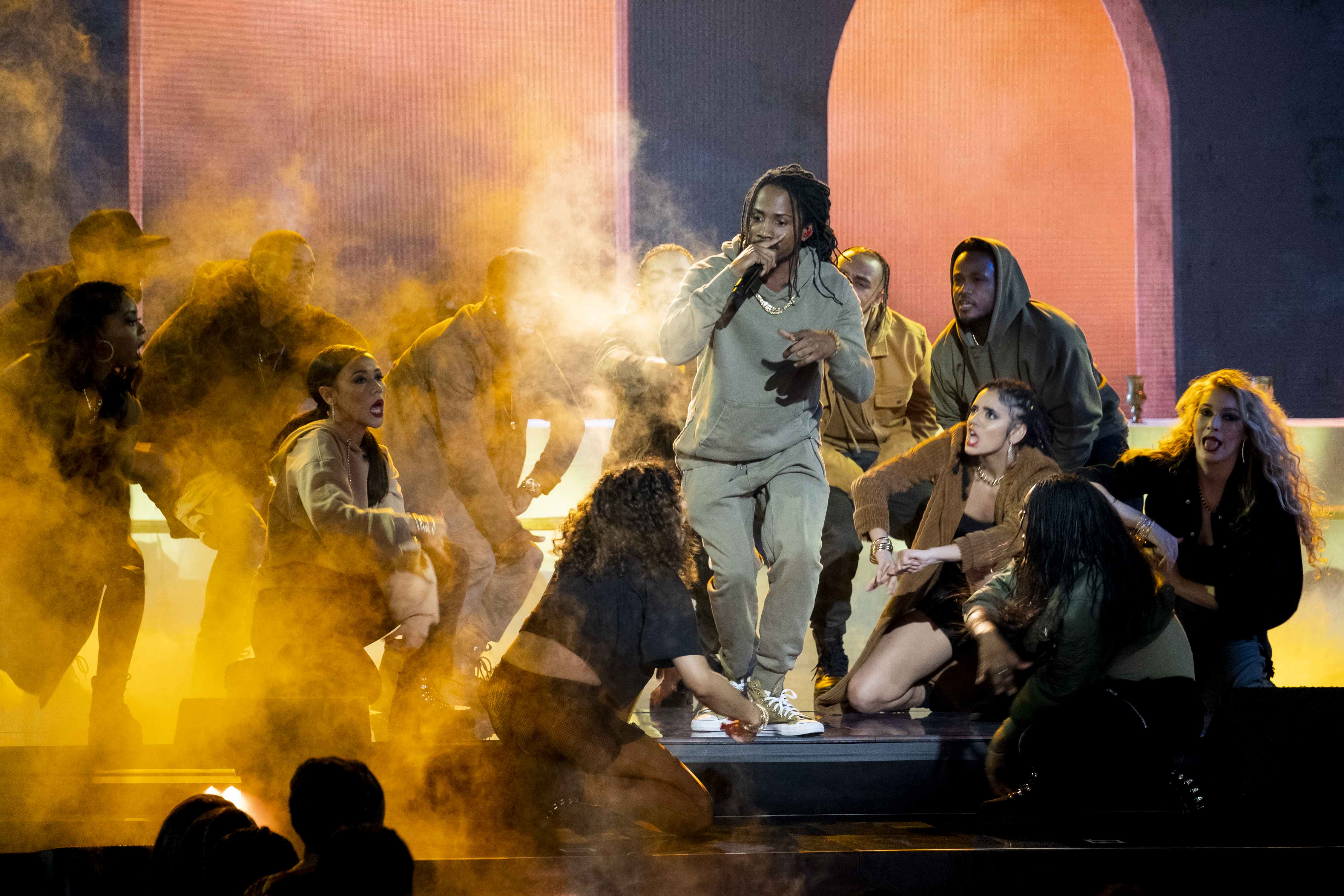 More From the Eye:

Everything to Know About the 2021 Grammy Awards