The Reserve Bank is relying on households to spend billions of dollars of savings over the next few years to underpin its sharply upgraded forecasts for the nation’s economic growth but expects workers will have to wait years for decent wage rises.

The RBA now expects the level of GDP to be about 2 per cent higher by mid-2023 than forecast in February, the central bank’s economic statement released on Friday shows. The improved outlook will help inform Tuesday’s federal budget and shape expectations for the size of deficits over the coming years. 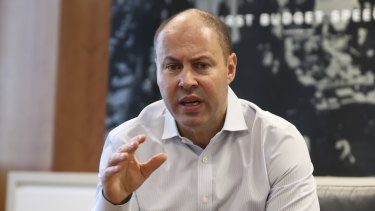 Treasurer Josh Frydenberg is hoping families will start spending the $100 billion accumulated on household balance sheets during the pandemic.Credit:Alex Ellinghausen

Under the most likely of three forecasts, gross domestic product is expected to increase 9.25 per cent in the year to the June quarter 2021, after the economy contracted by 1.1 per cent through 2020. This is followed by 4.75 per cent GDP growth in the year to December 2021. It is a significant improvement from February’s outlook, which tipped an 8 per cent rise for the June quarter followed by a 3.5 per cent increase in the period to December 2021.

“The unique features of the pandemic and policy response have seen the economy rebound much faster than in previous downturns,” the statement said.

The RBA provided three scenarios for how the economy might perform over the next few years. Under the base case, considered to be the most likely outcome, vaccines are expected to be rolled out at a faster rate in the second half of the year, helping lead to a staged re-opening of the international border from early 2020. The outlook assumes no major coronavirus outbreaks and therefore no major lockdowns.

In this situation, the unemployment rate is expected to fall to 4.5 per cent by mid-2023, helping increase wage growth and inflation “a little faster” over the period. Inflation would still be below the RBA’s target 2 to 3 per cent band, with wages growth at about 2.25 per cent.

This could change based on whether households spend more or less than expected. Treasurer Josh Frydenberg is hoping families will start spending the $100 billion accumulated on household balance sheets during the pandemic.

In a better outlook for the economy, where people spend more than expected, the RBA estimates the unemployment rate falling to about 3.75 per cent and inflation rising to 2.25 per cent by mid-2023.

But coronavirus-related restrictions can severely limit what people do with their money. The RBA found consumption growth rapidly improved after the height of the virus but moderated in March to about 1.5 per cent below its pre-pandemic levels due to “short, sharp lockdowns in a number of states”.

Under a bleaker outlook, where households choose or are forced to spend less than expected, this could lead to an unemployment rate of 5.5 per cent in 2023. Inflation would be far below the RBA’s target at 1.5 per cent.

“The downside scenario assumes that some households respond to increases in their wealth due to higher asset prices by less than implied in the baseline, in part because they prefer to continue strengthening their balance sheets,” the RBA says. “High debt levels among some households might be one catalyst for this; a different trigger for prospective homeowners could be rising housing prices and the related need to accumulate larger down payments.”

Commonwealth Bank head of Australian economics Gareth Aird said the wages and inflation data were critical to watch but he was not convinced the RBA was correct that the economy could run hot without generating wages growth and pushing up prices.

“That said, the inflation outlook, particularly with respect to wage outcomes, carries a high degree of uncertainty given we do not know when the international borders will reopen and what that means for net overseas migration,” he said. “If firms are not able to recruit from abroad then as the labour market tightens, skill shortages will manifest themselves faster than otherwise and this will allow some workers to push for higher pay.”

Callam Pickering, the Asia-Pacific economist for job site Indeed, said there was uncertainty about whether Australia could generate enough jobs growth to drive down unemployment, lift wages and provide consistently higher inflation. The nation’s jobless rate had been above 4.5 per cent for more than a decade and wage growth below 3 per cent for eight years, he said.

“Wage growth has been a thorn in the side of policymakers … if the Reserve Bank’s forecasts are any indication, that isn’t going to change anytime soon.”