More than a quarter of the staff monitoring the performance of the highly insecure workforce in the nation's aged care homes are themselves on short-term contracts or are employed casually via labour hire firms.

In Victoria, 655 elderly people have died with coronavirus in aged care homes since July, many from infections brought in by casual workers working across multiple centres. 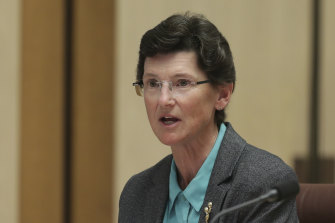 The Aged Care Quality and Safety Commission is the agency tasked with keeping residents safe and making sure institutions adhere to health standards. But lawyers assisting the royal commission into aged care have proposed the establishment of a more powerful regulator, to better protect residents.

The head of the commission, Janet Anderson, last week admitted there had been 2163 "COVID-related complaints" made to her agency since the pandemic began.

Figures supplied to the Senate last week also showed that 184, or 28 per cent, of the commission's 665 staff are casuals, contractors or employed via labour hire firms.

A recent ad placed on online jobs platform Seek showed the commission trying to fill roles for assessors, paying around $50 an hour and employed via labour hire company Adecco. Labour hire companies are paid a commission for placing staff and in some instances take a small percentage of wages too.

Casual and labour-hire staff at the Aged Care Quality and Safety Commission are concentrated in the division charged with visiting homes to assess their performance. Recent job ads for aged care homes assessors show one-year casual employment is typical at the commission.

Ms Anderson said it was sometimes useful to use temporary or casual staff, "in order to fulfil a particular function".

"Alternatively we find we can source a skill set in the contracting market that isn't as available as quickly as recruiting Australian public service staff," she told a Senate committee.

The commission's annual report, released last month, showed Ms Anderson was paid $492,000 last financial year for her work and the top eight staff were paid an average annual salary of $279,000.

In a letter sent in September to the Community and Public Sector Union, Aged Care Minister Richard Colbeck said there were good reasons why so many safety commission staff did not have ongoing roles.

Some "prefer to work as contractors rather than as employees", he wrote.

Mr Colbeck said any contractor that needed sick leave had "been advised to contact their labour hire company … should they contract COVID-19 or are required to self-isolate".

Lawyers assisting the royal commission into aged care have recommended the commission's capabilities, including its assessor workforce, be reviewed. They also recommended overturning the staffing cap at the safety commission in order to better protect vulnerable elderly residents.

While those employed under labour hire contracts were committed to the work they did, "they have no certainty beyond a short-term contract [and] no guaranteed leave if they are sick. With inspectors right at the centre of this pandemic, that's a recipe for disaster".

She said the ageing population meant governments could no longer turn a blind eye to older Australians as had been the case in aged care. And the "arbitrary" public service staffing cap was "doing nothing but lining labour hire company pockets and holding the regulator back".

Professor Ibrahim questioned whether some who worked on temporary contracts as assessors for the commission in part did so to burnish their credentials for later consulting work. "If you know how the commission works, then people will seek you out if they are in trouble."

He said no hospital would ever function with contractors in this way. "The hospital equivalent would be, every few months, you change over your nurses and your doctors and they go work somewhere else," Professor Ibrahim said.

The federal opposition's aged care spokeswoman, Julie Collins, said the high turnover of staff at the safety commission was having an impact on keeping aged care homes safe. The work needed to be done by permanent, experienced staff. "The safety of older Australians in aged care shouldn't be left up to workers in insecure employment arrangements," she said.

The royal commission has also focused on the powers of assessors that visit aged care homes.

At present, Aged Care Quality and Safety Commission authorised officers have powers to enter residential homes only with the express permission of operators.

These officers, who are there to ensure homes are safe for residents, can demand documents and for staff to answer questions, but, under the current rules, staff aren't required to comply with the request.

Lawyers assisting the aged care royal commission last month recommended a safety commission be given the power to enter and search homes without the consent of providers and also the power to compel the production of documents.