Cynthia Bailey’s X-rated bachelorette festivities with Bolo the stripper will continue on the Feb. 21 episode of ‘RHOA.’ A new preview reveals that things get so heated, the cast covers the cameras so that they can ‘actually have fun.’

“Hopefully, we can get you guys to turn off the cameras for a while so that we can actually have fun,” Kandi Burruss mischievously tells the production crew in a sneak peek for the Feb. 21 episode of The Real Housewives of Atlanta. The episode will air a continuation of Cynthia Bailey‘s bachelorette party, which was a sex-themed affair that Kandi arranged as a surprise as the cast enjoys a trip in South Carolina. While the festivities start off as a standard “surprise the bachelorette with a stripper” affair, things appear to take an even naughtier turn in the long teaser that was uploaded to Bravo Insider on Feb. 16.

The preview kicks off with a mysterious confessional from Cynthia: “You know what, I saw some things I’ll never forget, but I just think it’s best to leave all of that behind in [South] Carolina.” The sneak peek video then cuts to the footage of the party: Michael “B.O.L.O THE ENTERTAINER” Bolwaire dancing for Cynthia’s wedding party. The performance gets so heated, Bolo even reaches into his pants…and that part has to be censored! At one point, Porsha even gets up and grinds Bolo, much to her co-stars’ shocked reactions.

However, the fun didn’t end after Bolo finishes his dance. After he leaves the living room, Kandi surprises Cynthia with a gift: a sex swing for her “wedding night” with Mike Hill. Kenya Moore even drops to the floor and performs her own dance in front of the ladies. Porsha then asks Bolo to come back out and “just party.” He asks if the camera crew is still filming, and Porsha says, “No, it’s cool.” Uh-oh!

“No, we can’t really have fun, there’s f-cking cameras everywhere,” LaToya complains to Kandi, who says, “I don’t give a f-ck about that.” And she’s serious — Kandi convinces the camera crew to stop filming “for a while,” and they agree and eventually leave 15 minutes before one a.m. The ladies then go to work at covering the cameras…but some interesting audio is still captured! 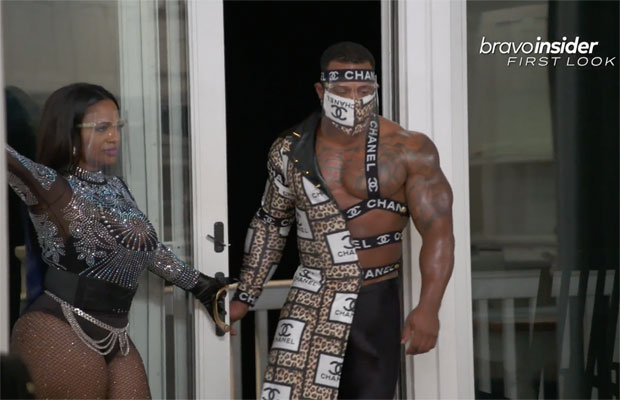 In the “no signal” portion of the preview, Porsha teases in a confessional, “Now we’re going to have the real bachelorette party, where we could really just forget about what it looks like.” Back at the party, she can be heard yelling, “Where is Bolo and his thang?” Porsha later calls for LaToya, and afterwards yells, “Come on down and come ****.” An audio snippet of cast friend Shamea is then played, who says, “Are you a whole bisexual, b–ch?”

You’ll have to tune into next Sunday’s episode to find out what actually goes down at the bachelorette party after-hours; Cynthia even said that she doesn’t think Bravo fans “are going to be ready” for the episode during an EXCLUSIVE interview with HollywoodLife on Feb. 13! This past October, it was reported that two RHOA stars allegedly hooked up with Bolo, according to Page Six. However, he denied this and multiple cast members also denied their involvement.

TUNE IN: The Real Housewives of Atlanta airs Sundays at 8pm ET/PT on Bravo.