Rage at the gates against the elites who ignored the people: ROBERT HARDMAN on the Liberation Day that wasn’t

No luvvies, no rock stars and precious few household names. There wasn’t much in the way of puns or witty banners, either.

And no one would claim that we were looking at a six-figure crowd, let alone seven.

What was beyond all doubt, however, was the depth of the anger directed towards the parliamentarians sitting just over the road – and a visceral sense of betrayal. 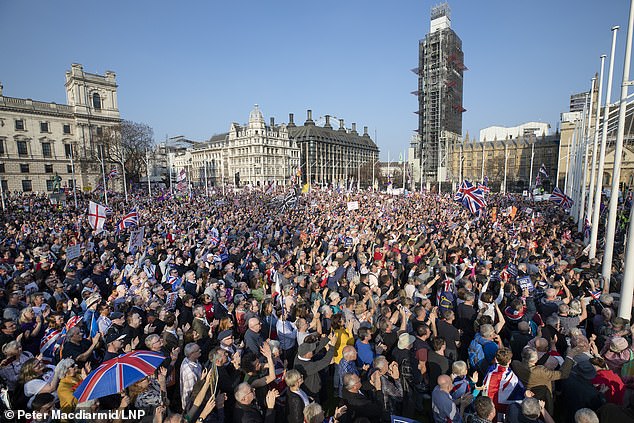 While Saturday’s march in favour of a second referendum had been a slick production, backed by big business and professional marketing experts, yesterday’s show of strength was, frankly, a shambles

Brexiteers had turned out to honour the Liberation Day that wasn’t. For two years, they had been preparing for March 29, circling it in red in the diary, planning a party, sorting out the hog roast and the bunting.

And now it had come to nought. Even so, they weren’t going to let it go unobserved.

So, just like a pop festival, we found not one but two large stages erected on Parliament Square, each hosting a rival attraction while thousands of people wandered between the two deciding which one to listen to. 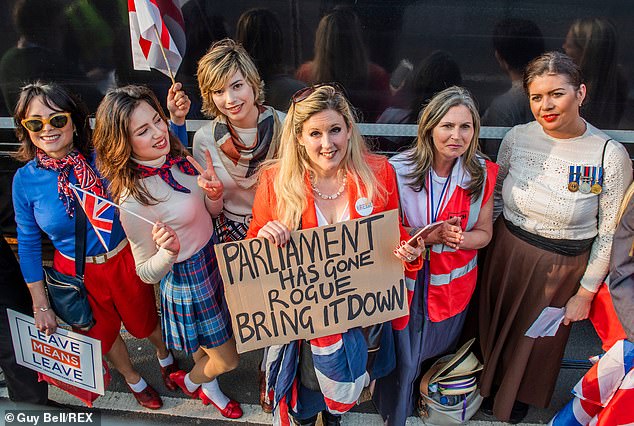 Protestors dressed in red, white and blue and held placards saying: ‘Parliament has gone rogue bring it down’ 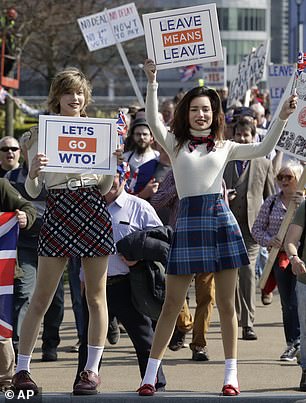 Making a point: Two sisters among the Brexit supporters. Brexiteers had turned out to honour the Liberation Day that wasn’t

Here was Glastonbury for hardcore Eurosceptics.

Should they listen to the Leave Means Leave rally on one side of the square, starring Nigel Farage and Co? Or should they join the ranks of the UKIP rally across the way?

It was noteworthy that even on this day of all days, Brexit’s diehard ultras were still unable to put on a united front.

The crowd were all of one opinion, however. These were No Dealers to a man and woman.

I could find no one with a single good word to say about Theresa May’s deal.

Any call for a clean, two-fingered break with the EU on the rearranged date of April 12 was cheered to the top of Big Ben (still under scaffolding).

While Saturday’s march in favour of a second referendum had been a slick production, backed by big business and professional marketing experts, yesterday’s show of strength was, frankly, a shambles.

The proceedings were supposed to kick off with a 32ft trawler on a lorry trundling through London, except that it never turned up.

Various protest groups – including the band of true believers who had slogged all the way from Sunderland – marched into Parliament Square unannounced. One was accompanied by a Northern Irish pipe band. 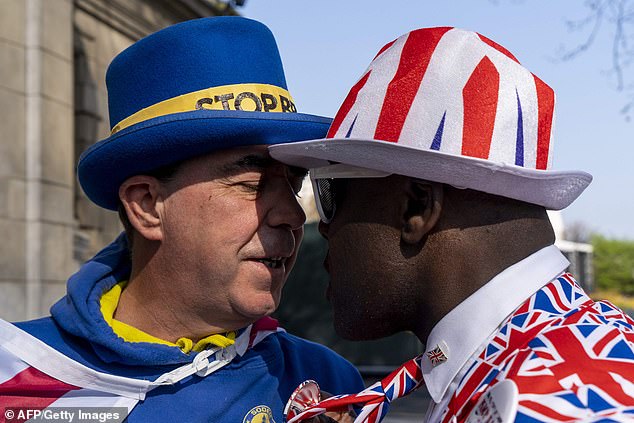 Face-off: A remain supporter, left, and a Brexit campaigner go head to head. Any call for a clean, two-fingered break with the EU on the rearranged date of April 12 was cheered to the top of Big Ben (still under scaffolding) 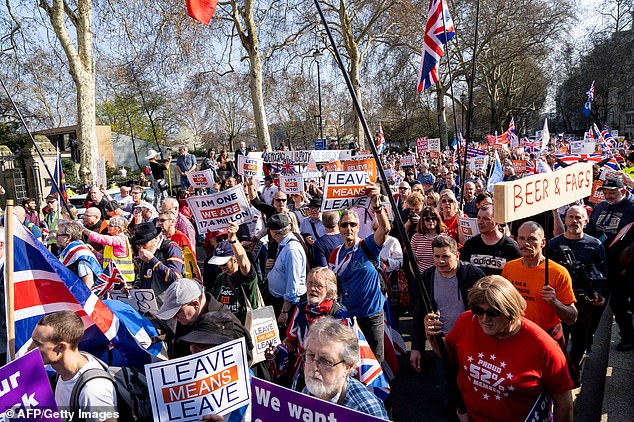 Huge crowds marched from south London along the River Thames to Whitehall today. One woman is seen wearing a ’52 per cent and proud member’

The mood was tense, bordering on ugly in some places. The police had covered Whitehall in crowd barriers and said they had made two arrests, one for assaulting a police officer. A small counter-protest was penned in uneventfully near Downing Street.

Westminster’s pubs overflowed with men of a certain age draped in union flags. If Saturday’s Remain march had the genteel ambiance of a cheese-and-wine do somewhere in the Home Counties, yesterday’s gathering felt more like the countdown to an England World Cup qualifier.

Cross-looking geezers outnumbered women and children by at least ten to one. One throaty UKIP contingent decided to lay siege to the media television platforms and hurl abuse at Channel 4’s Jon Snow and anyone from the BBC.

The equally shouty anti-Brexit brigade who usually camp out here with their EU flags had vacated the area for the day. As news of Theresa May’s latest defeat spread through the crowd, there was no great jubilation.

‘Let’s just see May and her deal gone and let’s get out now,’ said Dave Bradford, 61, a retired print salesman attending the first protest of his entire life.

Like many, he had even put on a yellow hi-vis vest, like the French gilet jaune movement, though he admitted that he was not really sure why. 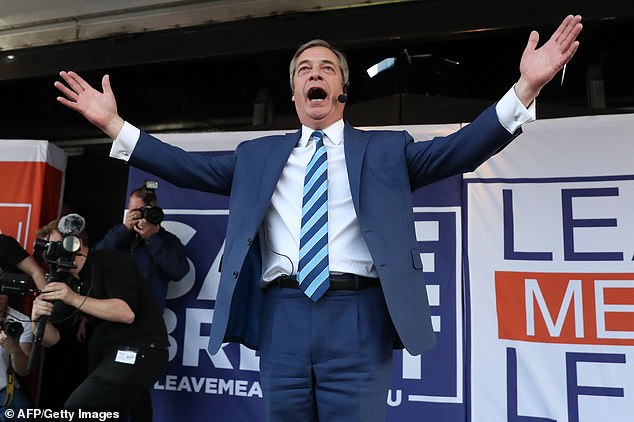 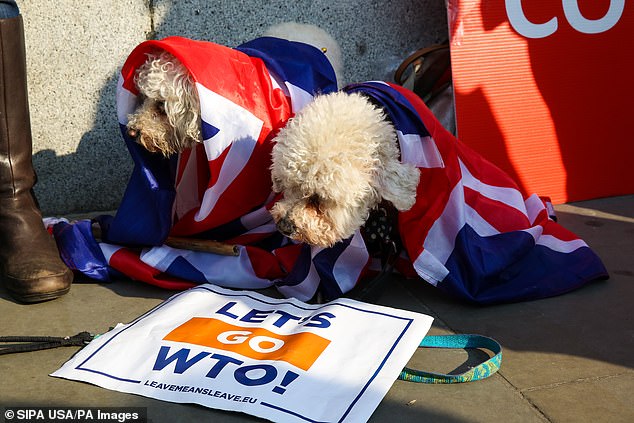 Dogged determination: Four-legged fans among the marchers. The equally shouty anti-Brexit brigade who usually camp out here with their EU flags had vacated the area for the day

‘Europe just want to grind us down and our MPs have behaved appallingly to let it happen,’ said Russell Dawson, 58, an off-duty Argos worker from Bournemouth.

Karl Norris, 57, from Cwmbran, dismissed the fact that the crowd was no match for Saturday’s Remain event. ‘That lot were mostly from London and it was a weekend anyway,’ he said.

‘We are working people from all over the country who have had to take a day off work to be here.’

I met several Londoners including Paul Johnny, a council worker from the solidly Remain borough of Haringey.

Most of his colleagues at the council, he said, had fallen for the ‘propaganda’ about the risks of leaving. 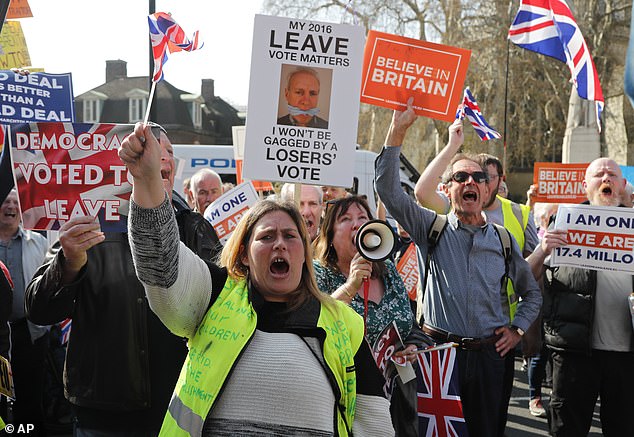 Originally from Sierra Leone, he believed that a No Deal exit would soon see Britain hatching new deals with its neglected Commonwealth allies.

The mood was funereal but not defeatist. At one point, a mobile belfry came round the square on a trolley, tolling its bell for Brexit.

Cornish UKIP activist Duncan Odgers, 52, had turned up with a coffin and a speaker playing ‘Bring Out Your Dead’ on a loop.

‘I have been wanting to leave the EU ever since I got my British citizenship 20 years ago,’ said Jessica, a former US citizen and mother-of-four, from Richmond, south-west London, one of the most anti-Brexit districts in the land.

She did not want to give her full name, she explained, because of the grief she gets for being a Leaver in ardent Remainer country.

‘People are shocked to meet a woman with two first class degrees in economics and her own business who thinks the EU is bad for this country,’ she said.

As the numbers grew, so did the volume of the two rallies. 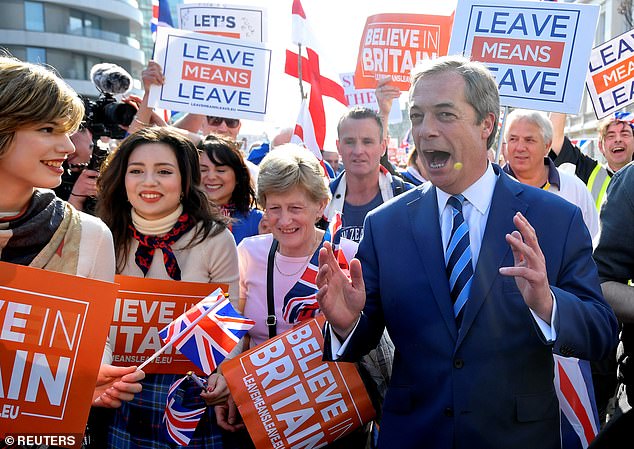 It should be noted that she attracted a larger crowd and louder cheers by some margin.

There was a surreal moment as Tory Brexiteer Peter Bone appeared on one stage only to find himself drowned out by a chorus of Land of Hope and Glory from the competing UKIP sound system across the way.

Finally, it was Father Brexit himself, Nigel Farage, who brought this downcast lot to a semblance of euphoria. 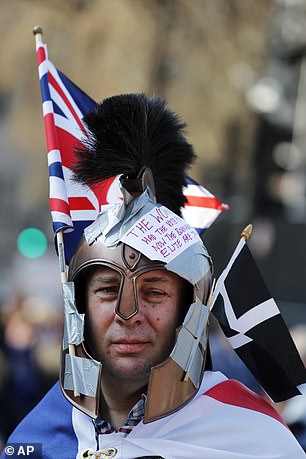 For two years, they had been preparing for March 29, circling it in red in the diary, planning a party, sorting out the hog roast and the bunting. And now it had come to nought

‘Nigel! Nigel!’ came the messianic chants as the former UKIP leader appeared – not on the UKIP stage but on the rival platform.

‘Here in Westminster, we are in enemy territory,’ he told them. ‘I am more determined to fight back against this political class than I have ever been in my life. We are the real people of this country and we will get our country back.’

Off he went followed by a closing chorus of I Vow To Thee My Country.

Even so, it would be a very foolish politician who shrugged off these scenes as the mere rumblings of a fanatical minority fringe.

This was easily as large as the first anti-Brexit rally on this very spot on the weekend after that epochal referendum. Regard it as a foretaste rather than a footnote.