SARAH VINE: Flinching every time I walk past a pub garden, ringing in the ears at the mention of bridesmaids’ dresses. Argh! Prince Harry has given me PTSD – that’s Post Traumatic Spare Disorder

Perhaps it’s just me, but after almost a week of wall-to-wall Harryonics, I woke up yesterday morning with what can only be described as PTSD (Post Traumatic Spare Disorder).

The symptoms are unmistakable. I flinch every time I walk past a pub garden, haunted by visions of the young stallion vigorously servicing a sturdy bottom-slapping lady equestrian. Each time anyone mentions bridesmaids or dresses I get a ringing in the ears.

As, I’m sure, has Courteney Cox, aka Monica from Friends. I mean, of all the people she might have thought would leak the fact that she keeps ‘a huge box of black diamond [magic] mushroom chocolates’ in her house in Los Angeles ‘for everybody’, or that he ‘washed them down’ with tequila, I’ll wager Prince Harry would not have been top of her list. 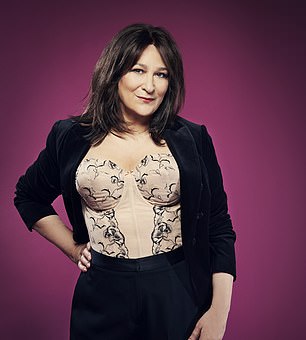 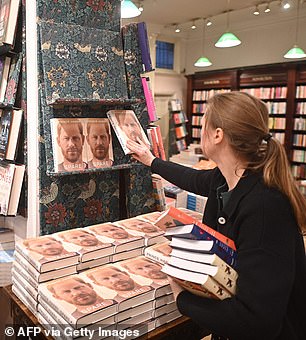 SARAH VINE: I woke up yesterday morning with what can only be described as PTSD (Post Traumatic Spare Disorder)

That said, I have yet to mistake my kitchen bin for a human head (as Harry did after consuming the fungi-infused confectionery); but I have come to view my Ikea lamps in a less flattering light. Well, the Sussexes were ashamed of theirs.

As for my sofa, bought second-hand from a friend, imagine my horror when I checked and discovered that, like Harry’s and Meghan’s, it came originally from sofa.com? I kid you not.

I’m so confused. I mean, are the Royal Family racist or not? First Harry says they are, then he claims they’re not — and that he never said so in the first place, even though we all witnessed it with our own eyes and ears.

Then again, just as recollections may vary, appearances can also be misleading: Meghan, for example, Harry tells us, is ‘not visibly black’ — whatever that means.

As for Camilla, Queen Consort, is she or isn’t she a ‘villain’? Again, first he said she was, then he said she wasn’t. I’ve met her a couple of times and always thought she was perfectly nice, but admittedly I never checked her for signs of horns or a pointy tail.

Turns out I’m wrong. If I’ve fallen for her, I’m the victim of the Queen Consort’s nefarious plot to inveigle herself with members of the British Press.

How could I have been so stupid as to mistake this evil media mastermind for a rather jolly middle-aged lady in comfortable shoes who quite likes a glass of wine and a chat about books? 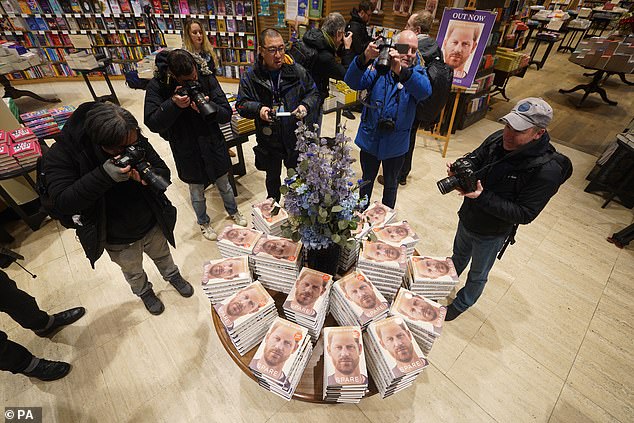 Perhaps the problem is I just don’t believe enough in my own truth. I mean, I’ve never hugged a grave or communed with the dead via my Christmas decorations — although the cat did knock one or two off the tree this year.

Could someone have been trying to tell me something? My dear departed granny, perhaps? My father always said she was a bit of a bauble-breaker.

Maybe I should open up my doors of perception to the hallucinogenic plant-based brew ayahuasca, as Harry did.

Or perhaps it’s my hormones. Or lack thereof. I’m post-menopausal, you see — although not many people know me well enough to point that out.

Or maybe I should just stop. Maybe we should all just stop. Stop letting this man fill our heads with his inconsistent ramblings. Stop dancing to his and Meghan’s siren song. At the end of the day there are worse things in life than being given the slightly less nice bedroom at Balmoral.

And there are more important things to worry about than someone we used to hold in great affection — but who is now nothing less than a national embarrassment.

Two books… can you spot the difference?

Kudos to the manager of Bert’s Books in Swindon, whose carefully arranged copies of Spare were displayed yesterday alongside . . . Bella Mackie’s How To Kill Your Family.

And to The Open Book in Richmond, South-West London, which placed its copies next to A History Of Treason by Diarmaid MacCulloch. 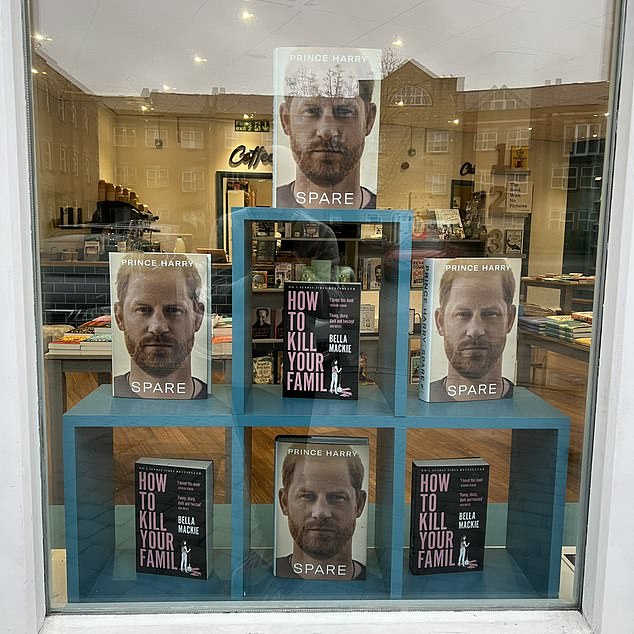 Kudos to the manager of Bert’s Books in Swindon, whose carefully arranged copies of Spare were displayed yesterday alongside . . . Bella Mackie’s How To Kill Your Family

Prince Harry: ‘I hate the tabloids.’

Also Prince Harry: ‘Here I am on the cover of People magazine.’

A new series of ITV’s execrable Love Island is upon us. Can’t say I’m looking forward to it — although it’s always fun to see the latest plastic surgery trends up close.

That said, this year’s line-up is unusual in that one of the male contestants, Will Young, owes his physique not to steroids or implants but to good old-fashioned hard work: he’s a farmer, which in certain woke circles is not much better than being an arms dealer.

The series hasn’t even started and he’s already getting death threats thanks to PETA accusing him of being a ‘disgusting creep’ for sharing a video online of him assisting a ewe that was struggling to give birth. Knowing ITV they’ll probably pair him with a vegan . . . 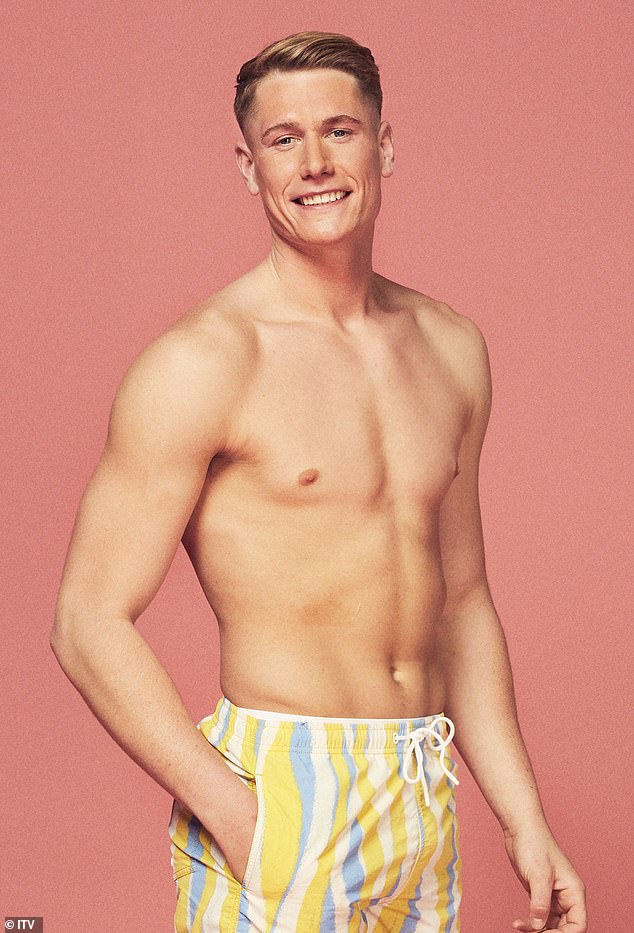 This year’s line-up is unusual in that one of the male contestants, Will Young, owes his physique not to steroids or implants but to good old-fashioned hard work: he’s a farmer

The number of people taking out private healthcare has increased by almost half a million in the past year, as patients increasingly find they can no longer rely on the NHS. A huge boost for insurers such as BUPA.

Just imagine if the NHS itself had an option whereby patients could pay a monthly premium for access to certain non- emergency treatments.

All that extra money would go straight to the NHS instead of private shareholders — and everyone, those who can afford to pay extra and those who can’t, would benefit.

I have never bought any of the silly conspiracy theories about Elon Musk — until he revealed his intention to increase the character limit on Twitter posts from 280 to 4,000.

Now I know he really is in league with the Devil. 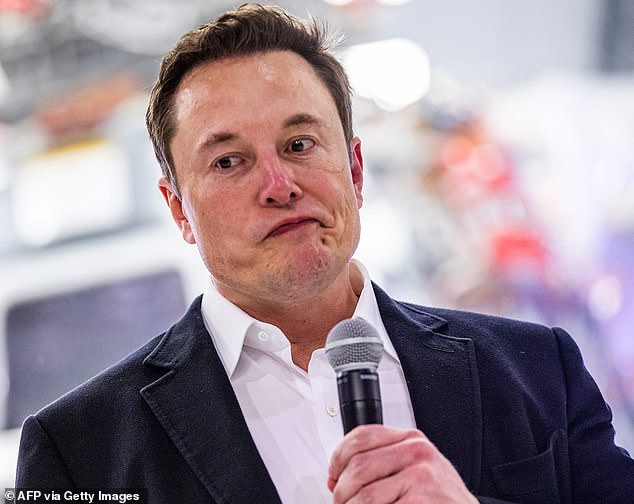 I have never bought any of the silly conspiracy theories about Elon Musk — until he revealed his intention to increase the character limit on Twitter posts from 280 to 4,000

Government scientists have sparked outrage by suggesting older-looking asylum seekers who claim to be underage could undergo medical tests on teeth and bones to determine if they are telling the truth.

But what else is the Government supposed to do?

Turn a blind eye and let them lie and cheat the system to take the place of real youngsters? That is the real outrage.

A hungry grey seal has forced a popular fishing lake in Essex to close after gobbling up over £3,000 worth of carp, bream and catfish, resisting all attempts by the RSPCA and Essex police to capture it.

Maybe they should think about calling in the Duchess of Sussex. It was her ability to charm the animals with her dulcet tones on a trip to Scotland that, he claims, convinced Harry she was special.

‘She really is magic, I thought,’ he writes in his book. ‘Even the seals know it.’ 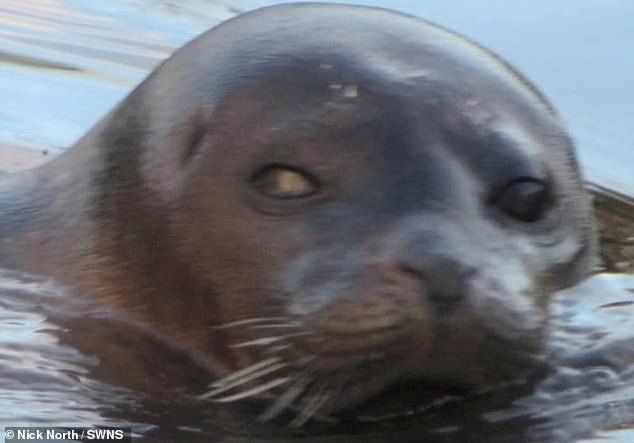 A hungry grey seal has forced a popular fishing lake in Essex to close after gobbling up over £3,000 worth of carp, bream and catfish

I must confess I’m relieved that the LauncherOne rocket mission in Cornwall descended into Pythonesque farce.

Anything else would have been very un-British. We can’t go around winning the space race — that’s the Americans’ job.

Ours is to make everyone laugh with our tinpot attempts at world domination.

What on earth possessed Grant Shapps (or more likely one of his SPADs) to airbrush Boris Johnson out of a picture of them at the pre-launch of the ill-fated rocket launch?

I know Boris is not everyone’s cup of Tory tea — but it’s going to take more than computer wizardry to keep the Big Dog down.