Prime Minister Scott Morrison is sharpening an election pitch against big tech, pitching himself as a leader who is willing to take on the digital giants.

In a clear indication the Coalition’s big tech crack down will form part of its re-election campaign, Mr Morrison characterised the companies as a potential threat to Australia and his willingness to take them on as a demonstration of his leadership qualities. 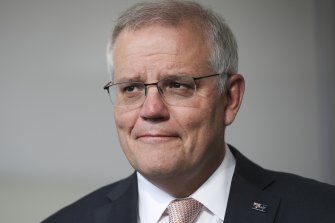 Prime Minister Scott Morrison made an early morning election pitch centred on a big tech crack down during his visit to a Headspace centre in Queanbeyan, NSW.Credit:Alex Ellinghausen

Mr Morrison made the comments during a visit to the Headspace centre in Queanbeyan just over the border from Canberra in NSW, where he announced a broad-ranging parliamentary inquiry into the toxic impacts of social media.

Facebook, Instagram, TikTok and Twitter are expected to be called by the inquiry, which will begin public hearings this month and report by February 20, adding firepower to the government’s campaign in the lead-up to the federal election next year.

On Monday, the government hinted the federal election could be held in early May, after setting March 29 as the date for the federal budget, but this can be changed at any time.

Mr Morrison rejected as “cynical” the suggestion the inquiry was set up to bolster the Coalition’s campaign platform, saying he was acting on concerns from parents about their children’s exposure to harm online.

“This is an issue that has burned in our hearts and our actions over the course of our government,” Mr Morrison said.

This year has seen the harmful impacts of social media, in particular on Facebook and its sister site Instagram, generate global attention after whistleblower Frances Haugen leaked troves of damaging company documents known as the “Facebook Files”.

The documents formed the basis of a series of media reports by the Wall Street Journal, The New York Times and others, about the company’s knowledge of the spread of misinformation, conspiracy theories and hate speech on its platform and the propensity for Instagram to worsen body image issues among teenagers.

As part of its big tech crack down, the federal government on Wednesday will also release an exposure draft of proposed laws aimed at forcing social media companies to reveal the identities of anonymous trolls who defame people online. The laws will propose creating a new Federal Court order to force social media giants to disclose identifying details of trolls without their consent to victims, enabling them to take defamation action. But legal experts have queried how those laws differ in practice to existing court processes, and courts have already ordered tech giants to reveal the identities of people posting anonymous comments online.