Cashed-up consumers scared of using public transport due to the coronavirus have driven used car prices up almost 50 per cent since the pandemic started, but they now face a fall in the value of their worn set of wheels.

Data compiled by Moody's Analytics and Datium Insights shows just as the market for toilet paper and pasta was up-ended by measures to stop the spread of the coronavirus, demand for second-hand cars has accelerated.

In the immediate advent of the coronavirus, when many Australians were forced to work from home, wholesale used-car prices nose-dived to their lowest point in at least half a decade.

But since April, they have grown by 49 per cent. They are now a third higher than in October last year.

Moody's analyst Michael Brisson said under normal circumstances, used cars had a maximum price above which a person should not pay any more, which is usually the manufacturer's recommended retail price.

The older a car with more kilometres on the odometer, the more it should depreciate in value.

But Mr Brisson said this relationship had been broken by the pandemic as consumers had bid up the price of used cars.

"For a durable good with a limited life such as a vehicle, it is not sustainable for prices to rise faster than depreciation without any source of scarcity," he said. "There is a limit to how high prices rise before consumers turn to other options, and the used vehicle market has quickly approached this level."

Mr Brisson said demand was being driven by fear among workers about using public transport during the pandemic.

Data from the Australian Bureau of Statistics on Monday confirmed how few people were using public transport. 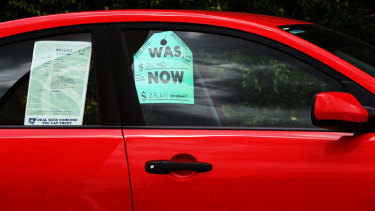 Wholesale used car prices climbed almost 50 per cent between April and October but there are signs they are about to start falling.Credit:Peter Braig

The proportion of people saying they never used public transport climbed from about 50 per cent pre-March to 80 per cent last month.

The supply of second-hand cars is also down. Leases and fleets have had fewer vehicles being turned over, in part because people have not been driving their cars and putting kilometres on the odometer.

It's not just second-hand cars that have caught the interest of consumers.

Sales of road motorbikes were 8.2 per cent higher in the recently completed September quarter compared to a year ago, while off-road bike sales were almost 40 per cent higher.

But there are signs the love affair with used cars is coming to an end.

So far this month, prices have dropped by 3.1 per cent. For the first time in eight months, prices dropped in consecutive weeks.

New car sales are also continuing to fall. In the year to October 31, sales of new cars were 18.8 per cent lower than the same period last year.

Mr Brisson said as the economy recovered, prices of used vehicles should begin to normalise.