Farmers are trying to turn a lack of available shearers into a win for young workers looking to boost their wages as the wool industry grapples with an ageing workforce, demographic shifts and blockages at the international border.

The 500 Kiwi shearers that used to provide surge capacity are no longer crossing the ditch for the busy spring season, due to the risk they’ll be blocked from returning or forced into quarantine. 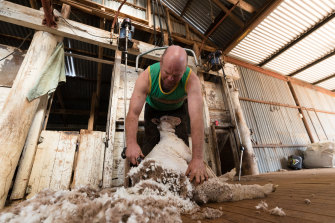 A shortage of shearers has prompted a call for young Australians to take up the trade. Credit:Janie Barrett.

Meanwhile, Australians are growing more and more reluctant to take on the hard labour and itinerant employment from chasing the clip across Australia’s woolgrowing districts. There are about 2000 working shearers in Australia now, down from 10,000 30 years ago.

But with $1500 gross weekly earnings in reach of a shearer with about six months experience on the job, NSW Farmers Association is tuning its pitch to school-leavers by promoting the near-term earning potential for those who want to start saving for their future.

It can be hard work, but it’s rewarding and the pay can set the savvy saver up for a great future

Shearers are paid by the sheep and gun workers can earn more than $100,000 a year.

“It can be hard work, but it’s rewarding and the pay can set the savvy saver up for a great future,” said NSW Farmers Wool Committee Chair Helen Carrigan.

Ms Carrigan, a wool producer from Garah in northern NSW, said the industry in her state is now following the lead of others and setting up an advisory group of shearing trainers to mentor new workers as they make their way in the industry.

“If we can encourage young people to get into the sheds to be trained and mentored we can not only set them up for success but also help solve this worker shortage.”

WoolProducers Australia president Ed Storey “fully endorses” NSW Farmers’ push to promote the opportunities for young Aussies to take up the shears and encouraged producers to get on board.

“Growers and shearing contractors have to ensure we are offering stands to learner shears to ensure we have a steam of young people coming through,” said Mr Storey, who farms at Yass, NSW.

Shearing is a skilled trade, but state training bodies are offering free courses to get qualified.

NSW Farmers president James Jackson said the worker shortage had delayed shearing for some producers, which was eating into their profitability.

“Opportunities are being lost because if you don’t shear animals when they need it can create a break in the wool,” said Mr Jackson, a woolgrower from Guyra on NSW’s Northern Tablelands.

“The fibre can become too long and mills have to adjust their machinery, which means they discount the wool.”

Leaving shearing for too long also increases the risk of ewes becoming cast, or stuck on their backs, with heavy wet fleeces – especially at lambing time.

Australia’s wool industry is recovering with great growing conditions over the past two years, following an intense drought on the eastern seaboard. Producers are rebuilding their flocks and Australia’s wool export markets remain strong.

But Australia no longer rides on the sheep’s back. The national flock peaked at 180 million head in the 1970s but that has fallen about two-thirds to just over 63 million today.

Sheep and wool industries are bouncing back with a focus on farming techniques, animal nutrition, selective breeding and increased fertility nearly doubling the industries’ value over the past 20 years to a combined $9 billion a year.