Shehu Shagari, the former president of Nigeria who sought to revive democratic rule only to be deposed by military officers impatient with his seeming inability to confront endemic corruption and economic crisis, died on Friday in Abuja, the capital. He was 93.

Mr. Shagari died at the National Hospital after a brief illness, his grandson Bello Shagari said on Twitter.

It was a token of Nigeria’s long tug-of-war between the barracks and the ballot box that President Muhammadu Buhari — who, as an army general, removed Mr. Shagari from power in 1983 — returned to office in the 2015 elections, the first peaceful transfer of power between civilians of different political parties since Nigeria’s independence from Britain in 1960.

By then, Mr. Shagari, patrician and mild-mannered, had become what his followers called an elder statesman as his country grappled with challenges that had become familiar: an almost reflexive recourse to graft; an economic malaise relating to falling prices of oil, Nigeria’s dominant foreign-currency earner; and a fierce divide between its northern Muslims and southern Christians that became ever more stark with the rise of a bloodthirsty jihadist movement called Boko Haram.

On his 90th birthday in 2015, President Goodluck Jonathan and five previous presidents came to visit him, Nigerian news reports said.

“I mourn the departure of a patriot, who served Nigeria with humility, integrity and diligence,” Mr. Buhari said Saturday on Twitter.

Mr. Shagari was president for just over four years, winning two elections, both of them disputed by his opponents. He was criticized by his adversaries for his meekness in governing sub-Saharan Africa’s most populous nation. Indeed, with his scholarly manners, the undemonstrative Mr. Shagari, a former schoolteacher raised as a devout Sunni Muslim, sometimes seemed an unlikely figurehead for a nation that projected itself as Africa’s colossus.

He was the first civilian leader to take office under a constitution modeled on that of the United States, with an executive president, a bicameral legislature and significant powers given to the governors of the country’s 19 federal states.

While most post-independence rulers were high-ranking soldiers bent on enforcing their will with scant regard for consensus-building, Mr. Shagari, in his flowing Islamic robes and distinctive beaded headgear, described himself as a conciliator who operated above the daily joust of Nigeria’s politics.

But he could not remain aloof from a global glut in oil that sent prices tumbling in the early 1980s, just as the people who voted him into power were expecting better lives. In 1983, as economic woes seized the land, he presided over one of his country’s most dramatic peacetime upheavals, ordering the expulsion of foreigners drawn to Nigeria by its oil wealth. 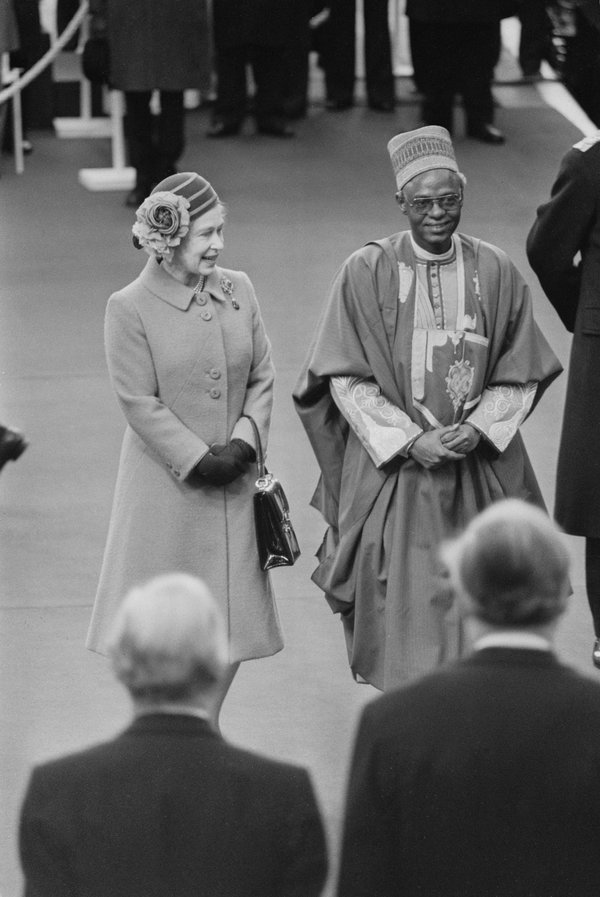 Up to two million people, many of them Ghanaians, fled the country in what was seen as one of modern Africa’s biggest population shifts.

It was not the only sign of turmoil. In northern cities such as Kano and Maiduguri, followers of an Islamic cult rampaged for three successive years, sacking churches, attacking religious rivals and threatening the authorities’ ability to deal with sectarian passions.

In October 1982, Mr. Shagari was criticized by his foes for granting amnesty to 1,000 members of the so-called Maitatsine cult — sometimes depicted as the forerunner of Boko Haram — who had been imprisoned since 1980. A month later, a fresh convulsion of violence killed hundreds of people and challenged the government to restore calm without calling on the military, which would have been seen as a tacit acknowledgment of civilian failure.

It was on Mr. Shagari’s watch, too, that the authorities made it a priority to proceed with the construction of a new capital in Abuja to escape the chaos and tribal affiliations of Lagos, which remained the commercial heart of the country.

In theory, the location and design of the new capital were emblems of unity among the dominant ethnic groups, roughly equidistant from the Yoruba heartland in the southwest, Ibo strongholds in the east and the largely Hausa Fulani north. The grand project, however, was slowed by the economic crisis and became a byword for lucrative construction contracts.

When Mr. Shagari was re-elected for a brief second term in August 1983, shortly before his ouster on Dec. 31, Pat Utomi, a political scientist and commentator, remarked: “Nigerians see Shagari as a nice man, a gentle man, but not as a particularly strong man.”

Shehu Usman Aliyu Shagari was born on Feb. 25, 1925, in a thatch-roofed house built of sunbaked clay in the village of Shagari, founded by his forebears near the city of Sokoto in northwest Nigeria, an area of broad, arid savanna, according to “President and Power in Nigeria” (1982), a biography by the British journalist David Williams.

In later years, the honorific Alhaji was added to his name to denote his participation in the Muslim pilgrimage to Mecca beginning in 1960.

As permitted by Islamic law, Mr. Shagari was a polygamist, and he fathered numerous children. Nigerian news media said he had three wives, though Mr. Williams’s biography said he had four. Information about Mr. Shagari’s surviving family members was not immediately available.

He was the fifth child of Aliyu Shagari, who was a farmer and a trader before he became the village’s headman, and his wife, Mariamu. He studied at a Koranic school and an austere government boarding school before attending a teacher training college in Kaduna. He later returned to teach science at his old school in Sokoto.

He became active in local youth politics in his 20s and held ministerial posts in the governments that followed independence, until he fled the capital to avoid arrest after the first military coup in 1966. He returned to farm in Sokoto, where he lived during Nigeria’s bloody civil war, which started in 1967 and pitted government forces against eastern secessionists in the self-proclaimed state of Biafra.

After the secessionists’ surrender in 1970, the military leader, Gen. Yakubu Gowon, invited Mr. Shagari to Lagos to join the government as a minister of economic affairs.

General Gowon was himself overthrown in a 1975 coup led by Brig. Murtala Muhammed, who was assassinated in a coup attempt the following year, replaced as head of state by Gowon’s deputy, Brig. Olusegun Obasanjo. It was Brigadier (later Lieutenant General) Obasanjo who presided over the preparations for the return to civilian rule in 1979, when Mr. Shagari stood as the candidate of the National Party of Nigeria and won by a narrow margin.

“Basically, he was a compromise candidate,” said Dr. Utomi, the political scientist. “He had no blemishes on him. He was not particularly ambitious. Power was thrust upon him.”

After the vote, his adversaries challenged his victory, saying he had not secured the requisite electoral endorsement, but their complaint was rejected by the Supreme Court.

“The president has the whole nation as his constituency, and he should be above any petty differences between the various sections of the community,” Mr. Shagari told a news conference.

A year later, on his first visit overseas, Mr. Shagari was feted by President Jimmy Carter, who told him that the United States shared the Nigerian leader’s passion to end white minority rule in Africa. Zimbabwe, the former Rhodesia, had just achieved independence, but South Africa and Namibia remained under white rule.

In 1981, Mr. Shagari returned to the theme of liberation politics on a glittery state visit to London, where he told Queen Elizabeth II in a banquet speech that Nigerians expected Britain to combat “the horrible state of affairs” in apartheid-era South Africa.

But problems were piling up closer to home. The 1983 elections drew widespread allegations of fraud. Economic woes piled up. On New Year’s Eve, the army moved in again to seize power.

The reason for the coup, the iron-fisted General Buhari said, was that his country had been “enslaved by a handful of people who had been sharing the wealth among themselves and who were determined to stay in office at any cost.”

Some high officials, notably Umaru Dikko, Mr. Shagari’s campaign manager, fled the country. But Mr. Shagari was arrested, along with hundreds of other officials.

Only in 1986 did a judge acquit him of corruption charges and order his release. And only in 1999, after a brief interlude of civilian rule in 1993, did Nigeria return to democratic rule, again under General Obasanjo, who had by then assumed the mantle of a civilian politician.