All those gleaming gifts sitting under the Christmas tree? It’s very likely they came into Australia inside one of the 20-foot (six-metre) metal boxes on which the global shipping industry is built.

A remarkable 1,503,252 of these standard-sized containers, chock-full of goods, arrived at the Port of Melbourne in the year to June – 32 per cent more than came into the port a decade ago. 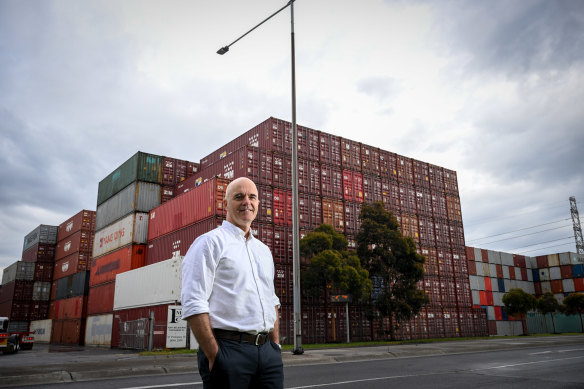 Andrew Coldrey, vice-president for the Asia Pacific region of global logistics firm CH Robinson, in front of stacks of empty shipping containers at the port.Credit:Eddie Jim

Containers are also hanging around, being stored, moved, and then moved again, before they make it back to a ship. Importers can’t get them back to the shipping lines that own them fast enough to avoid being penalised. And the penalties are mounting, hitting tens of millions of dollars each year.

Andrew Coldrey, vice president for the Asia Pacific region of global logistics firm C.H. Robinson, said: “The average time you get is seven days from the time the container is ready to be picked up to the time you have to unpack it and return it.”

Hold onto that metal box longer than that and the “detention fees” start mounting: $100 after the first week the container isn’t returned, and up to $195 once it is more than three weeks late.

Trucking companies are so short of drivers and the city’s empty-container parks are so choked that the Australian Competition and Consumer Commission is warning that Australian cargo owners don’t have adequate protection from shipping lines charging “unreasonable detention fees”. Those fees, the ACCC said, were harming cargo owners and consumers.

Melbourne’s more than a dozen empty-container parks, dotted around the port and the city’s industrial west, can hold up to 100,000 of the six metre-long boxes. Mostly, they are over capacity.

Coldrey said: “It’s happening a lot more, in both Melbourne and Sydney, that truckers will try to return containers and the parks are full, so they get turned away.”

It means another trip is created for that container, with the truck driver bringing it back to their yard and trying again to return it the next day. On top of detention fees, the extra trucking adds costs for importers – and congestion to the roads and pollution to the air.

C.H. Robinson has created a container management system that it is working with customers to introduce, aiming to help importers cut storage costs and see precisely when a container can be returned.

“The planning you need now for dealing with empty containers is far more critical because there is a massive cost impact if you don’t get it right,” Coldrey said.

Neil Chambers, of the Container Transport Alliance Australia, which represents businesses moving goods, said shipping lines were too often charging customers detention fees when they were unable to access the containers.

Shipping lines start the clock ticking on detention fees from the day the container arrives in Australia.

“The box might come off a ship today, but it won’t be made physically available to the importer and their transport operator for perhaps two days,” Chambers said. “I physically can’t go and get that container.”

Even though global shipping congestion is easing from the peaks seen during the pandemic, the supply chain has been badly disrupted.

“It’s going to take a long time to get back to normality,” Anderson said.

“If I want to hire a container for three months to move my goods around the world, it costs me $2 a day,” he said. “But I’m a day late returning it and I start getting hit by the shipping lines with these huge penalties. It’s leading to higher costs for all Australians.”