LOCKING in your mortgage rate before interest rates go up could save you big money – and lenders are now letting you get a fixed rate for as long as 40 years.

There have been hints that interest rates could increase as soon as next month. 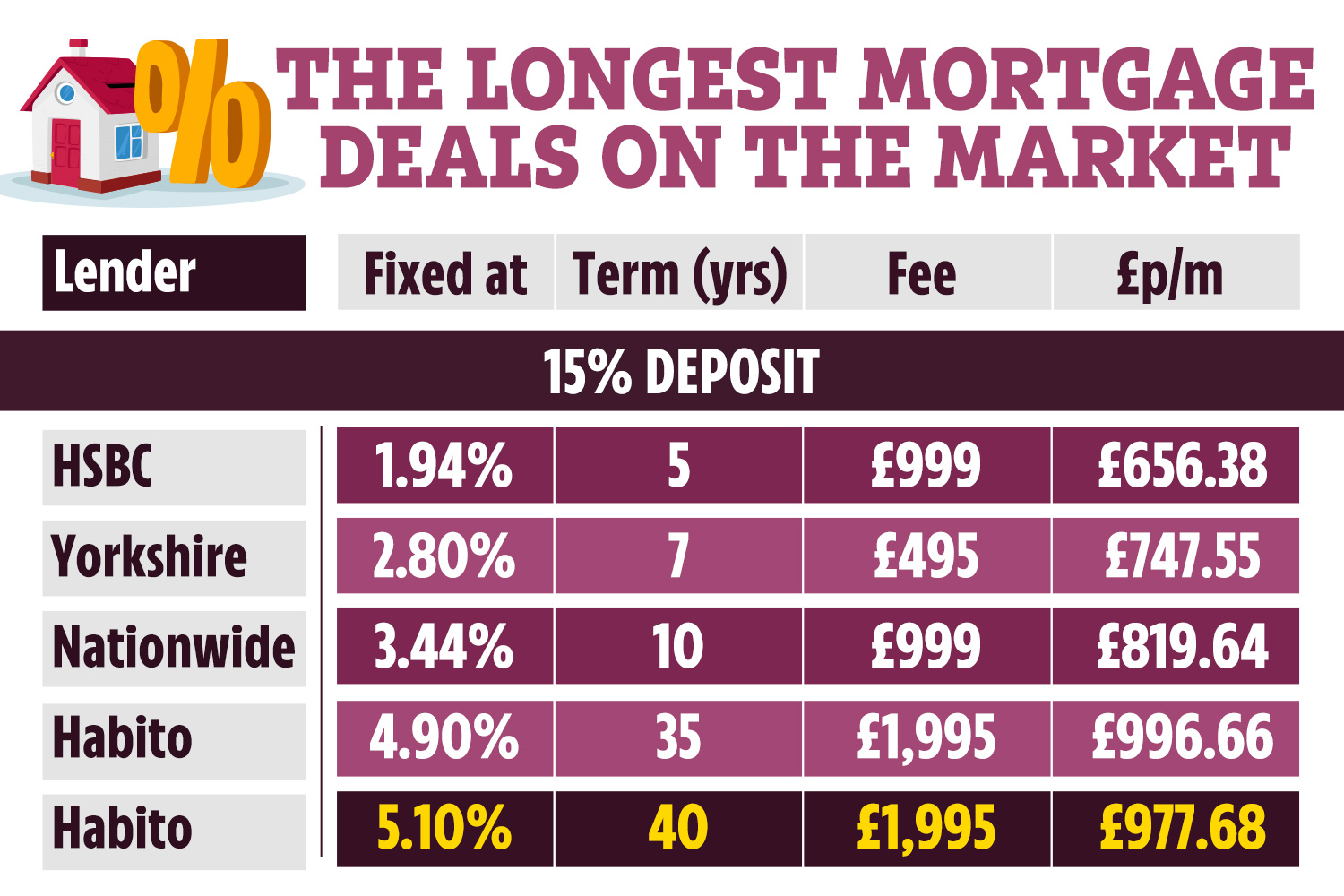 While that’s good news for savers, who might be able to earn more interest on money in the bank, it could be bad for anyone with a mortgage.

If you’re coming to the end of your mortgage deal, now is a good time to shop around and secure a cheap rate before they go up.

Fixed rate mortgages let you agree a set interest rate with the lender for a chosen period.

This is good for homeowners who want certainty over how much their monthly repayments are.

And with the Bank of England’s base rate at a rock-bottom level of 0.1%, mortgage deals have rarely been as cheap as they are at the moment.

But this could change next month if base rate is increased, as it is widely touted to do so.

Six 'secret' McDonald's menu items you can get in the UK

Anyone who is on a tracker mortgage will feel the effects of this immediately.

A tracker mortgage doesn’t have a fixed interest rate, but instead is tied to the Bank’s base rate.

That means if base rate goes down, so do your monthly repayments.

But if base rate increases, so do your monthly outgoings.

Making your monthly repayments as low as possible means you're more likely to be able to afford to overpay, and this can knock thousands off your overall interest payments.

Homeowners who regularly overpay can be mortgage-free way ahead of schedule.

If you’re on a fixed mortgage deal, you won’t feel the effects of a rate rise immediately, but you will notice it when your deal ends and you come to remortgage.

However, many lenders will let you remortgage three or even six months before your deal finishes so it could pay to shop around now to lock in a new rate while they’re still low.

If you’re considering this, you should be sure to check whether there are any penalty charges for leaving your current deal ahead of time.

You can do this by contacting your mortgage provider, which should be able to explain your options.

While two-, three-, and five-year fixed rate mortgages are most common, a host of lenders will now let you lock in for a lot longer.

Some will even give you a set rate for a whopping 40 years.

Pros and cons of a longer mortgage deal

The longer your deal, the more expensive it will be compared to shorter-term fixed deals.

But the plus side is that you will have certainty over your monthly repayments for decades.

Laura Suter, head of personal finance at AJ Bell, said: “A long-term fix will give you certainty over what you’ll pay and means you won’t be caught out by any shock increases in your monthly mortgage payments due to the Bank of England increasing rates.”

If you’re fixing for the long-term, you’re essentially betting that interest rates will continue to rise and that you’ll be securing a better deal now than you would be able to get in the future.

Suter added: “Most fixed-term mortgages have an early repayment charge, which you have to stump up for if you want to end the deal early.

“Typically this is a percentage of the amount you have outstanding on the loan, so you can be faced with a pretty hefty bill if you want to get out.

“That said, some have a sliding scale, so the cost to exit is cheaper the longer you have the mortgage.”

We've looked at some of the longest deals available to homeowners.

The longest mortgage deals on the market

If you have a 15% deposit, you can get a five-year fixed mortgage at 1.94% from HSBC, according to mortgage broker London & Country.

If you want to lock for longer, you can get a seven-year deal from Yorkshire at 2.8%.

Monthly repayments on the same loan size would be £819.

It comes with a hefty fee of £1,995 but would give you certainty over your outgoings for four decades. 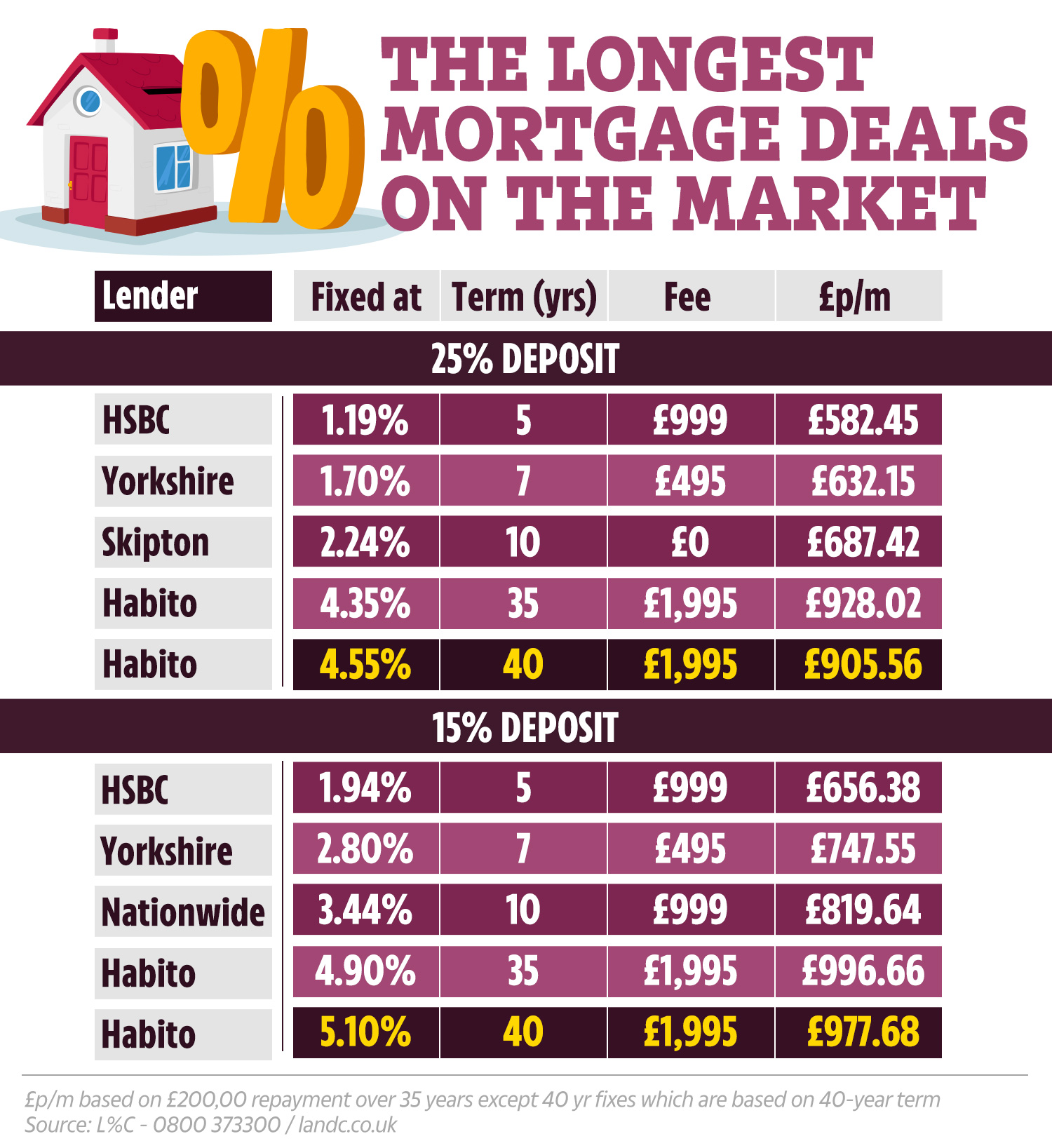 If you have a bigger deposit, you can get a better deal.

Yorkshire lets you fix for seven years at just 1.7% if you have a 25% deposit to put down.

Suter added: “You might plan to be in your home for the next 10 years but you need to consider what you’d do if there were any shocks in your life.

“What if you job was moved to another area, or your relationship ended and you’re forced to sell your home.

“All not very pleasant things to think about, but certainly things you need to weigh up before taking the leap to a long-term fix.”