First the book. Then the film. Now the musical. Based on the award-winning London production (original directors Jason Moore and Rob Ashford) Shrek the Musical has been reincarnated for the Australian stage with a home-grown cast including some serious musical theatre royalty. Add in a cracking live band, glorious costumes and one of the best dragons you’ll see this side of Westeros (costumes and puppetry by Tim Hatley), and you have a hit, a palpable hit. 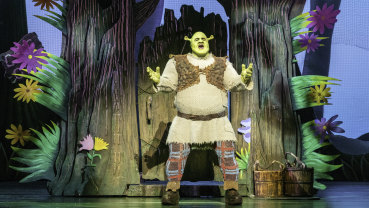 Ben Mingay is a hit as the ogre with a heart of gold.Credit:Brian Geach

Only two reservations: first, the show’s fun but forgettable score and, second, the built-in pop culture and musical theatre references, which tread a fine line between self-parody and self-loathing. Perhaps accepting yourself for who you are is the whole point.

You know the story… Shrek is an antisocial ogre. Fiona is a princess waiting for a prince to save her. Lord Farquaad wants to be king and the Donkey just wants a friend. Farquaad sends Shrek on a quest to rescue Fiona, the Donkey tags along and, after many adventures, it’s not a spoiler to say that the show ends with a wedding.

The many fairytale characters who populate Shrek’s world are created through ingenious costumes and prosthetics: fat suits, extendable noses, talking gingerbread… Initially the prosthetics, especially for Shrek (Ben Mingay) threaten to get in the way of real emotions, with the first act stodgy at times. However, Mingay’s performance shines through as Shrek’s character develops and in the second act the pace picks up.

Ben Mingay and Nat Jobe (Donkey) make a likeable duo, but the plum roles fall to Todd McKenney as Lord Farquaard and Lucy Durack as Princess Fiona. McKenney is a glorious pantomime villain and virtuoso knee-dancer, while Durack flounces and pouts and bounces off Shrek with assured comic timing and sassy charm, which makes you almost forget how good a singer she is.

Ultimately though, nothing – not even tap dancing rats and the Shrek-Fiona fart-off – can compete with the show-stopping power of the dragon who guards Princess Fiona’s tower. This magnificent puppet is operated by four puppeteers and given voice by Marcia Hines, soaring and roaring across the theatre. She’s still got it, and a bonus appearance in the finale brings the audience to its feet for the best tune in the show.

Shrek the Musical runs until February 9