Up to 150,000 casual workers will now be able to access five days’ sick leave and carer payments annually as part a $250 million Andrews government scheme to address the “toxic” effects of insecure work.

The two-year pilot program will offer casual and contract workers in hospitality, retail, aged and disability care, cleaning and security that leave at the national minimum wage of about $20 an hour or $750 a week. 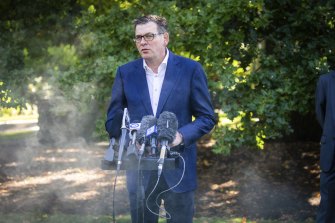 Premier Daniel Andrews said the pandemic of the past two years highlighted the difficulties of insecure work and the importance of providing a safety net for people who fall ill.

“Insecure work is completely and utterly toxic,” Mr Andrews said on Monday to mark Labour Day – a public holiday with its origins in the union movement’s fight for an eight-hour working day.

The first phase of the trial will be open to about 150,000 workers in five industries, but there are plans to expand it further. There are about 1 million casual workers in Victoria.

The 2020 state budget contained $5 million for a pilot program for the scheme. If the program is extended beyond the two-year trial, the full cost will be funded by a levy on employers. That was the issue that drew criticism from employer and business groups at the time it was first touted.

The scheme is now in place, with workers eligible to register at vic.gov.au/sick-pay-guarantee.

Mr Andrews did not provide further detail about the levy, saying that would be worked through during the two-year trial.

Then-opposition leader Michael O’Brien said the levy to fund sick pay would discourage businesses from taking on new workers as the state recovered from the pandemic-induced recession. He said industrial relations was a federal government responsibility and pro-business policies were required to arrest Victoria’s high unemployment rate.

“[Businesses] need a helping hand, not a kick in the guts.”

The United Workers Union welcomed the Sick Pay Guarantee scheme, saying it would go a long way to “bolstering the financial security for casual workers”.

“If the COVID pandemic has shown us anything, it is that casual, precarious and insecure work has ramifications for the health of the whole community,” union national secretary Tim Kennedy said.

“Let’s not squander the opportunity to make practical and positive change to ensure a better and more resilient Australia that looks after the very workers who turned up at risk to themselves and their families over the last two years.”