Simone Biles has won bronze in the women’s balance beam final after pulling out of other events at the Tokyo Olympics, citing mental health issues.

The star gymnast received a score of 14.000 in her return to competition, placing her behind Chinese gymnasts Guan Chenchen and Tang Xijing. It was the seventh Olympic medal for Biles, tying her with Shannon Miller for the most ever for an American gymnast.

Making history. Always. @Simone_Biles ties the record for the most Olympic medals won by a U.S. gymnast. #TokyoOlympics pic.twitter.com/4lXZ6waUeQ

“I didn’t expect a medal today, I just wanted to go out there for me and that’s what I did,” Biles told reporters after receiving the bronze. 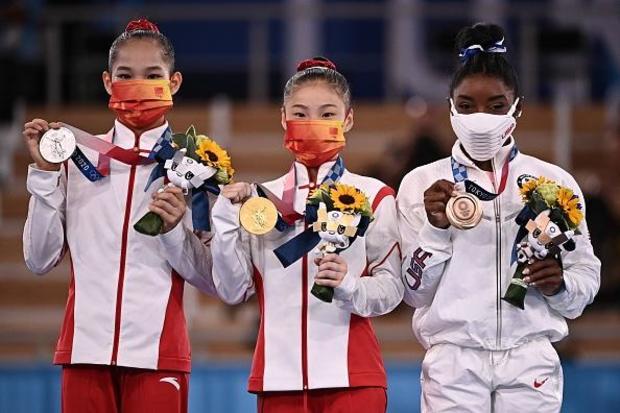 Teammate Suni Lee placed fifth after nearly losing her balance during her routine.

The 24-year-old Biles won bronze on beam in Rio de Janeiro five years ago and qualified for the eight-woman final at the Ariake Gymnastics Centre on the first weekend of the Games.

She removed herself from the team final on July 27 after a shaky performance on vault during the first rotation. She watched from the sidelines as her three American teammates completed the meet without her. The U.S. took silver behind the team known as the Russian Olympic Committee.

Biles qualified for all five individual event finals but took herself out of four of them: the all-around, vault, floor exercise and uneven bars. Lee earned the gold in the all-around, becoming the fifth straight American to claim the sport’s marquee title.

After withdrawing from the team and individual all-arounds, Biles said she became disorientated while competing on vault, which gymnasts refer to as “the twisties.” She explained that she started to have the problem after her qualifying round at the Games.

“It’s honestly petrifying trying to do a skill but not having your mind and body in sync,” she said. “10/10 do not recommend.”

She continued to defend her decision to remove herself from competition for her own safety. That thrust conversation around mental health into the spotlight.

Biles is the most decorated American gymnast of all time. She has won 25 medals at world championships and now, seven more at the Olympics, according to her Olympic page.