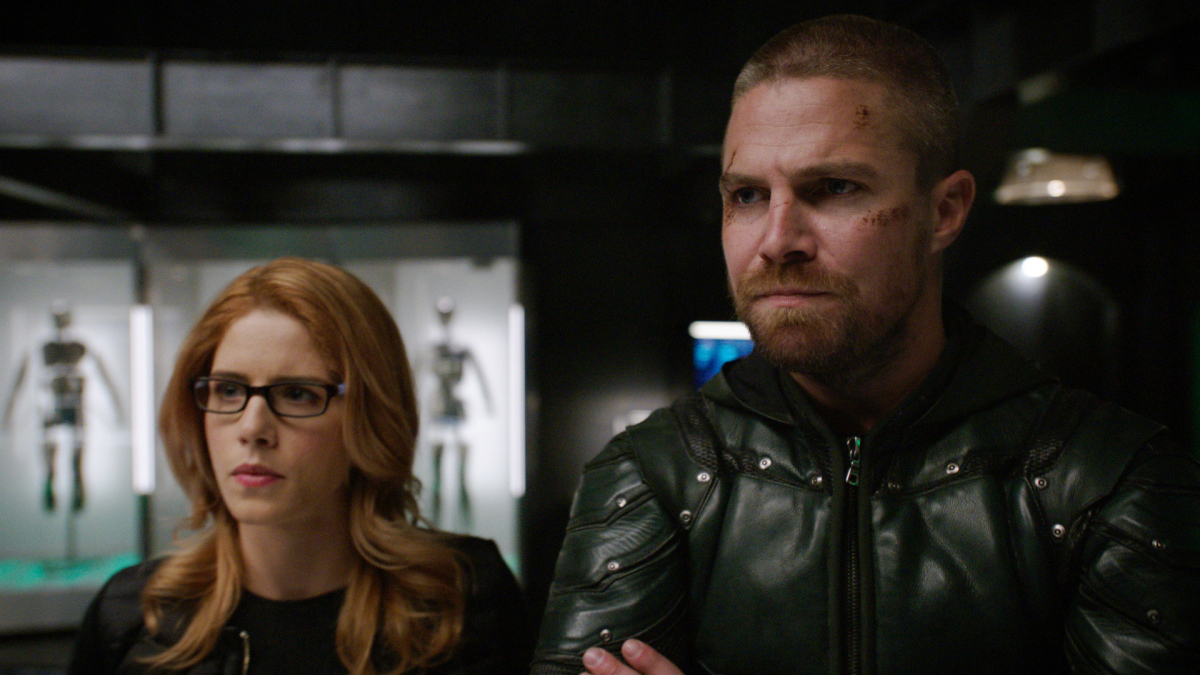 So long, Overwatch! Emily Bett Rickards bid farewell to her beloved role as Felicity Smoak during the Monday, May 13, season 7 finale of Arrow, titled “You Have Saved This City.”

Oliver (Stephen Amell) and the team thwarted Emiko’s (Sea Shimooka) terrorist attack on the city, but before his sister died at the hands of the Ninth Circle, she warned him that Felicity and the couple’s unborn daughter were not safe. So Diggle (David Ramsey) set them up with a safe house, where they lived peacefully while Mia was a baby.

The Monitor (LaMonica Garrett) eventually recruited Oliver to assist in the impending crisis he foreshadowed in the “Elseworlds” crossover. The Monitor admitted that Oliver would die in the battle, but the Green Arrow agreed to go anyway. He and Felicity said a tearful goodbye as she promised to find him again.

In flash forwards, fans learned that Oliver did indeed die in 2019. Felicity, knowing that her children were finally safe, met up with The Monitor as she told him she had waited a long time to see Oliver again and they stepped through a portal.

Rickards, 27, announced her departure from Arrow in March. “The time has come to talk of many memes. Of bows and arrows and superheroes and Olicity and Queens And why TGA is so damn hot And yes, canaries need more scenes… But wait just one minute before we go and do all of that For this makes me out of breath To have this not small chat,” she wrote via Instagram. “Felicity and I are a very tight two But after one through seven we will be saying goodbye to you.”

The actress continued: “I thank you all for the time we’ve shared The elevators we have climbed The monsters we have faced and scared And The burgers we have dined I will keep her in my heart for always And I hope that you can too Because she would not be alive if it weren’t for all of you Love, Felicity and Me.”

Amell, 38, reacted to the news in a tribute to his onscreen wife/offscreen best friend days later. “For me… August 3rd, 2012 is the most important day in the history of our show. It was the first day I worked with Emily. Her energy and the vibrancy she gave to Felicity Smoak is only surpassed by what she personally gave to me,” he gushed in an Instagram post. “She was a co-worker that became a best friend. So on the first day of our last episode together, I’d like everyone to know how deeply I appreciate the past seven years.”

The Teenage Mutant Ninja Turtles star concluded by personally thanking his pal and wishing her well. “EmBett… We wouldn’t be here without you,” he noted. “I love you. And I cannot wait to see what you do next.”

The CW confirmed in March that season 8 would be Arrow’s last.

Rickards first appeared as a guest star in episode 3 of the DC series. She was quickly upgraded to a series regular.

Arrow will return to The CW this fall.