The Reserve Bank of Australia and the International Monetary Fund are urging governments to spend more money in the event of a second COVID-19 wave as economists warn the unemployment rate will hit at least 10 per cent.

Businesses are demanding the federal and state governments give thousands of dollars in "survival payments" to companies and sole traders in metropolitan Melbourne hamstrung by the tougher limits which will effectively close down the city from midnight Wednesday. 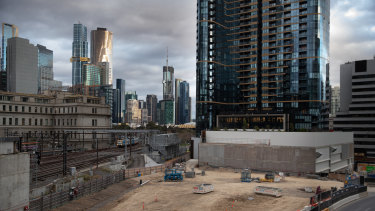 The deserted construction site of the Melbourne Quarter project on Collins Street. The city’s stage four restrictions are expected to push the national jobless rate to at least 10 per cent by year’s end.Credit:Simon Schluter

The restrictions are tipped to push the national jobless rate to its worst level in more than 25 years as employers warn plans to get coronavirus cases to zero will force more businesses to shut permanently.

The RBA board on Tuesday held official interest rates at 0.25 per cent with governor Philip Lowe revealing the stage four restrictions in Victoria had forced it to reconsider is baseline forecasts for the national economy.

It now expects the economy to contract by 6 per cent this year before growing by 5 per cent in 2021. The bank believes unemployment, which the federal Treasury only a fortnight ago forecast to peak at 9.25 per cent by December, will reach 10 per cent by year's end and take at least two years to gradually fall to 7 per cent.

Unemployment at 10 per cent would mean an extra 340,000 people out of work on top of the almost 1 million already without a job.

"It is likely that fiscal and monetary stimulus will be required for some time given the outlook for the economy and the labour market," he said.

The IMF, in a report released overnight on the trade issues facing economies around the world, also warned the economic impact of a fresh coronavirus outbreak would have to be offset by the federal government.

"The authorities should stand ready to provide additional stimulus if necessary, and particularly in case of a renewed COVID-19 outbreak," it said.

The report was compiled before Victoria's stage three restrictions were put in place. 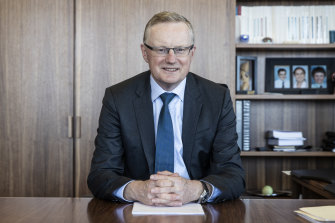 RBA governor Philip Lowe says ongoing government support will be needed to help the economy out of the coronavirus recession.Credit:Louie Douvis

The outbreak of hundreds of new cases in Victoria has prompted fierce debate about whether Australia should adopt a New Zealand-style elimination strategy, involving tougher upfront restrictions, rather than a suppression strategy with ad hoc shutdowns as outbreaks occur.

"Those who argue that an elimination strategy is possible because some states have no recorded cases miss the point that to achieve that outcome we would need to permanently shutter our economy to most of the world. If we did that the damage would be even more catastrophic than it is already," Mr Willox said.

"The only option is to live with the virus and have a measured bushfire type response to taking precautions and dealing with outbreaks."

KPMG estimates the Victorian lockdown will result in $830 million in lost output in August and another 130,000 workers out of work because they are in jobs unable to be worked from home such as manufacturing and construction.

UBS predicts unemployment will reach 10 per cent compared to a previous expectation of an 8 per cent peak.

"Ultimately, there are going to be doomsayers out there saying going into stage four restrictions is going to create a huge amount of economic disruption," Dr Rynne said.

His analysis showed a significant economic impact expected for Victoria from the increased restrictions, with sectors "relatively untouched to date" now affected.

Victoria's unemployment rate has climbed to 7.5 per cent since the pandemic. An extra 130,000 unemployed, on top of the 2566,000 Victorians already without work, would take the jobless rate beyond 11 per cent. 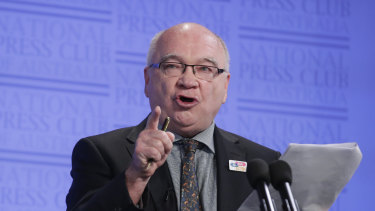 Council of Small Business Organisations Australia chief executive Peter Strong said elimination was a worthy aim, but questioned whether it was achievable with suppression remaining "the main view of members".

COSBOA is proposing a swathe of measures to help small companies pull through including "survival payments" worth $10,000 which would be paid to all businesses, sole traders, partnerships and family trusts in restriction-affected locations.

There were 904,000 businesses registered in Victoria in July 2020, according to Australian Securities and Investments Commission data.

"Until a vaccine is available, and without closing Australia's borders indefinitely, suppression is the only option and that requires governments to rapidly improve infection control and contact tracing," Mr Guerra said.

But Grattan Institute health program director Stephen Duckett said aiming for "zero" cases was "better for the economy and better for health".

"They are not a trade-off," Dr Duckett said. "A serious outbreak has serious consequences for the economy."

"Our view is a longer lockdown would eliminate the virus in a shorter period of time than a looser approach.

"Businesses [calling for an end to restrictions] are being extraordinarily myopic and assuming there will be no future outbreaks," he said.